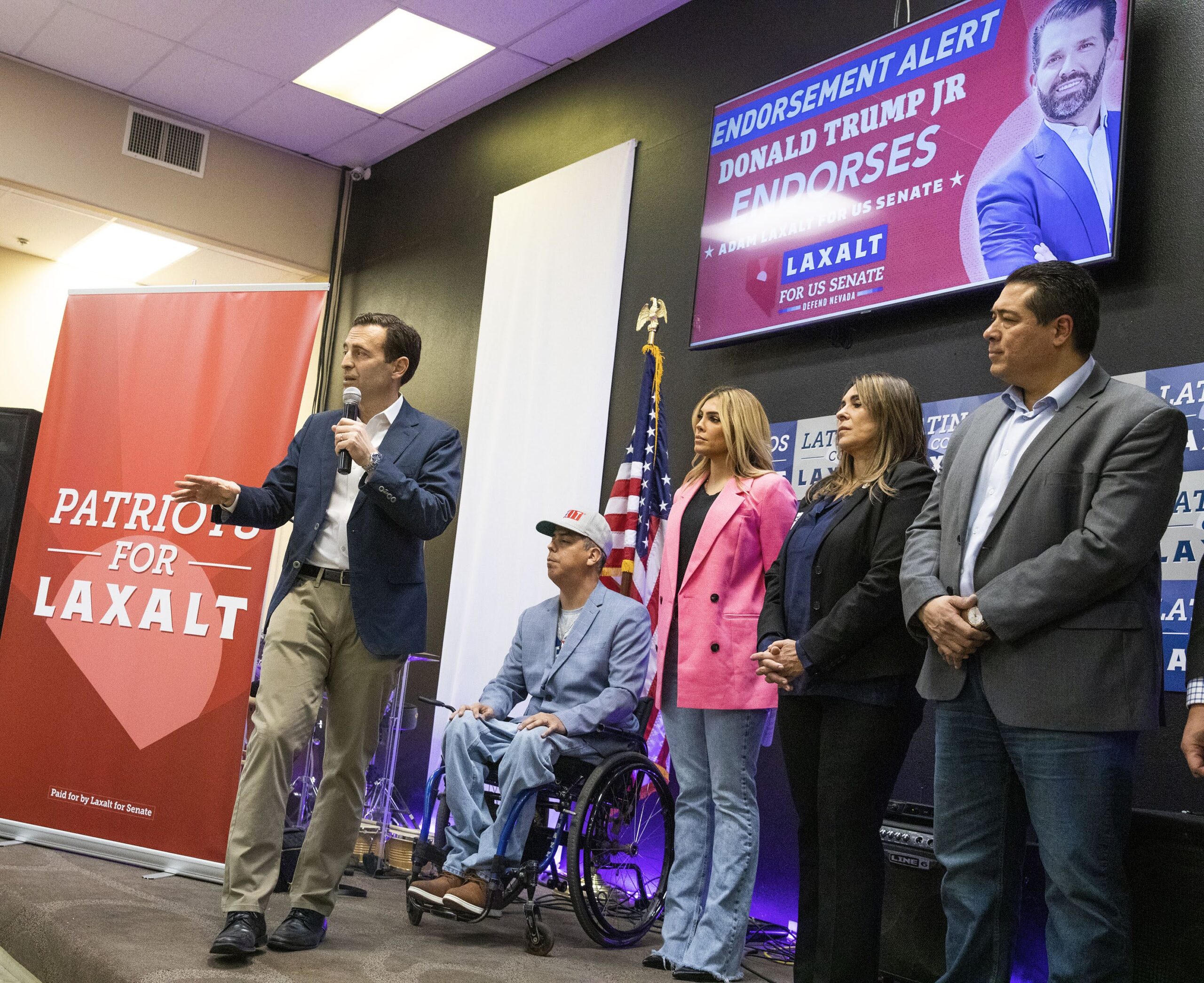 Inside a packed wing of the spacious Bonito Michoacan — a Mexican restaurant in the heart of Las Vegas’ urban sprawl — Republican Senate candidate Adam Laxalt had a message for Latino voters: This is an election about policies.

“The only thing we have to look forward to is that people are waking up to it,” Laxalt told the crowd. “They’re throwing the Democrats off. They know these policies are dangerous and toxic for our kids, for our country.”

Layered on top of his traditional stump speech material — largely calls to “take our country back” from “radical leftists” or “socialists” within the Democratic Party establishment — Laxalt pushed hard on the notion that Latinos were fleeing the Democrats, and cast the GOP as a party that would “represent a set of values that attract the standard voter, not just for this year, but for a generation.”

It’s part of what his campaign has billed as a concerted strategy — “Latinos for Laxalt” — to accelerate a trend laid bare in 2020: That demographics are no longer destiny, and Hispanic voters may no longer be the central pillar supporting the Democratic Party.

As recently as 2018, Latinos were not only critical to Democratic fortunes, but tied directly to them, according to post-election autopsies examining the win of (relative) political neophyte Jacky Rosen over longtime Nevada Republican politician Dean Heller in the race for Senate that showed a 2-to-1 advantage for the Democratic Senate candidate among Latinos.

But 2020, beset by plague and by rocky economics and by social unrest, laid the groundwork for a seismic shift in Latino politics in some of the states in which they are the most populous. In both Texas and Florida, Latinos flipping from blue to red erased critical urban margins and propelled Republicans to wins across critical battleground races.

Incumbent Democrats weathered the storm in key races across Nevada, buoyed by a commensurate blue-shift of college-educated white voters in the suburbs and by smaller shifts among non-white voters than in other states.

And though Latinos are still majority-Democrat in Nevada, the shift toward Trump has chipped away at the edges, according to a post-election analysis by Equis Research, as voters began devaluing immigration as a primary concern over the economy.

But so too has there been a social component, as some Latinos — especially religious conservatives — have broken with Democrats over social issues, notably abortion and gay marriage.

That was the case for Cristina Aguilera-Ramos, a former Democrat — now Republican — who was one of several speakers introducing Laxalt, and who spoke to The Nevada Independent in an interview. A one-time California resident who worked for a Democratic congressman, Aguilera-Ramos said that it was the abortion issue, in particular, that was her final straw.

In Nevada, Democrats say they aren’t taking their Latino base for granted. Incumbent Democrat Catherine Cortez Masto — the first Latina ever elected to the U.S. Senate — has been advertising in Spanish (in addition to blanketing the airwaves in English) since March.

Even beyond the official campaign, Democrats maintain a sophisticated and well-funded internal operation designed to mobilize the Latino base. In Las Vegas, it has manifested through the powerful Culinary Union, which just last week reported $32,000 in in-kind canvassing to Cortez Masto’s campaign through an affiliated political action committee.

Meanwhile, in the national landscape, the cogs of the Democratic dark-money machine have been turning at speed for months, largely on the back of millions spent by Somos PAC, a Latino voter mobilization group that committed $4 million to help Cortez Masto (and attack Laxalt) during the final months of the primary campaign season.

All the while, even amid midterm election trends that will likely lower turnout relative to a presidential election year, the share of the Latino electorate is expected to grow by nearly 6 percent this year relative to the last midterm cycle — exceeding record Latino turnout from 2018.