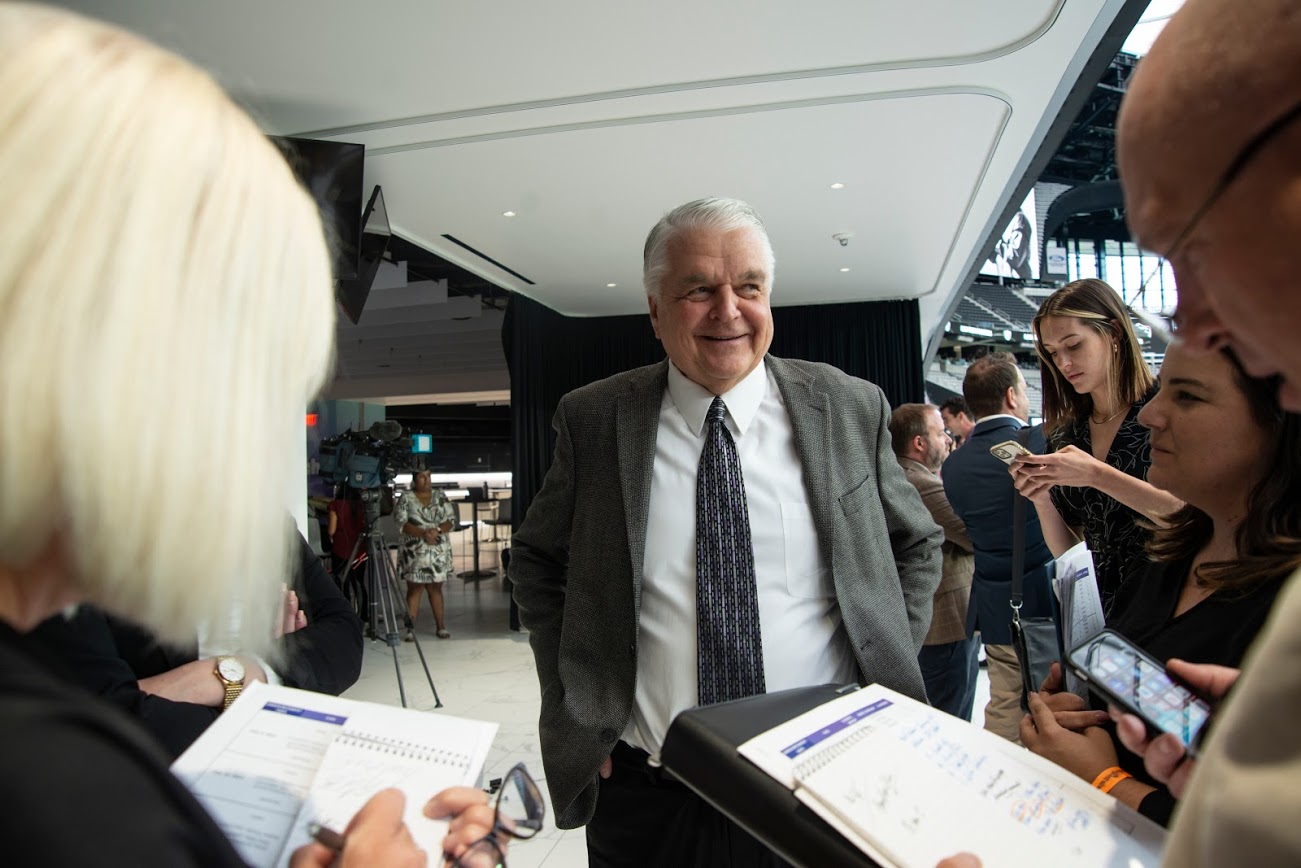 As the number of people registered with non-major parties outpaces those registering as either a Democrat or Republican, a new poll released Sunday by The Nevada Independent indicates the leanings of independent voters who will play a major role in determining the outcomes of tight gubernatorial and U.S. Senate races.

“There's a small number who really are on both sides — swing voters who could really go either way,” Mellman said. “There's some number of people who are really just ill-informed, disengaged, disenchanted, don't like either party … but the overwhelming majority of these nonpartisan registrants are actually just partisans who don't want to take a party label.”

Despite a slight preference for Republican candidates, 60 percent of non-major party voters surveyed indicated that they supported keeping the landmark U.S. Supreme Court ruling of Roe v. Wade in place and preserving the right to an abortion, compared with 25 percent who said they supported overturning it. The split aligns with the results of the statewide poll, in which 60.4 percent of respondents said they supported the ruling and 25.7 percent wanted to overturn it.

Abortion issues are likely to be a central issue in 2022 races, amid a push from GOP-led states to impose increasingly strict limitations on abortions. Heller promised to “get the most conservative abortion laws that we can have in this state” during his campaign announcement.

And although Republican candidates have made questioning the validity of the 2020 election a main talking point — despite the secretary of state office’s determination that there was no evidence of “wide-spread fraud” in Nevada’s 2020 election — only 31 percent of the non-major party survey respondents indicated that they believe Biden won through fraud, compared with 69 percent who believe Biden won Nevada fairly. The results of the statewide poll found similar results, as 35 percent of likely voters said they believe Biden won because of fraud.

In line with the results of the statewide poll, 63.9 percent of non-major party respondents viewed the governor’s handling of the pandemic as negative, compared with 31.5 percent who said it was positive.

Though Republican candidates have pushed against mask and vaccine mandates, more than half of respondents indicated that they favored indoor masking (58.8 percent) compared with a little more than a third (38.3 percent) who said they opposed it. When it came to the question of vaccine mandates, nearly 50 percent of respondents said they supported the policy, compared with 44.1 percent opposed.

Mellman warned that Republicans face a strategic calamity when navigating the primary and then the election.

Among women, Sisolak carried an 18-point lead over Heller (49.9 percent to 31.9 percent), but that lead narrowed to less than 8 points against Lombardo (44.8 percent to 37.3 percent). Heller and Lombardo both led Sisolak by about 17 points among male non-major party voters.

Of those surveyed who identified themselves as being of Latino, Hispanic or Spanish descent, Sisolak led Heller and Lombardo by more than 30 points each. And within the group of non-major party likely voters aged 18 to 39, Sisolak led each of his potential opponents by roughly 17 points. Those differences mirror the results of the statewide poll that saw Sisolak leading his potential opponents by similar margins among likely voters in those three demographic groups.

Compared to Heller, Lombardo performed significantly better against Sisolak among non-major party respondents in Clark County (Lombardo won two elections for the nonpartisan position of sheriff in 2014 and 2018). Among respondents in that group, Lombardo trailed Sisolak by 2 points (41 percent to 43.5 percent), whereas Heller fell nearly 9 points behind Sisolak (37.9 percent to 46.6 percent).

But respondents outside of Southern Nevada gave Heller significantly higher favorability ratings than Lombardo. Among non-major party votes outside of Clark County, 38.6 percent rated Heller favorably, compared with 25.8 percent who rated him unfavorably. Roughly 22 percent of those surveyed in that group rated Lombardo favorably, and the same number of people rated him unfavorably. In comparison to Heller, more than twice as many respondents outside of Clark County had never heard of Lombardo.

Unlike the statewide poll, results of the non-major party voters poll did not distinguish between Washoe County respondents and respondents living in the other 15 mostly rural counties.

Against Sisolak, Lombardo also fared significantly better than Heller with non-major party respondents who self-identified as moderates. Among respondents in that group, Sisolak led Heller by nearly 8 points (43.4 percent to 35.5 percent) but was nearly even with Lombardo (37.6 percent to 37.2 percent).

Though a separate poll of statewide voters of all party registrations was more favorable to the Democratic candidates, Mellman said the negative perception of Democratic candidates in the 2022 midterm matchups reflects the slight Republican leaning of non-major party voters in Nevada and the pandemic’s negative effects on the economy.

“When people are not pleased with the way things are going, they tend to take it out on the party in power, the incumbents and the incumbent party in the White House,” Mellman said. “And that’s why this environment is difficult for Democrats.”

Cortez Masto’s almost 3-point lead among non-major party voters was buoyed primarily by those who identified as moderate, as she led Laxalt by nearly 15 points among voters in that group (42.5 percent to 27.9 percent). However, more than 24 percent of people in that group were undecided.

Both candidates were rated more favorably than unfavorably by respondents — 37.7 percent rated Cortez Masto favorably, compared with 34.5 percent who had an unfavorable impression of her. Impressions of Laxalt were slightly closer (27.5 percent favorable to 25.3 percent unfavorable). But Cortez Masto may have benefited from name recognition. Less than 6 percent of respondents said they had never heard of her, compared with nearly 17 percent who said they had never heard of Laxalt, the former state attorney general.

Leading Republican candidates, including Lombardo and Heller, have centered their campaigns around providing support for law enforcement and portrayed themselves as defenses against progressive calls to “defund the police” and divert more funding from law enforcement to other causes, such as social services, education and mental health providers.

The poll found that a majority of respondents (62.9 percent) still favor ensuring that “police have the tools and support they need to deter crime and catch criminals.” Only 32.2 percent of respondents said they favored fundamental reforms of policing and the criminal justice system — splits that align with the results of the statewide poll.

Lombardo has positioned himself as having a “zero tolerance” policy for illegal immigration, while Heller has historically had a more fluid position on immigration.

As some GOP-led states have pushed to ban teachings of “critical race theory” — an exploration of how racism is embedded in law and how social institutions in the U.S. perpetuate policies that harm people of color — Lombardo and Heller have both taken stances opposing the teaching of critical race theory in public schools.

A majority of non-major party respondents (54.7 percent) agreed with the statement that the country is not systemically racist and that “people of color in America may experience racism as a result of the views of some individuals.” Conversely, 43.4 percent of respondents expressed the belief that people of color in America do experience systemic racism that is built into the country’s society and policies. Those splits are roughly the same as the results from the statewide poll.

“Democrats [are] very different from both independents and Republicans on this,” Mellman said about the question. ”Independents very much in the middle, but those independents [are] evenly divided by the slight tilt toward saying there is systemic racism. It's the Republicans who are overwhelmingly saying there's no such thing.”

Though the view that American society is not systemically racist was most commonly shared by white non-major party respondents, especially white men and those older than 50, about 44 percent of those surveyed who identified themselves as being of Latino, Hispanic or Spanish descent agreed with that view. A majority of women (52 percent) and non-major party voters aged 18 to 39 (50.4 percent) said they believe people of color experience systemic racism.