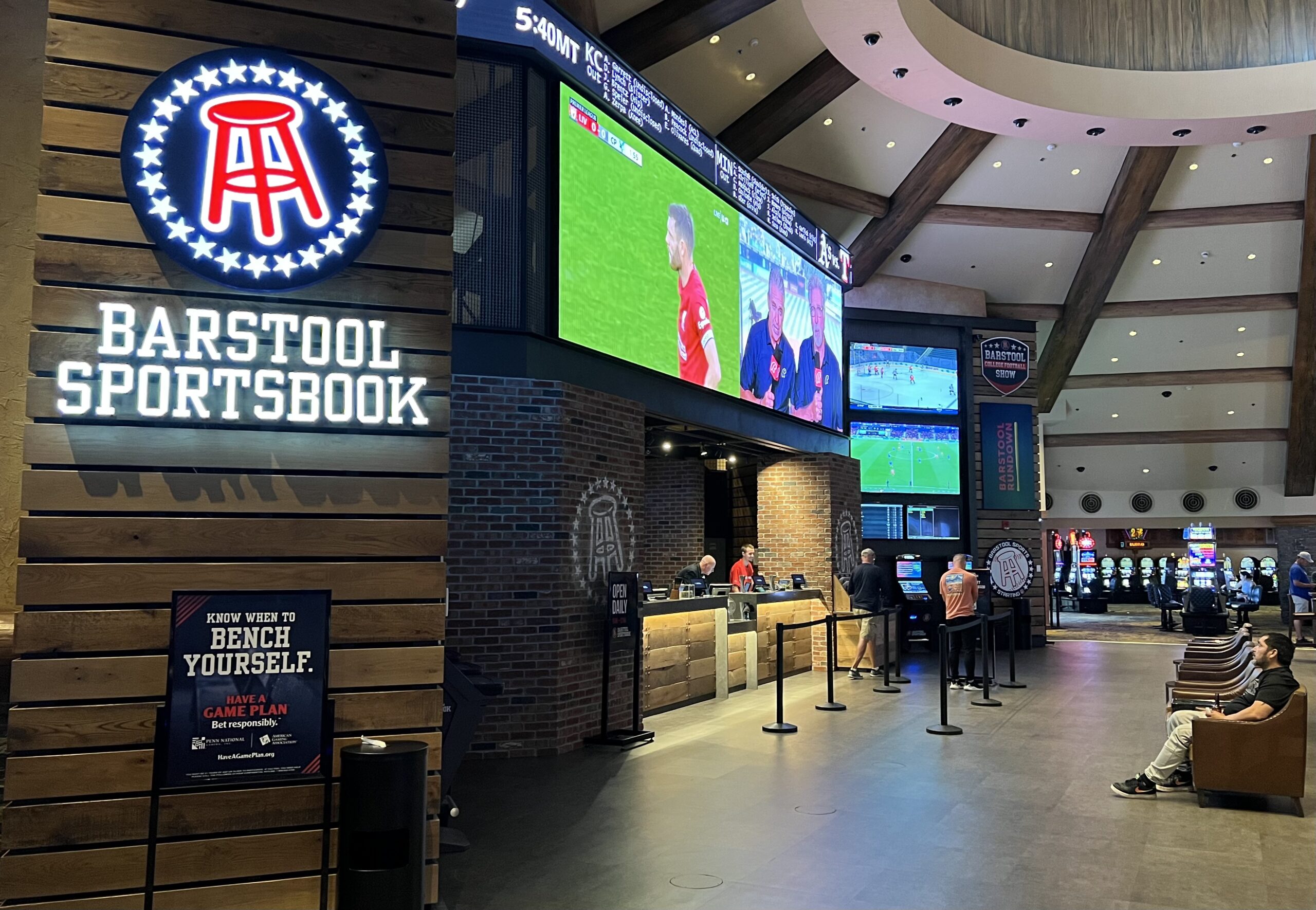 Note: There will not be an Indy Gaming Newsletter on Nov. 30.

It wasn’t a good weekend for the sports betting industry.

On Sunday, DraftKings revealed that hackers stole some $300,000 in customer funds through a series of compromising moves to wagering accounts, which led to unauthorized bank withdrawals. DraftKings is committed to paying customers any money lost in illegal intrusions.

DraftKings’ stock price, however, tumbled nearly 10 percent on the news before regaining its footing.

The newspaper published a four-part series following a nearly yearlong investigation into the national expansion of legal sports betting and questioned some of the consequences.

One article covered Penn Entertainment’s acquisition of Barstool Sports and the company’s continued relationship with Barstool founder Dave Portnoy, who was accused of sexual misconduct charges by online publication Insider.com last year and was termed a “degenerate gambler” by the Times in the story’s headline.

Nevada gaming regulators have questioned Penn about Portnoy. The company, which operates M Resort in Henderson, does not have its Barstool brand in Nevada and declined comment on the Times article.

The response from the gaming industry to the stories ranged from hyperbolic to measured.

The American Gaming Association, the industry’s Washington, D.C.-based trade organization, offered a reasonable reaction on social media late Sunday, saying in the first of a half-dozen Twitter posts that the Times had “several mischaracterizations” in their reporting.

“We'll continue our investment in advancing a safe, well-regulated environment that protects consumers and generates benefit for communities,” the AGA wrote.

David Briggs a co-founder of GeoComply, a Canada-based geolocation and anti-fraud company that services the gaming industry, wrote in a LinkedIn post that “sports betting has been a successful example of how to demolish a source of revenue for organized crime.”

Las Vegas-based gaming industry advisor Brendan Bussmann said the stories clearly prove the industry needs to better educate its stakeholders, not only advocating the reasons for additional legislation and regulation but to overcome “the fiction that was promulgated as part of this story.”

Bussmann, the managing partner of B Global, said gaming is “one of the most regulated industries, and the portrayal that it is anything less in this series of articles is ludicrous.”

The rapid growth of sports betting has outpaced the growth of any form of legalized gambling.

Following a May 2018 decision by the U.S. Supreme Court that opened sports betting across the nation, 31 states and Washington, D.C., currently have legalized and regulated sportsbooks and/or online sports wagering. Another five states are expected to launch the activity by early 2023.

If sports betting was a sprint, casino expansion was a marathon.

South Dakota became the third state behind Nevada and New Jersey to legalize casinos in 1989. In the past 33 years, the number of commercial casino states has grown to 34. Tribal casinos, which started their nationwide expansion in 1988, are now in 30 states.

Even state lotteries, which launched in New Hampshire in 1964, finally grew to 44 states in 2019 when Mississippi approved the activity.

Growing pains were an expected outcome of sports betting.

“We're heavily regulated by the federal government and thousands of dedicated professionals across legal gaming jurisdictions set and enforce regulations,” the AGA wrote in its tweet thread. “There's a high bar to clear to receive and retain a gaming license and any assertion to the contrary is false.”

Meanwhile, responsible gaming has grown from Harrah’s (now Caesars) Entertainment putting a 1-800 phone number for Gamblers Anonymous on slot machines to most casino companies making available information that describes responsible gaming programs, policies and practices and where to find assistance.

In the last few years, the AGA established the “Have a Game Plan” program for sports betting that includes partnerships with sports teams and leagues and promotes responsible wagering habits.

Bussmann suggested the sports betting industry needs to increase that effort with college and university sports programs to educate students on responsible gaming and the warning signs surrounding offshore sites.

“Betting on college campuses is happening today,” Bussmann said. “Having a partnership with an operator only supports those educational initiatives that have lacked for decades."

On Tuesday, the Massachusetts-based International Center for Responsible Gaming, which was founded by the gaming industry in 1996, announced a $180,000 donation from sports betting operator BetMGM to support the organization’s research and education on responsible gambling and the effect advertising has on problem gambling.

A week after private equity giant Apollo Global Management said it was selling its 22 percent ownership in gaming equipment provider AGS, its two representatives on the Las Vegas-based company’s board departed their positions.

The resignations of Apollo Partner and Co-Head of Private Equity David Sambur, who served as AGS chairman, and Apollo Partner Daniel Cohen were not a surprise, given the firm’s stock sale, which closed last week. The announcement came in a filing with the Securities and Exchange Commission.

Apollo held the ownership stake in AGS since 2013. During that time, Apollo directed the acquisition of 20 different gaming businesses, the largest being slot designer and supplier Cadillac Jack in 2015. Apollo also took AGS public in January 2018.

Apollo’s 8.2 million shares of AGS were sold for $41 million last week according to an SEC filing. Shares of AGS, traded on the Nasdaq, closed at $5.32 on Tuesday.

“We believe Apollo's exit could open up additional markets for AGS, as gaming licensing requirements in certain states likely proved too extensive for Apollo to go through given a planned eventual exit,” Stantial wrote.

B Riley Securities gaming analyst David Bain said commercial and tribal casino operators have increased their purchasing of new slot machines following historically low sales during the pandemic. The lack of sales earlier this year created year-end “use it or lose it” budgets for casino slot floor executives.

“Operators cite a more acute focus on the casino floor as many hit record (cash flow) out of COVID with gaming floors as the engine and a lower non-gaming amenity mix,” Bain wrote in a research note.

In the SEC filing, the company did not say when or if new board members would be appointed.

In February, Apollo paid $2.25 billion for the operations of the Venetian, Palazzo and Venetian Expo as part of a $6.25 billion purchase from Las Vegas Sands Corp. Real estate investment trust VICI paid $4 billion for the land and buildings.

Las Vegas Sands provided Apollo with $1.2 billion of seller financing, with the private equity company putting up another $1.05 billion in cash and financing.

Stantial said Apollo’s “at-times controversial history in the gaming industry” was also an overhang on AGS.

Apollo previously owned Caesars Entertainment but sold the holdings in 2019, two years after the completion of a complicated two-year Chapter 11 bankruptcy restructuring that changed Caesars’ ownership structure and wiped $16 billion of the company’s pre-bankruptcy $25.6 billion in debt off the books.

The Nevada Resorts PAC saw 16 of their 17 endorsed Assembly candidates win their races in the midterm elections this month.

The effort, backed by the gaming industry’s leading trade group, added two more endorsed candidates to its roster after it released its third quarter contribution and expenditure report in October – Democratic Assemblywoman Elaine Marzola from Las Vegas and Duy Nguyen, a Democrat running for an open seat in Assembly District 8.

Both won their elections.

Nguyen was one of eight non-incumbent candidates backed by the PAC who won their races. Only Tiffany Jones, a Republican seeking election to Assembly District 35 in Las Vegas, lost her race.

The organization is also on record as having backed several incoming Democratic leaders to the Assembly, including presumptive Speaker Steve Yeager from Assembly District 9 in Las Vegas, who is the Democratic Caucus Leader and speaker pro tempore.

The Nevada Resort PAC raised more than $2.35 million for its 2022 election effort. In announcing the PAC’s formation in January, the Resort Association said its membership of nearly 80 casinos statewide wanted to “recruit, assess, endorse, and elect state legislative candidates in 2022.”

R&R Partners CEO Billy Vassiliadis, the resort association’s longtime lobbyist, said the week before the election, “We covered the candidates that we thought deserved support. We said before, this group isn’t going away.”

Analyst report: FanDuel will be tough to topple from its market leadership

FanDuel, a subsidiary of global online gaming giant Flutter, has not relinquished its position atop the rankings of sports betting providers in the last four years. FanDuel accounts for 40 percent of all sports betting revenue produced online.

“FanDuel enjoys just about every conceivable advantage in the U.S., from institutional knowledge to scale, from product quality to brand equity,” EKG analysts led by managing director Chris Krafcik wrote in the executive summary of the research report distributed to the firm’s clients.

The firm has numerous “key success factors,” such as product quality, which can be challenged. However, other factors, such as brand equity and its market scale, would be tough to match.

How lucrative is online sports betting?

According to EKG, revenue from online wagers accounted for more than $5.8 billion – 89.2 percent – of the $6.5 billion in total sports betting revenue collected in the U.S. since June 2018.

That’s one reason the advisory firm said FanDuel has a target on its back.

“FanDuel’s lead is considerable, but not bulletproof,” EKG analysts wrote.

The advisory firm highlights eight sports betting operators with the capabilities of cutting into FanDuel’s market, but only two, BetMGM and DraftKings, as significant threats.

However, FanDuel rapidly profited from the 2018 U.S. Supreme Court ruling that allowed states to legalize sports betting and expanded its presence as new states opened up.

“FanDuel has benefited hugely from its installed database of sports-mad, tech-savvy customers with funded wallets,” EKG wrote, saying the crossover rate from daily fantasy to online sports betting was roughly 50 percent to 60 percent.

Notably, neither FanDuel nor DraftKings operates in Nevada, although FanDuel took initial steps to gain market access. Through its partnership with Boyd Gaming, which owns 5 percent of FanDuel, the company was approved by state gaming regulators to brand the sportsbook inside Boyd’s Fremont Hotel and Casino downtown. FanDuel operates sportsbooks at Boyd’s regional casinos in eight states.

From the last three months of 2019 until the end of September, FanDuel’s share of online sports betting revenue grew from 7 percent to nearly 40 percent, despite the emergence of multiple brands and the expanded market. FanDuel also accounts for more than 20 percent of all spending on digital ads, including sports within social media platforms, advertising on ESPN.com, and having a presence on streaming services with advertising, such as Hulu.

EKG expects FanDuel to lose incremental market share to multiple brands, possibly over the next year, but not one challenger grabbing a 10 percent piece of the action. The firm believes FanDuel could eventually fall into the 30 percent-to-35 percent range.