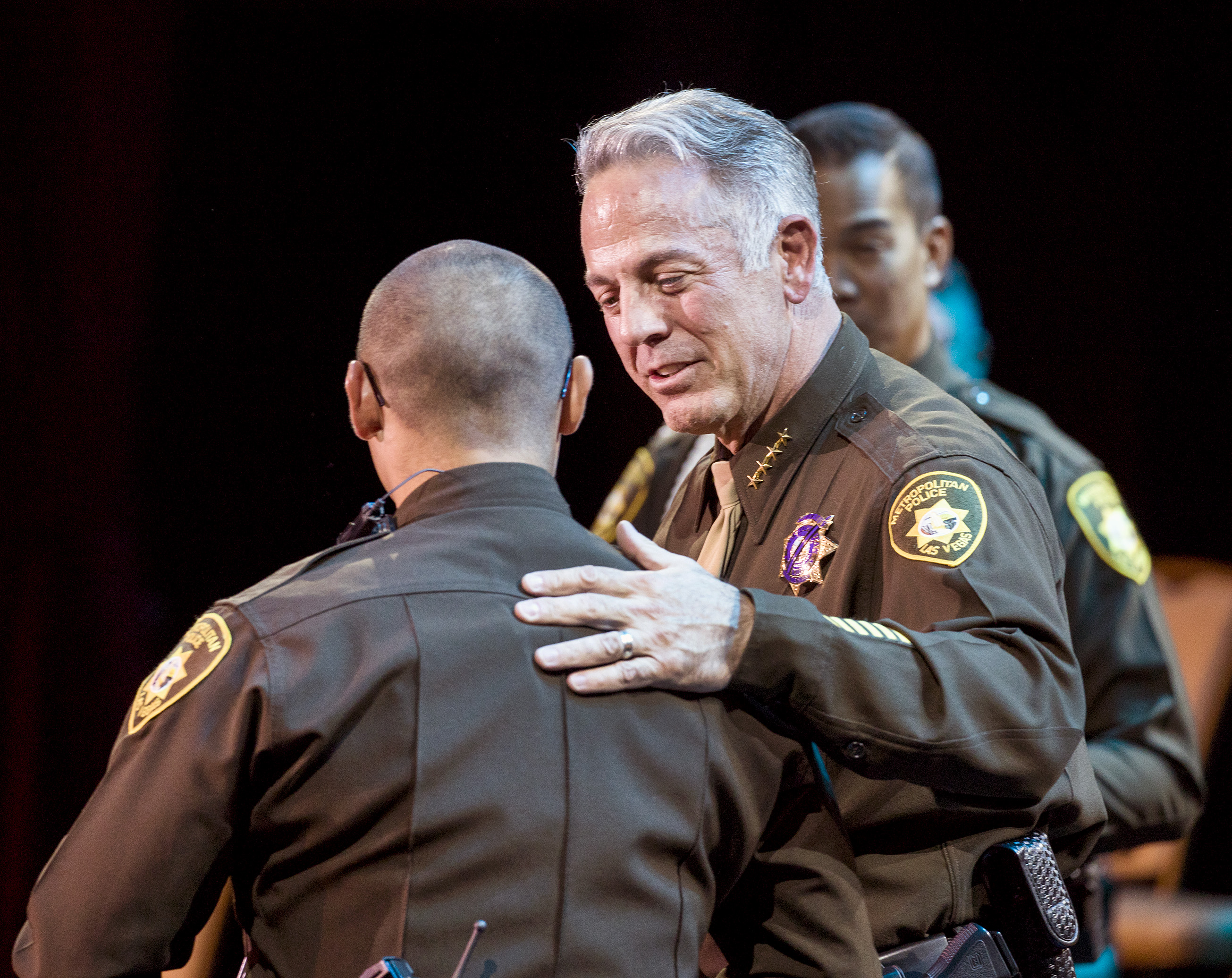 Republican gubernatorial candidate and Clark County Sheriff Joe Lombardo eschewed traditional GOP orthodoxy on firearm issues by voicing support for universal background checks on firearms sales, but also promising to repeal or restrict other gun control measures approved in past years by Democrats in the Legislature if elected.

Lombardo, who plans to kick off his campaign on Monday in Las Vegas, struck a more moderate tone than some Republican candidates on firearms issues in an hour-long Zoom question-and-answer session with members of the Nevada Firearms Coalition, the state affiliate of the National Rifle Association. Moderator Randi Thompson, the group’s lobbyist, noted that police tend to be more hesitant to encourage gun ownership “because they're dealing with it every day.”

“It's tough to be an officer and be pro gun,” she said. “But I know that you're there, protecting the people and you want to keep the honest people honest, and you want to put the bad guys behind bars and that's really all we can ask you to do at the end of the day.”

During the panel, the sheriff of the state’s largest county reiterated his support of universal background checks (while criticizing the state’s 2016 ballot background check ballot initiative as poorly written) as well as limits on certain high-capacity magazines. But Lombardo said that if elected governor, he would be willing to revisit and potentially repeal several gun control measures passed in recent legislative sessions, including the state’s so-called ‘Red Flag’ law and a measure banning so-called “ghost guns,” which are homemade firearms without serial numbers.

The deep dive into firearm policy issues and Lombardo’s more moderate stances — which included opposition to “constitutional carry” and tepid support for limits on high capacity ammunition magazines — is likely to strike a stark dividing line between the sheriff and other Republican gubernatorial hopefuls.

Lombardo also previewed parts of his upcoming campaign message, saying the job of law enforcement has become “extremely challenging” because of calls to defund the police, adding that officers don’t want to give the same effort to their jobs if they feel they are not supported by the people they serve. He also took a jab at Sisolak’s handling of the COVID-19 pandemic and some of the progressive policies discussed in the Legislature.

“Bail reform, sentencing reform, handcuffing of police, all that matters. And that's indicative of the crime rates that are occurring across the United States right now,” he said. “The crooks are getting more rights than the victims.”

Below are other highlights from the forum.

Lombardo fielded several questions on AB286, a bill banning so-called ‘ghost guns,’ that recently passed the Legislature on party lines with all Republicans opposed. The measure generally prohibits an individual from possessing, purchasing, transporting or receiving any unfinished frame or receiver of a firearm, or assembling any firearm not imprinted with a serial number.

Lombardo said that Las Vegas police have only tracked six instances of homemade, non-serialized firearms over the past 12 months. He said none of the firearms were used in a crime, and most were found in the Las Vegas Strip corridor.

The sheriff — who is named in a lawsuit challenging the constitutionality of the law — said his department was neutral on the bill because “we enforce the laws, we don’t make them in the law enforcement community” but that he would “absolutely deny” the bill as governor.

Lombardo added that Las Vegas police wouldn’t be zealous in enforcement of the new law.

Lombardo said he would be open to repealing the state’s so-called “Red Flag” or extreme risk protection order law, which gives family members and law enforcement the ability to petition a judge for a court order that allows for the seizure and suspension of firearm possession rights for up to a year, even if the person has not been arrested or convicted of a crime.

The sheriff said that law enforcement found the law to be “frustrating,” saying that the process only involved the court system and the state’s firearm sales background check system but not patrol officers, who “have no idea whether you're a prohibited person when we encounter you.”

Lombardo said that Metro has seen only two applications for the extended protection orders since the law was passed in 2019, and both of them were never processed by the state. He said that patrol officers typically don’t have a lot of knowledge about a person’s mental state to make that kind of evaluation.

“I think that law has gotten too convoluted. It's amiss in its original intent, and it's not benefiting either side of the house,” he said. “So to answer your question, yes, I would consider repealing it.”

“People that shouldn't have guns shouldn't have the ability to get guns,” he said. “There's always that mantra that folks are going to get them, no matter what; the universal background check isn't going to fix it. That doesn't mean you don't create a system that could prevent bad guys from getting guns.”

But he said he was neutral on a 2016 state ballot question on the matter because it was “poorly written.”

The ballot initiative, Question 1, passed by less than one percentage point after being opposed by all 16 other county sheriffs and most Republican officials in the state. It called for private party transfers of guns to go through licensed dealers for a background check, but there were questions about whether it could be enforced because it called for the FBI to do the checks and the FBI declined.

Lombardo said that he’s been carrying a gun for 34 years during his military service and police career, but that there should be requirements to ensure responsible and safe gun ownership.

Lombardo gave a detailed response to why applicants for concealed carry permits are experiencing significant delays in booking an appointment and having applications processed.

In Clark County, there has been a sharp increase in applications for concealed carry permits. Lombardo said that from 2017 to 2019, the county was averaging about 16,000 such applications a year, but received 37,000 in 2020, and is keeping up a similar pace in 2021.

He said he transferred four employees and a supervisor to the unit to address the application backlog, and then a few weeks ago, added another six people to the task. He said he is also increasing the number of appointments available.

But he said multiple required steps involving data transfers to the state, as well as limitations in technology — including the high costs of machines that can take fingerprints — slow the process.

“I guarantee you your viewers are going to be frustrated and they're going to be, ‘what are you talking about? It's 2021. Technology is here and it should be a lot easier to do,’” he said. “But the government is quite often years and light years behind.”

Lombardo said he opposes making Nevada a “constitutional carry” state, in which residents need not obtain a concealed weapons permit to have a gun on their person.

That’s because he supports the training requirements involved in obtaining a permit, which entail completion of an eight-hour CCW safety course and registration with the local law enforcement. Officials screen out prohibited people, including individuals who have felony convictions, are subject to restraining orders or have any of a host of other disqualifying factors.

Lombardo said the requirements are not overly onerous, and thinks mandating training as a prerequisite for a permit ensures that people actually get training.

“If we don’t require it, people won’t do it. more often than not,” he said.

Asked about his 2016 comments to the Las Vegas Sun in support of limits on high-capacity magazine sales, Lombardo said he never specified a number of rounds and that about 30 bullets per magazine, or the manufacturer's intended specifications, were “probably about right.”

He said his comments at the time were more focused on a law enforcement perspective, noting that the October 1 mass shooter had thousands of rounds of ammunition available in his hotel room, and that the breaks required to reload a gun gives law enforcement a window of opportunity to stop a shooter.

“When we encounter a critical incident or mass shooting, the only time we've ever had the upper hand in that, besides an overwhelming force …is if it was an individual officer when an assailant or suspect had to change the magazine, we have one or two seconds to intervene, hopefully stop the threat,” he said. “That was the context of that question.”

If elected governor, Lombardo said the issue of banning high-capacity magazines was a “non-starter” and “not even a discussion for me to have.”

Lombardo called for reinstating accountability measures, such as the mandate that students learn to read by grade three. Previously, Nevada law called for children to be retained if they could not read at grade level by third grade, but the mandate was eliminated in 2019.

Lombardo also said that the current arrangement in which Democrats control both houses of the Legislature and hold the governor’s post is a “failed system” that goes against the values of push and pull between two parties.

He also asserted that the politically powerful Culinary Union and the teacher’s union are running the state government rather than the governor and the Legislature.

He specifically faulted Sisolak’s handling of the COVID-19 pandemic, saying decisions about capacity limits in businesses were not grounded in science. The subjective nature of the restrictions made it hard for the people who have to enforce those rules, according to the sheriff.

“It was too willy nilly. He was moving the goalposts on a continual basis,” Lombardo said.