Mask on: How renewed mandate is playing out from the Strip to the rurals 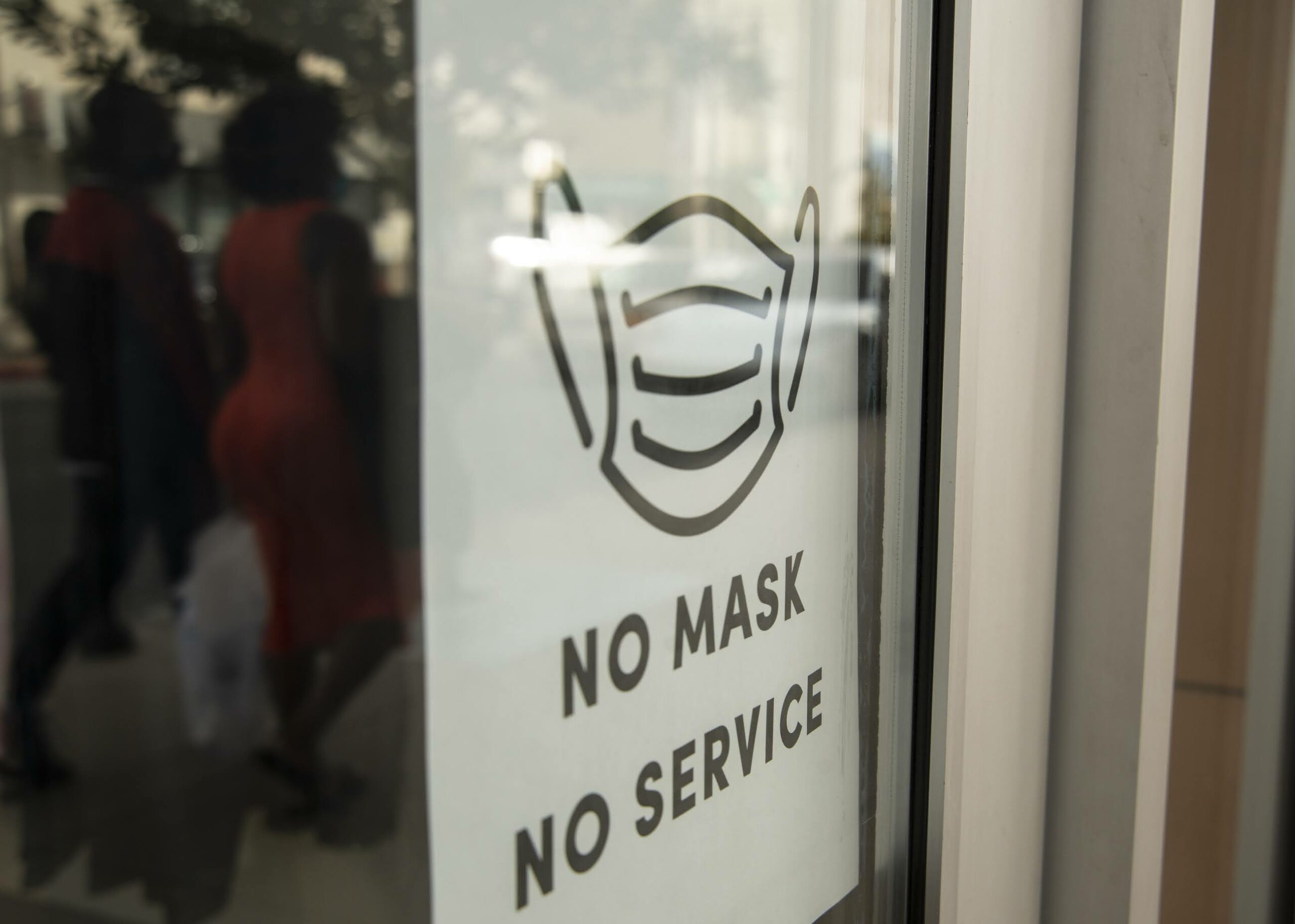 A week after the return of a broad indoor mask mandate in the state’s most populous counties, elected officials across Nevada received an earful from constituents chafing at the rule.

Roughly two months after lifting most COVID-19 related restrictions, Gov. Steve Sisolak again ramped up the state’s mitigation efforts amid another surge of cases largely attributed to the more contagious Delta variant. Nevada’s seven-day rolling average of new cases has eclipsed more than 1,000 since the end of July, and Sisolak announced Friday that the state had crossed the milestone of 6,000 COVID-19 deaths.

Michelle White, Sisolak’s chief of staff, acknowledged Friday at the state’s weekly press briefing on COVID-19 that the restrictions during the latest setback would be unpopular.

But even with more stringent steps to combat the pandemic — including mandating COVID vaccinations or weekly testing for state employees — local governments have had widely divergent responses to the situation.

“Now they're pretending that the pandemic is worsening and they need to reinstate mask mandates and business closures,” Elko County Commissioner Rex Steninger said during a meeting on Wednesday. “We can't let that happen again. We must refuse to comply this time, our local businesses depend on us refusing to comply.”

In spite of the chorus against face coverings, Nevada’s Occupational Safety and Health Administration (OSHA) said it had not yet issued many citations to businesses for mask-related violations.

As of Thursday, state Division of Industrial Relations Administrator Victoria Carreon said that OSHA has not been instructed to begin any random checks of businesses complying with the revised mask mandate or other COVID-19 safety precautions.

Instead, Carreon said OSHA was continuing to operate on a largely complaint-based model — a necessity given that the agency only employs about 40 inspectors statewide. She added that complaint volume had picked up “a bit” in the past week — an OSHA dashboard showed 65 complaints received by the agency since the mask-wearing requirement was reinstated last Friday. The agency received only 22 COVID-related complaints in the preceding four weeks.

Mask-wearing does not make someone immune to catching the virus, but CDC guidance shows that it can protect those around mask-wearers and even offer some protection to wearers themselves.

Here’s a look at how government bodies responded to the reintroduced mask mandate over the past week.

During their Tuesday meeting, Clark County commissioners discussed the idea of putting $100 in the pockets of newly vaccinated individuals, hoping that distributing dollars directly to Clark County residents would drive up a vaccination rate that remains just over 50 percent.

“I thought it was the craziest idea in the world, but then the president said ‘Oh, it’s a great idea,’ so what the hell,” said Commissioner Tick Segerblom, who proposed the idea.

The plan comes after President Joe Biden’s call for state and local governments to encourage vaccinations with cash payments. Segerblom’s proposal would allot money for up to 100,000 Clark County residents with dollars from the American Rescue Plan, which provided states with resources for incentive programs such as the Vax Nevada Days raffle.

Colorado, New Mexico and Ohio are among a number of states that have piloted $100 incentive programs. Segerblom added that The Cosmopolitan resort implemented similar payments to employees to drive their employee vaccination rates to 80 percent.

While open to the idea, some commissioners voiced concerns on the price tag — an initial $10 million allocation — and the subsequent distribution.

“I understand the goal and I think all of us have a sense that we need to do what we can,” Commissioner James Gibson said. “I'm a little concerned about the size of the commitment.”

The idea was tabled.

Chief executives from the Strip’s largest gaming operators used their quarterly earnings conference calls to alleviate those worries and boost the prices back up by Thursday.

In Nevada, the Gaming Control Board imposed mask requirements inside casinos for both employees and customers on July 27 at properties in Clark, Washoe and 10 other counties.

During a press conference Thursday in Las Vegas, Gov. Steve Sisolak said he didn’t want to impose any additional mandates or closures, calling the current mask requirement a “bridge” in helping slow the recent COVID-19 spread.

Sisolak said he would seek advice from his medical advisory team for additional recommendations on how to make large gatherings safer. The recommendations will cover crowds inside entertainment venues associated with casinos.

Sisolak cited last weekend’s CONCACAF Gold Cup soccer championship between the U.S. and Mexico at Allegiant Stadium as an example. The nationally televised game featured images of maskless fans despite the mandate that facial coverings be worn at indoor events. Allegiant Stadium, which has a translucent roof, is considered an indoor stadium. The game attracted 61,514 fans.

“Everyone that walked through the turnstile had their masks on, and 10 minutes into the match, the masks all came off,” Sisolak said. He wants the venues to also come up with plans that are “more effective for compliance and for enforcement.”

The Las Vegas Raiders are the operators of Allegiant Stadium, but a spokesman for the team did not return an email message seeking comment.

Casino operators along the Strip said they are abiding by the mask mandate. Caesars Entertainment CEO Tom Reeg said Tuesday the mask mandate was “far less onerous” compared to the restrictions the gaming company dealt with before June 1, when all COVID-19 operating guidelines and protocols were lifted.

Reeg said the current public health situation could result in “bumps along the way in terms of masks and protocols that we need to follow.” However, he said Caesars is seeing “exceedingly strong” demand from customers that “has continued to build.”

MGM Resorts International CEO Bill Hornbuckle said Wednesday it was too early to gauge any meaningful effect the current outbreak has had on business levels.

The Elko County Commission unanimously banned door-to-door “solicitation” of COVID-19 vaccines during a meeting Wednesday afternoon and decided not to enforce the mask mandate in place for most of Nevada’s 17 counties, including Elko.

Some advocacy groups, including Mi Familia Vota, have been canvassing neighborhoods in Las Vegas to encourage residents to get vaccines.

“It should be a blanket ban,” Commissioner Rex Steninger said. “Don’t come to our county and be knocking on our doors.”

Commissioner Wilde Brough said that while he’s not against vaccines and believes people should get them of their own free will, he was against the door-to-door solicitation as it could lead to “undesirables” going into people’s private space, resulting in “mischief.” Commissioner Delmo Andreozzi said he saw it as a form of “intimidation or coercion.”

“I don’t think door-to-door solicitation of your medical records is appropriate,” said Commissioner Cliff Eklund. “Just like soliciting votes, I’m against it.”

Organizers and volunteers are prohibited from seeking medical information while providing information about the virus or vaccines.

A crowd of more than 20 people at the meeting, most of whom were maskless, erupted into cheers and applause following the commissioner’s remarks. There were no public comments against either of the motions to ban door-to-door solicitation or the mask mandate.

“I wasn’t going to speak, but what I want to tell you is I'm proud of you guys,” said Assemblyman John Ellison (R-Elko) during the public comment period. “You did the right thing. Check it in advance. But what we have to do is we got to believe in the Constitution, the Bill of Rights … God bless you.”

One public commenter asked if the Elko sheriff’s office might need help in enforcing their decisions and volunteered herself as a potential “posse” member, should they need it.

The new masking guidelines also met ample resistance at Tuesday’s meeting of the Nye County Commission, which considered an item that would strengthen the county's masking rules in accordance with Sisolak’s directive.

In a public comment period, more than 40 people spoke in opposition and said they wanted to keep mask-wearing optional, including at schools, with some saying that they were constitutionally entitled to the choice.

“My child, my choice. My body, my choice,” attendee Kristy Labelle said. “And I think that's the way we should go.”

Among them was Joey Gilbert — a Reno attorney and a Republican candidate for governor.

“Unless this virus has grown by over 500 percent in the last year — because we all know that science apparently now evolves, according to the Democrats — unless this thing has grown by 500 percent, the masks don't work,” Gilbert said.

Only three people spoke in support of masking rules.

“Give us a chance to wear the mask for two months, and see if anything happens,” attendee Tom Waters said. “If the positivity rate goes down, you know the masks work.”

A few days later, the governor issued a statement on Twitter saying he was "furious after hearing vile, blatantly racist comments made against my wife" and called on every Nevada Republican elected official and candidate "to join me in calling out this bigotry."

"Kathy and I, along with so many others, have worked hard to fight back against the anti-Asian racism brought on by misinformation regarding COVID-19, but comments like these only take us backward," he said on Monday. "Now is a time we should be coming together to get us through what has been one of the hardest times in our state, not attacking one another."

At the meeting, Commissioner Leo Blundo stated his support for the Second Amendment (the right to bear arms) and opposition to critical race theory.

The commission opted to not cast a vote to align county rules with the state's directive and let the item die.

And at the Lyon County Commission meeting on Thursday, Commissioner Ken Gray called the mask mandate "political showmanship," saying that only 0.03 percent of COVID-19 cases in Lyon County are breakthrough cases and expressing his opposition to a mask mandate in the county. Other commissioners agreed.

“One of the reasons that [people] got the shot, the vaccine, was to get rid of the mask,” Lyon County Commissioner Robert Jacobson said at the meeting. “So what I’m hearing is that those people that got vaccinated are now wearing the mask because of 0.03 percent? Are you kidding?”

“If vaccination rates go up, then we can see that that mitigation effect can be there and we're less likely to have the spread and therefore more likely … to be able to take those masks off,” Freeman said.

“There have been unkind things thrown at the people who provide services for us. They have nothing to do with [making] the policy,” Page said.