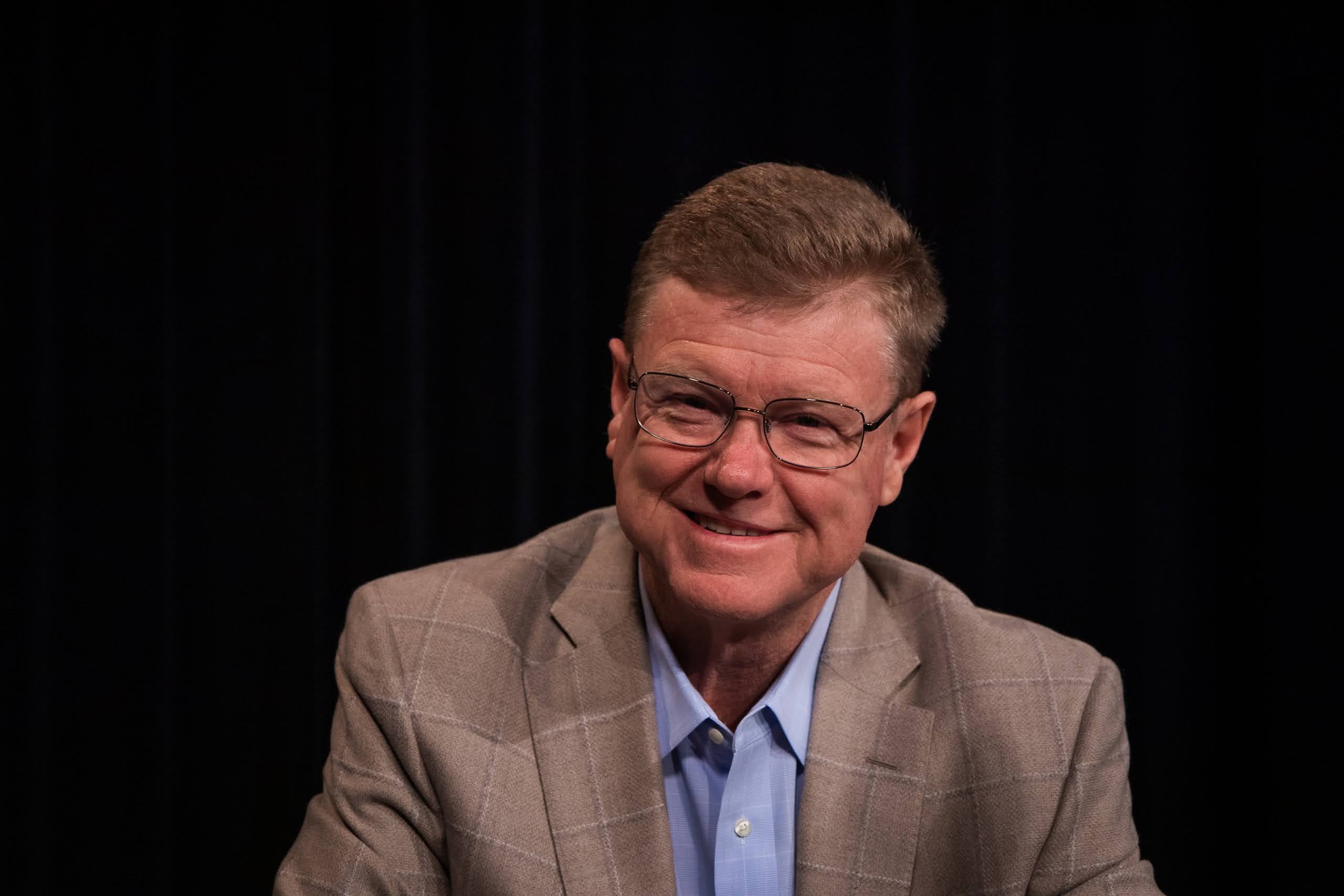 But, last November, the six-term congressman put speculation about a run for governor to rest and declared that he would seek re-election to continue representing District 2 in Washington, D.C.. Amodei said the crowded Republican gubernatorial primary and his belief that he can still make a difference in the nation’s capital contributed to his decision.

Amodei represents a reliably red district in Northern Nevada, which includes Reno, Carson City and multiple rural counties. He faces a tougher road to re-election this year, though, because of a primary election challenger — Douglas County Commissioner and perennial candidate Danny Tarkanian.

Even so, Amodei, who sat down with The Nevada Independent last week for a wide-ranging interview, said he has no regrets about his 2022 decision. The congressman said he would have quit his current elected office to campaign for governor, which he described as a “messy” departure.

“It keeps faith with your voters if you fulfill the obligation that you ask them to give you,” he said.

Amodei has a significant fundraising advantage over Tarkanian heading into the final stretch of campaigning before the June 14 primary election. But Tarkanian — who made multiple prior unsuccessful bids for Congress while living in Southern Nevada — has tried to paint himself as the more conservative candidate in the race.

The incumbent has brushed off criticism that he’s not conservative enough, saying his voting record speaks for itself.

“We'll see what most of the voters think in the middle of June,” Amodei said.

During the sit-down interview, Amodei weighed in on everything from rapid inflation and the housing crisis to abortion access and immigration. Below are highlights from the discussion:

In the aftermath of the 2020 election, some Republicans have refused to acknowledge that Joe Biden is the United States’ duly elected president. Amodei is not among them.

Asked directly whether he considers Biden the president, the congressman said yes.

Even so, Amodei expressed discontent with the pandemic-related move to mail balloting shortly before the 2020 election. AB4, which passed during a special session that same year, temporarily required all county and city clerks to send every active registered voter a mail ballot before the primary or general election. During the 2021 legislative session, AB321 made the move to expanded mail voting permanent.

“There's nothing wrong with mail voting as long as you have to show some I.D. and do something to get a ballot — instead of just being on a list and getting a ballot, which is AB321,” he said. “I don't like that.”

Last year, Amodei voted against creating a national commission to investigate the Jan. 6 attack on the U.S. Capitol. At the time, he described the events that unfolded that day an “absolute tragedy” but said his no vote stemmed from it becoming hyper-politicized.

“Even if we knew who was going to serve on this commission, I am still additionally concerned about the scope of this legislation and its potential to hinder the ongoing investigative work of other agencies and committees,,” Amodei said in a statement last May.

Nearly a year later, Amodei has not wavered.

The congressman said he feels “even better” about his vote now, noting that the U.S. House of Representatives has a handful of existing committees that could have looked into the incident. Instead, he described the Jan. 6 committee as having “made-to-order membership.”

Asked directly if he thinks former President Donald Trump bears any responsibility for what transpired on Jan. 6, 2021, Amodei said no.

“I don’t think so, after what we’ve got from the investigations that weren’t run by the Jan. 6 committee,” he said.

Amodei, however, declined to say whether he would support Trump if he were to make another bid for the Oval Office. He said it’s too early to make that judgment.

“I’ll see what he does and why he does it and we’ll go from there,” Amodei said.

The COVID-19 pandemic unleashed a wave of federal spending as the government tried to combat the virus and its related economic effects. So far, the federal government has spent more than $3.6 trillion through the Coronavirus Aid, Relief, and Economic Security (CARES) Act, American Rescue Plan Act and other supplemental legislation.

While some economists have tied the government spending to historic inflation, Amodei — who voted for the CARES Act but against the American Rescue Plan — said he is not going to second-guess the decision.

“I'm not going to say, ‘Gee, I wish we hadn't done that COVID stuff.’ It was phenomenally important to provide those payroll protection loans that kept people working and businesses open while everything was shut down,” Amodei said. “And so, yeah, I think that was the right thing to do.”

But the congressman doesn’t want to green light other bills, such as the Build Back Better Act, which he described as “agenda-driven spending.”

As for combating rising gas prices, Amodei said energy independence is the key.

Amodei called the Biden Administration’s support for Ukraine slow in terms of equipment assistance, but he stopped short of saying the United States should send troops to the Eastern European nation.

The Ukranians, he said, have proved their worthiness in terms of protecting their own soil and fighting for democracy.

“I think these folks are doing a good job of covering their own turf,” he said. “They just need the best possible equipment they can have.”

His comments loosely align with results from a Nevada Independent/OH Predictive Insights poll conducted earlier this month. Fifty-three percent of voters surveyed said they disapproved of Biden’s handling of Russia, which launched its attack on Ukraine in late February.

But survey respondents didn’t signal as much willingness to intervene with military personnel: Forty-four percent of those surveyed said the United States should not send American combat troops into Ukraine to assist, while 30 percent supported sending troops. Another 26 percent said they were unsure or didn’t have an opinion.

As the U.S. Supreme Court mulls a case that could overturn the landmark Roe v. Wade decision — which established the constitutional right to an abortion — states are forging ahead and passing more restrictive abortion laws.

When asked whether he supports weaking protections for abortions, Amodei said his belief doesn’t matter because Nevada voters have already weighed in on the issue. He was referring to a 1990 ballot measure that won approval from nearly two-thirds of Nevada voters and allows for abortions within 24 weeks of pregnancy, which reflects Roe abortion protections before a fetus is viable outside the womb.

“I've been a pro-life person when I've had a vote on something that relates to that,” he said. “But when you say, ‘What would you do with Roe v Wade?’ — it's like, guess what? Even the federal government can't come in here because of what Nevada voters have done. And I completely respect that.”

Amodei said it’s an example of a decision that should be made closer to home, adding that water rights is another issue that falls into that category.

“Quite frankly, what people in Nevada think is important is not necessarily the same as people in South Dakota or in Virginia or wherever else,” he said.

Amodei has criticized President Joe Biden’s handling of immigration, especially regarding reports of undocumented immigrants being released within the U.S.  He explained that it is “Congress’ job,” which has not been the case, he said, because immigration has become “uber-politicized.”

Nevada has an estimated 210,000 undocumented residents as of 2016, according to a Pew Research report published in 2019. The number of undocumented people in Nevada has continued to rise, Amodei said.

“It has continued to present challenges for local and state officials to deal with services for people [in Nevada]… There's criminal justice, there's public assistance, there's covered issues,” Amodei said. “Basically with an open border for the last 14 months, all of those problems have been exacerbated, whether it's rural Nevada or metropolitan Nevada.”

On the federal level, Amodei backed “compromise” immigration legislation in 2018 that would have legalized undocumented young people known as DREAMers and given them a path to citizenship. But he said he disagrees with portions of former President Barack Obama’s Deferred Action for Childhood Arrivals program, and supports “merit-based” immigration, such as the Farm Workforce Modernization Act.

In 2021, Amodei voted against a bill that would have provided a pathway to citizenship for DREAMers.

“I'm not opposed to immigration, but it's got to be merit-based. You've got to earn blah, blah, blah,” he said in regard to supporting the proposal for a legalization program for undocumented farm workers. “But you earn your ability to have a green card. And then if you want to go apply for citizenship after that, fine.”

He said that “one size doesn't fit all'' on immigration and when he is presented with a bill that would make DACA recipients “all good to go,” he cannot vote on it because some of the beneficiaries may have been convicted of crimes, such as domestic violence.

“You've still got to go through a process that is merit-based and puts you in a position where you can say, just like the people who came before you, ‘I earned this’,” he added.

As for the U.S.-Mexico border, Amodei said while he thinks the border wall was a good idea, it's not the solution, but “it was a piece of the puzzle and it helped.”

As a general rule, Amodei said he’s not a fan of suggesting what the minimum wage should be — in part, because those costs can be passed right back to consumers if businesses increase their prices as a result. He called the issue a “big balancing act.”

He said it was a “fairly responsible way of taking all those things into consideration,” referring to business implications and the Consumer Price Index.

“I’d much prefer that approach than the federal government going, ‘Here’s the number and by the way, one size fits all,’” Amodei said.

The federal minimum wage still stands at $7.25 an hour and hasn’t been raised since 2009. The congressman said he is “OK” with that being bumped higher, noting the “devil is in the details” pending a discussion about what a better rate would be and why.

Amodei said Congress needs to pass a law to allow some federal land in Nevada to be developed into housing. But he acknowledged that process hasn’t been very “nimble” the past few years in Washington, D.C.

“We can talk all you want, but unless that inventory of potential developable land — in accordance with local planning and zoning decisions — is increased, you’re going to continue to increase the pressure within the existing jurisdictional footprints of your county commission, your city councils and all that stuff,” he said.

Amodei said finding the right policies to address climate change has been difficult because of how politicized the issue has become.

Amodei said he supports efforts to figure out how to lower the nation’s carbon footprint from fossil fuels, including funneling more money to research and development to “get us farther down that road.”