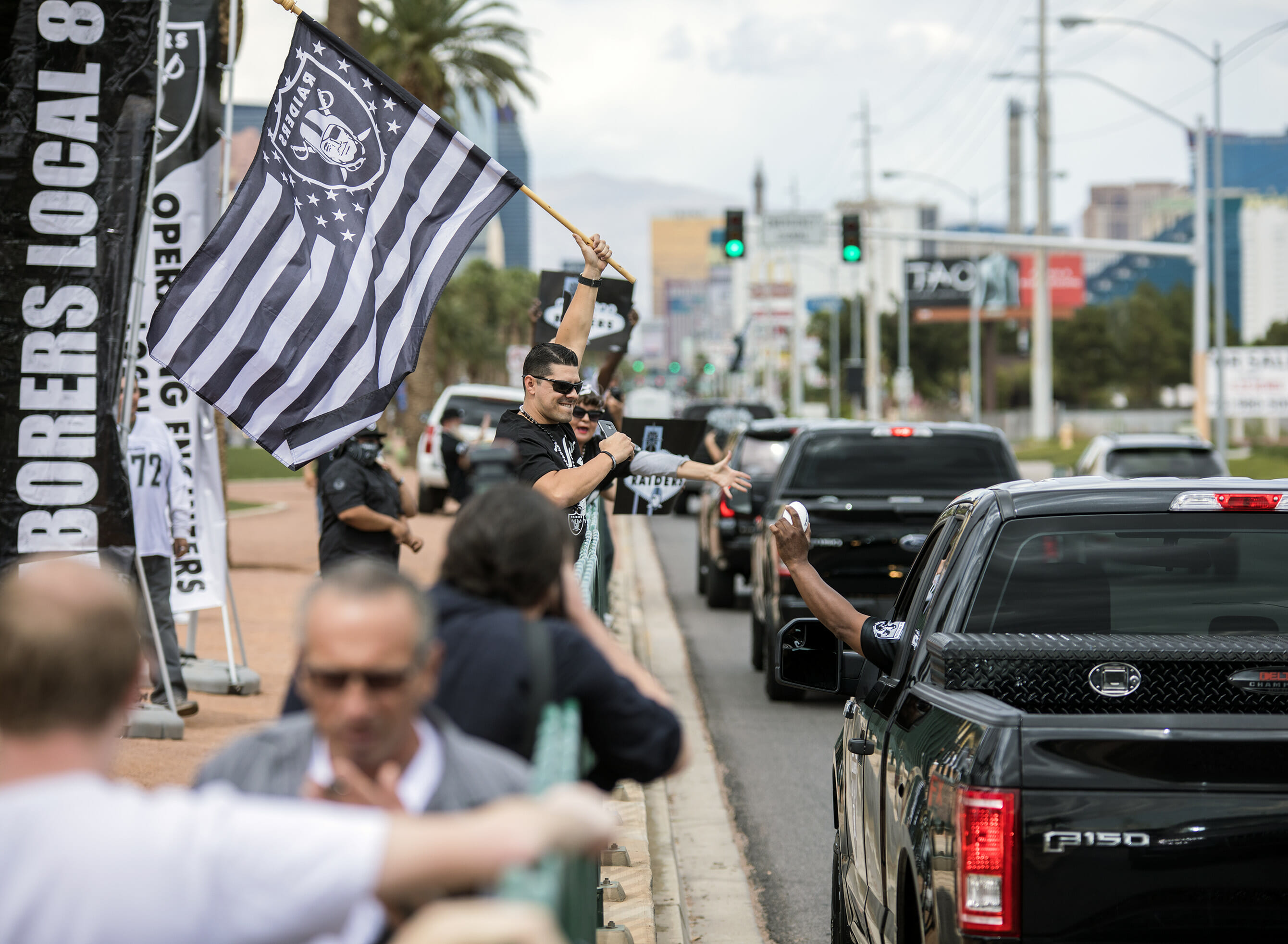 In a major victory for NV Energy, the electric utility has filed a proposed contract with utility regulators to provide a new, reduced-rate pricing system for the Raiders’ stadium and team facilities, reversing earlier plans for the football team to operate independently of the state’s largest electric utility.

In a pair of filings made last week with the Public Utilities Commission, NV Energy laid out a proposed contract and new pricing structure with the under-construction Allegiant Stadium, plus Raiders administrative and practice facilities, that would commit the team to a discounted, long-term energy arrangement with the utility, based on recently proposed solar and battery storage generation projects. Notably, the proposed pricing structure would also be available to the handful of businesses that have won PUC approval to leave the utility but are not yet receiving electric service from another provider.

Although the proposed contract and pricing system — dubbed “MPE,” for “Market Price Energy tariff” — still require PUC approval before moving forward, the filings pull back the curtain on NV Energy’s attempts to prevent an exodus from the utility of the Raiders and other large, under-construction projects.

The Raiders initially filed to leave NV Energy as a customer and instead power the team’s $1.9 billion stadium with electricity procured through an alternative supplier in September 2018 — following in the footsteps of several large Nevada businesses, including MGM Resorts, Wynn Resorts and others who filed and received permission to depart the utility as a full-service customer.

“NV Energy is honored to be the energy supplier for the Raiders and their new home at Allegiant Stadium,” utility spokeswoman Jennifer Schuricht said in an email. “The company filed with the Public Utilities Commission of Nevada the energy supply agreement as well as a new tariff that would allow us to provide new service options to new companies, like the Raiders, that are locating in Nevada.”

Those companies and more than a dozen others had used a portion of state law, often referred to as “704B” after its chapter in the Nevada Revised Statutes, to depart the utility and purchase power from other providers, but only after filing an application with utility regulators and usually paying a seven-figure “impact fee” to minimize the effect on other customers of NV Energy. Nevada lawmakers substantially overhauled the 704B process during the 2019 Legislature, but exempted more than a dozen companies with pending applications from having to follow the new, more complex system for departing the utility.

The Raiders won approval from the Public Utilities Commission to contract with an outside electric provider in late January, but the team — through an affiliated business — had filed paperwork in May requesting delays in compliance requirements, hinting that the team was reconsidering leaving the utility. The stadium is expected to be completed by July 31, 2020.

The contract, as written and submitted to the Public Utilities Commission, would provide “market-based” electric rates to the Raiders’ stadium and practice facility in Henderson for a period of 25 years, depending on whether the commission approves the pending tariff structure and other pending power purchase agreements.

The proposed “MPE” pricing structure works like this: NV Energy would offer two “energy supply” periods, the first in place until proposed renewable power purchase agreements would be approved and constructed (estimated for the late third or early fourth quarter of 2023).

In the short term, the utility would provide electricity either from energy procured from the wholesale market and “based upon market index pricing” or from excess capacity from the utility’s current generation fleet, with the utility promising to procure and retire “Green-e Credits” in an amount equal to the Raiders’ overall electric consumption (Green-e is an environmental standards service that verifies clean energy sales).

This so-called short-term supply plan also includes a “best-price guarantee” for transmission costs, in essence a cost comparison between this proposed plan and the costs of the utility’s distribution-only customers, with contractual language allowing the team to receive credits and the chance to reassess rates if their transmission costs are higher than distribution-only costs.

But once the renewable energy generating facilities are constructed, the “MPE” pricing structure transitions into a fixed, flat per-megawatt energy cost (the price is redacted in documents filed with the PUC).

“The fixed price is calculated by modeling the forecasted electric consumption of the Raiders Facilities overlaid upon prices the Company will pay under power purchase agreements for renewable solar and collocated battery energy storage facilities recently executed and proposed for Commission approval by (NV Energy),” the company wrote in the filing.

The flat price in the long-term energy supply plan also includes the cost of natural gas transportation and for the cost of providing portfolio credits — an accounting term typically used to measure compliance with a Renewable Portfolio Standard — to account for “100 percent of the Raiders Facilities electric consumption.”

Both the short and long term energy supply plans pluck out surcharges that appear on most power bills, including rates for renewable energy programs, economic development, some public programs, the Base Tariff General Rate (surcharges to cover utility costs) and the Base Tariff Energy Rate (cost of fuel or purchased electricity).

In an attached white paper, the utility stated that the discounted electric prices for the Raiders and other applicable customers would benefit from the arrangement by providing “more stable planning assumptions,” and that it would build upon “Nevada’s continued leadership position in renewable energy, consistent with legislative policy and economic development objectives.”

“These resources serve as the foundation of a generation portfolio which provides for affordable and predictable customer bills, and shields customers from fuel and market volatility for decades into the future,” the utility wrote in the filing.

The benefits section also references a heavily-redacted “customer margin benefit,” included in the pricing for the short and long-term energy supply periods. Although details of this benefit are redacted, the utility states it will share this amount with other customers as part of a 50-50 split.

The “MPE” pricing structure is only available to companies with more than one megawatt of annual load, and who have won approval from the PUC to depart the utility without having been assessed an impact fee — or who win direct approval from the commission to take electric service through the new pricing system. The program isn’t available to customers who receive fully bundled electric service or are being served by an alternative electric provider.

As part of the contract, NV Energy agrees to “not pursue, recommend, support or advocate” before the commission any “impact fee” assessed against the Raiders for departing for normal utility service. The contract also includes provisions requiring the Raiders to remain with NV Energy as a full-service customer, with a limited ability to use “behind-the-meter” generation if it is only used by facilities that are not interconnected with the utility’s electric grid, do not reduce the organization’s electric load by more than 1 percent and “does not diminish the perception that NV Energy is the Raiders Facilities electricity provider.”

Those conditions mean that the pool of companies that could take advantage of the new system is relatively small — of the 14 entities that have filed exit applications since mid-2018, only three (hydrogen fuel plant Air Liquide, MSG Las Vegas and Fulcrum Sierra BioFuels) could presumably fit all of the requirements for the new pricing plan.

The pricing plan can be viewed in some ways as a replacement for the utility’s previously proposed alternative pricing mechanism — the Optional Pricing Program Rate (OPPR) — which it withdrew in the face of criticism from utility staff and the state’s Bureau of Consumer Protection, both of which expressed fears that it would unfairly benefit an arbitrary class of electric customers.