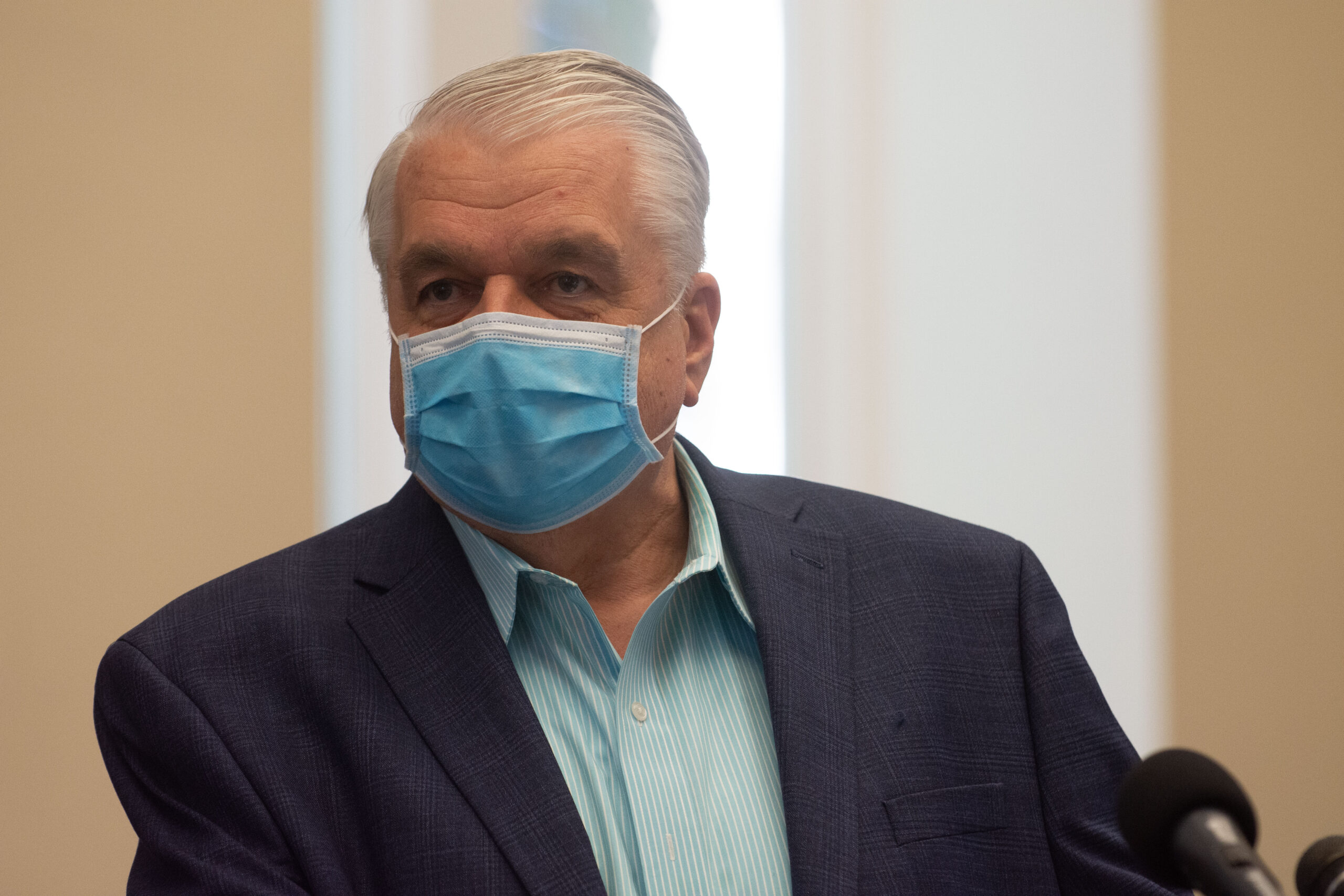 Gov. Steve Sisolak is rolling back orders to close bars in three rural counties but keeping closure orders in place in Las Vegas and Reno, while signaling a new emphasis on interventions that are narrowly tailored to noncompliant businesses and hotspot regions rather than entire industries.

At a press conference Monday evening in Carson City, the governor said some of the state’s largest counties — Clark, Washoe, Elko and Nye — would continue to have their bars and pubs closed for the foreseeable future, while those in rural Lander, Lyon and Humboldt counties would be allowed to re-open effective immediately. He also expressed second thoughts about shutting down bars wholesale.

“In hindsight, I don't know if that was the fairest way to do it, because I had a lot of bars that I’m being told we're extremely proactive and extremely effective in terms of mitigating and taking the appropriate protocols,” he said. “Others just kind of let whatever happened happen.”

Sisolak also said that the state was working on a new long-term planning framework for continued gradual business reopening that would overhaul the state’s response and mitigation efforts against the virus. The governor said that plan will be released next Monday.

Although the state had in previous months laid out broad guidelines for easing up restrictions, Nevada has remained in “Phase 2” over the past two months as the number of positive cases, hospitalizations and deaths associated with COVID-19 has steadily increased.

But Sisolak said that the updated plan released next week would have updated and improved criteria on reopening with the goal of bringing more predictability. He said the state would be moving away from the “phase” system as it adjusts to the “new normal.”

“While phases made sense at the time, we’ve got to remain flexible and responsive to what we’re seeing now,” he said.

Sisolak said the new mitigation plan would have updated criteria to more closely follow health trends and minimize day-to-day fluctuations in data, and stressed that he wanted more “predictability” and advanced notice for affected people and businesses.

He also said that businesses that repeatedly fail to follow health and safety guidelines could be closed, and that his office would be reaching out to municipal governments that have failed to adequately respond to the virus. He said the state wanted to be more targeted in its approach to compliance with health and safety standards, including a focus on businesses or ZIP codes “that have shown the need for additional assistance in intervention to stop the spread of this deadly virus.”

“I'm not sending in ambassadors, and I'm not sending in training professionals on how to wear a mask,” he said in an apparent reference to the City of Las Vegas, which announced last week it would be sending ambassadors to educate businesses about the directive but not enforce it. “I think they know that by this time. And I expect them to comply, to help us out here. We're in this together. If I've got one municipality that's not enforcing these laws, everybody suffers.”

Sisolak also expressed some frustration with groups holding protests against mask requirements — calling it “ridiculous” — and made a thinly veiled reference to Las Vegas City Councilwoman Michele Fiore, who earlier this month posted a photo of herself on Twitter wearing a pink lace “mask”.

“This isn't a joke,” he said. “If somebody’s wearing a doily on their face and says that it’s a mask, or another city councilperson says ‘I don't want them coming into my area, to mom and pop businesses and closing anybody down.’ Well, they know what the rules are, and they need to be treated the same way as everybody else.”

Caleb Cage, the statewide COVID-19 response director, said that the mask directive and other directives — as well as increased business compliance — was likely having the intended effect.

“Based on the best analysis from the best minds in the state that are looking at these things on a daily basis, I absolutely believe that the mask directive and the subsequent directives have made the impact that we're seeing right now,” he said during the press conference.

The initial bar closures earlier this month included seven of the state’s 17 counties — Clark, Washoe, Elko, Humboldt, Lander, Lyon and Nye — that were deemed to be at risk of “Elevated Disease Transmission.” Bars, pubs, taverns, distilleries, breweries, and wineries that don’t serve food were included.

As part of the plan, which was put in place at midnight on July 10, counties can be forced to comply with the additional restrictions if they show negative trends on two of three criteria established and tracked by the state, including the average number of tests per day, the rate of new infections and the test positivity rate.

Counties can move off of the restrictions if they show positive trends on two of the three criteria set by the state, as well as submitting a reopening plan that “includes mitigation initiatives and compliance plans to the Department of Health and Human Services for approval to reopen.”

Sisolak also said he planned for a second special session of the Nevada Legislature on various policy topics including criminal justice, worker protection and business liability protections to begin on Thursday, but said that the date was still in flux.

On Friday, the U.S. Supreme Court rejected a legal challenge by a Lyon County church seeking to overturn the state’s limit of 50 or fewer people during worship services.

While the court upheld Nevada’s worship service attendance limits, conservative justices on the court slammed the state and Sisolak for setting caps on church services while casinos and other large businesses were allowed to operate with up to 50 percent capacity. Justice Neal Gorsuch wrote that “there is no world in which the Constitution permits Nevada to favor Caesars Palace over Calvary Chapel.”

Sisolak said he was glad the nation’s highest court agreed with the state’s directive limiting attendance at worship services, while citing the recent case of a Catholic priest in Las Vegas testing positive for the coronavirus earlier this month.

“You know I want to have faith institutions have more flexibility, but until we get control on this virus there's nothing we can do,” he said.

Sisolak declined to weigh in on the current debate over whether schools should reopen in the fall, saying he wanted to give individual school districts the flexibility to make their own decisions. But he said the state was working to obtain more personal protective equipment and testing capacity for those districts that decide to re-start in-person instruction later this year.

While Republican Secretary of State Barbara Cegavske has said she wants to return to a largely in-person general election in November, Sisolak avoided committing to an alternative, such as requiring mail-in ballots be sent to all voters. He said the issue would be addressed in a legislative special session.

“It's very important to me that every citizen in the state of Nevada is allowed the opportunity to vote in a safe, effective manner, that they don't have to be in line till 2, 3, 4 o'clock in the morning to cast their ballot,” he said. “I don't know what we'll be experiencing in October, November, in terms of this virus. But I certainly want the ability for all citizens to be able to vote and know that they don't have to decide between exposing themselves to COVID and casting a ballot.”

Asked about the fact that more than two-thirds of approximately 100 Nevada inmates being held in a private prison in Arizona have tested positive for COVID-19, Sisolak said “we're doing everything we can to make sure that they get the care that they need, and right now I think we're okay but we're continuing to monitor that situation.”

But he indicated it would not necessarily change anything about how long they will stay in Arizona.

“As for right now, I don't want to bring 70 positive patients back to Nevada until they're been tested and they've been proved to be negative,” he said.

The ACLU of Nevada renewed its call today for more transparency about case counts and additional protective measures for inmates as the illness has spread in several detention centers. Sisolak noted that state-run prisons had a low rate of positive tests when compared with prisons elsewhere in the country, and that the jails are the purview of the counties.

“I assume that they're taking action as it relates to the folks that are incarcerated,” he said.