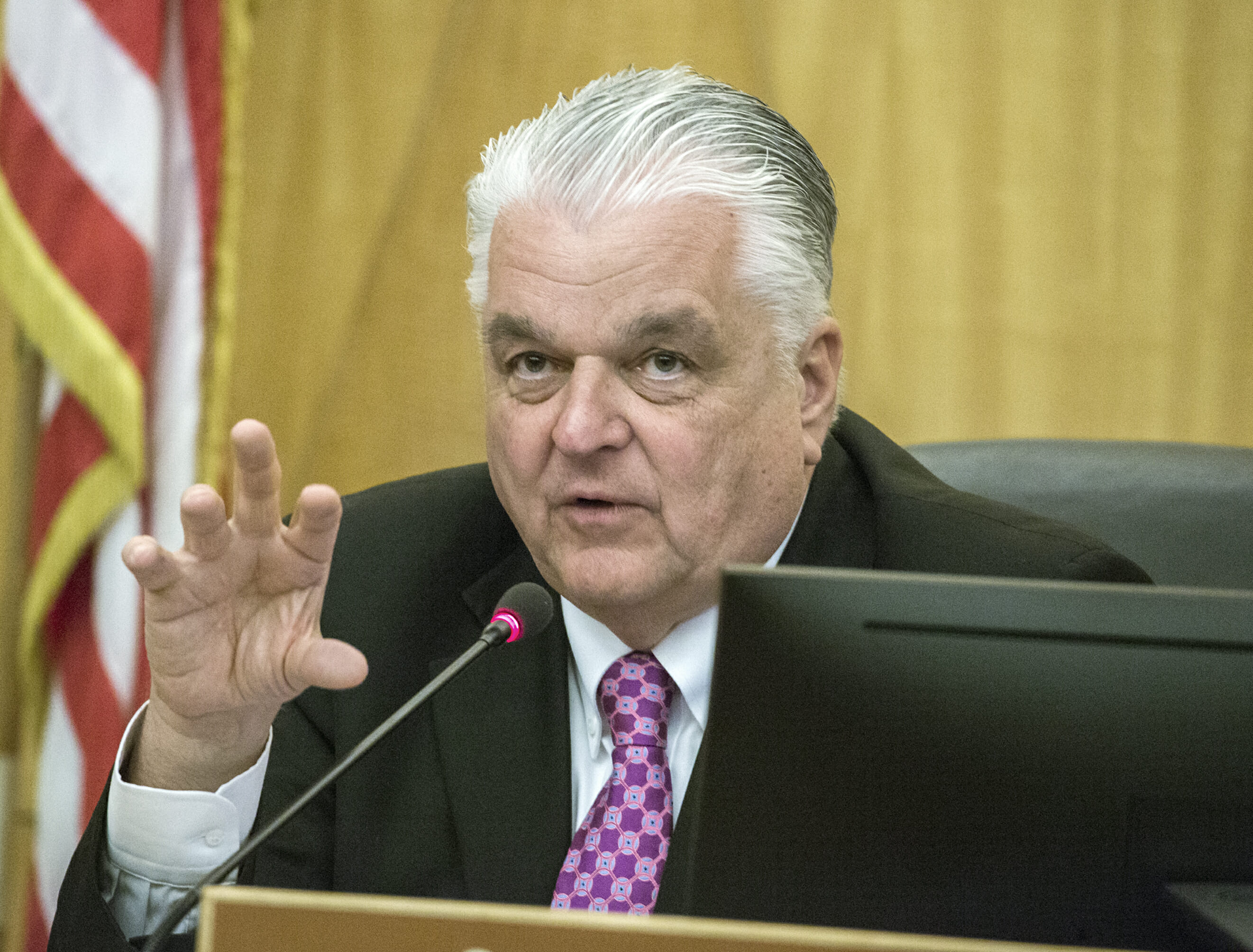 Democratic gubernatorial candidate Steve Sisolak unveiled a nine-point plan for improving the state’s K-12 system on Monday — the same day he convened a group of teachers and parents to discuss education issues plaguing the state.

His education blueprint relies largely on shifting two revenue streams — a room-tax increase enacted by Initiative Petition No. 1 (IP1) in 2009 and a retail tax on recreational marijuana — which were intended for education but wound up going elsewhere. Redirecting those funds back to education, he said, could fulfill certain aspects of his education platform, including reducing class sizes and increasing pay for educators.

Not all the marijuana tax revenue went to the rainy day fund, though. After the Department of Taxation covers administrative costs, the remaining money from a 15 percent excise tax on wholesale sales goes toward the Distributive School Account (DSA), the main funding pot for K-12 education. Some money generated from marijuana-related licensing and application fees also winds up in the DSA. The excise tax revenue was put into the rainy day fund during an endgame compromise at the end of the 2017 legislative session.

Frustration regarding the marijuana and room taxes has increased recently within education circles. Fund Our Future Nevada, a new coalition dedicated to fighting for better K-12 funding, has called for those taxes to be put back toward education as originally intended. The state has used the IP1 room taxes to fill budget holes, citing the ongoing recovery from the recession.

Although Sisolak’s education plan mentions those two revenue streams by name, he said he is open to other funding ideas as well.

“Everything is on the table except for one thing and that’s doing nothing and the status quo, because it’s not working,” he said.

Like others in the education arena, Sisolak also said he wants to “modernize” the funding formula for the state’s public schools. The Nevada Plan, created in 1967, has been roundly criticized for being out of date and not taking into account the state’s changing demographics or rising costs, such as health care.

Sisolak said he doesn’t want to harm any schools by changing the formula, so he’d look into doing a “freeze” — or holding districts at current funding levels — but then distribute any new money based on modern programs and needs. He hasn’t identified a new formula but wants to gather education representatives from all parts of the state to participate in that conversation and work toward a solution.

“It shouldn’t be handed out basically under the same formula that’s existed for 50 years that doesn’t work,” he said.

The funding formula isn’t the only money-centric part of his plan, though. Sisolak also proposed allowing school districts to create rainy day funds and bolstering protections to prevent education funding cuts. The Democratic candidate said the Legislature should be required to obtain a two-thirds supermajority for any budget cuts to education revenue streams or programs. His rationale: Education cuts should be just as difficult to achieve as increasing funding, which requires a supermajority.

“You shouldn’t be able to cut programs that were implemented with the idea of helping our education system and helping our students with just a regular majority,” he said. “It should have to be more persuasive where you get a two-thirds majority. And I don’t think you’ll be able to do it, which is a good thing.”

Other points of his plan include allowing businesses and community organizations to “adopt a school” and banning the diversion of public education funds to private schools — a vague reference to controversial Education Savings Accounts, which didn’t end up receiving funding last legislative session. He also wants to overhaul the makeup of school boards. The latter idea isn’t new, but it has been met with resistance from the elected members of school boards.

Sisolak’s proposed restructuring would create boards that have some locally elected members, locally-appointed leaders and state-appointed experts. The new combination of members, he said, would inject more expertise on subject matters like finance and land management into a body that’s tasked with shepherding complex systems.

Deanna Wright, the president of the Clark County School Board of Trustees, said that arrangement would take away the voice of the people. She said the Clark County trustees get more than 36 hours of professional development each year, which helps equip them with the knowledge needed to govern.

Wright also lashed back at the insinuation that trustees haven’t been able to fix some of the chronic problems facing the large, urban school district. Instead, she placed some of the blame back on state lawmakers.

“It’s very complex,” she said. “They haven’t been able to figure out the Nevada Plan and figure out education funding.”

Some of the first people to examine Sisolak’s plan were a number of teachers and parents who participated in a roundtable discussion with him Monday afternoon. His campaign team worked with the Clark County Education Association, which endorsed Sisolak, to select the participants.

They offered their observations and input, talking at length about large class sizes, school safety, low parental involvement and issues created by student mobility — the term used to describe children who move and change schools.

“My kids moved around a lot,” said Jennifer Manning, a math teacher at Eldorado High School. “In middle school, they went to six different middle schools, and that’s just one example of one kid.”

The anecdote drew a “wow” from Sisolak as he listened to the teacher describe how easy it is for students to fall behind academically when changing schools.

Later in the wide-ranging conversation, a librarian from Liberty High School alerted Sisolak to what she calls a “quiet crisis” — the elimination of librarians or certified librarian teachers from schools. Susan Slykerman said 69 schools in Clark County either don’t have a library or a librarian.

Slykerman said she attended the roundtable discussion to lobby for placing a librarian in every school. But she also walked away satisfied with Sisolak’s overall education platform, which she said included some “dynamic points.”

For instance, Slykerman said she agrees with his suggestion regarding the school board.

“You need to have a variation of people on the board who come from different walks of life but also are familiar with education,” she said.

Sisolak described the discussion as “enlightening” and said he intends to have similar conversations going forward. Several educators who attended hope he keeps that promise.

“It’s really nice when the politician goes to the source of where the issues and concerns really are,” Manning said.

Earlier this year, Sisolak announced he would forgo a salary as governor until the state improves its education system, which consistently lands at or near the bottom of national rankings. He’ll face off against Chris Giunchigliani, his commission peer who’s also a former teacher, in the Democratic primary in June.