Sisolak orders statewide closure of nonessential businesses, including casinos, following in footsteps of other states 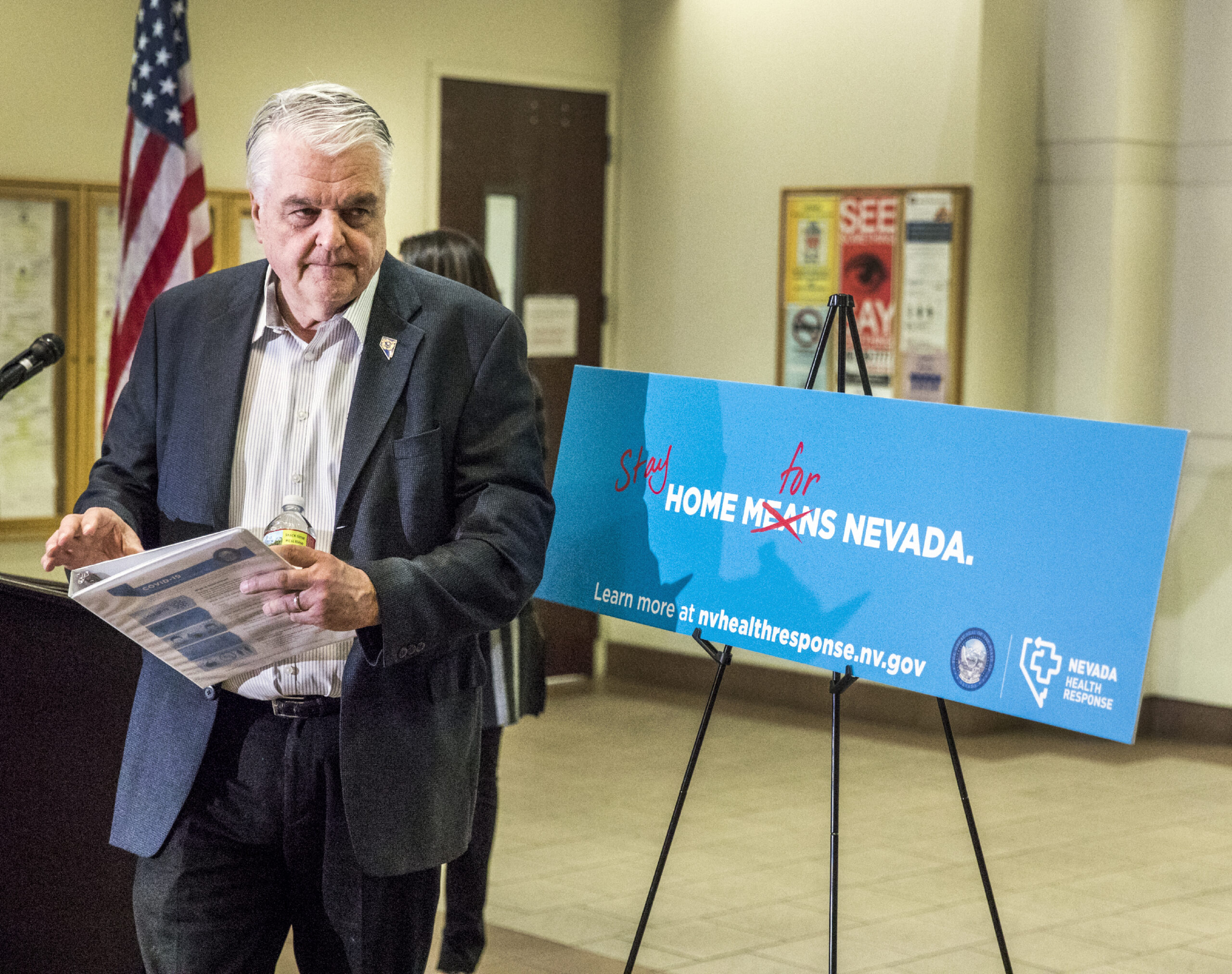 Gov. Steve Sisolak on Tuesday ordered a sweeping shutdown of nonessential businesses, including casinos and retail stores, for 30 days, a move that would have been unthinkable weeks ago before the novel coronavirus wreaked its havoc around the world.

And, for the first time in the state’s history since it legalizing gambling in 1931, all gaming operations — including gaming machines, devices, table games and any other equipment related to gaming activity — will be required to cease by midnight. All other nonessential businesses must shutter their operations by noon Wednesday.

According to a tweet from Reno City Councilman Devon Reese detailing the anticipated closures, professional offices, including those of lawyers, doctors, accounts and realtors, will also be allowed to remain open so long as desks are arranged to ensure maximum safety to workers.

The governor, at times forceful and emotional, pleaded with Nevadans to place saving lives above their normal professional or recreational activities, warning against sleepovers, playdates, theatre outings or athletic events. During a press conference, he stood in front of a sign that said “Stay home for Nevada” over the state’s slogan “Home means Nevada,” with the “stay” added and “means” crossed out.

“We absolutely must take this step for every Nevadan’s health and safety,” he said. “Please. Please take this seriously. Lives are at stake, and each day passing, this pandemic is growing. Please stay home for Nevada.”

Sisolak did not specify exactly how the state would enforce the closures, saying instead that he believed Nevadans would “understand how serious this is” and that they would heed the advice of medical professionals both in the U.S. and abroad.

The governor said that he spoke with the chief medical officers of all of Nevada’s hospitals in reaching his decision and was advised that a 30-day cessation of all non-essential business was the best course of action to stem the tide of the virus. Public health experts around the world have been cautioning that placing stringent restrictions on daily life is the only way to slow the spread of the disease and give hospitals a fighting chance to treat those patients who fall most seriously ill.

A total of 55 people in the state have tested positive for COVID-19, with one death. Nationwide, the number of confirmed cases is more than 5,700, though the total number is likely higher due to a lack of widespread testing.

“My ultimate goal here is to come together as Nevadans to save life. That requires aggressive strategies aimed at mitigating community spread. Medical professionals have made it abundantly clear that there is no treatment,” Sisolak said. “While the vaccine is being developed, we don't have time to waste. At this time we must act aggressively and decisively to protect ourselves, our families in our community.”

On Tuesday, the Nevada Gaming Control Board issued a 7-page policy memorandum with instructions and an official procedure for licensed gaming operators to temporarily close. The board asked that any licensee that is required to temporarily close give the board at least 48 hours notice, and transmit a temporary closure plan to gaming regulators within 24 hours of closing.

Sisolak didn’t gloss over the economic fallout that will follow this unprecedented shutdown.

“We know that more will need to be done when the coronavirus pandemic has passed to get our economy back on its feet and people traveling again,” he said. “In the meantime, I hope Congress will support direct cash payments to people of all walks of life, so that families can keep putting food on the table, paying their rent and keeping their lives together.”

But he called on local businesses that remain open to hire laid-off workers in roles such as delivery drivers, call-center attendants or grocery employees. The governor also encouraged those who have lost their jobs to file for unemployment online with the Nevada Department of Employment, Training and Rehabilitation.

The governor did not address the possibility that gaming companies would seek some form of a government bailout, not unlike those being sought by the airline and restaurant industries nationally.

Sisolak additionally urged people to limit their attendance at usual gatherings, such as weddings and funerals. He urged people to postpone wedding celebrations to a time when the risk of coronavirus is low or limited and asked funerals to be held outside, where there is less potential for exposure to a virus than in a confined space.

He added that he would not tell places of worship that they should close, though he strongly encouraged faith leaders to serve their congregations without bringing them together in person.

Sisolak also issued a strong rebuke for anyone not grasping the magnitude of the health crisis.

“As governor of the state of Nevada, it is my responsibility to protect the health and well-being of every person in the state,” he said. “And this is serious. If somebody doesn't understand the seriousness of this, turn on the news and watch it for a little bit.”

As of Tuesday morning, governors in at least twelve states — Florida, North Carolina, New York, New Jersey, Connecticut, California, Ohio, Illinois, Massachusetts, Michigan, Pennsylvania and Washington — have ordered the closure of bars, restaurants and wineries in their states to stem the spread of the virus.

It follows nationwide lockdowns across Europe, including France, Spain and Italy — so far the countries hardest hit by the virus outside China.

Updated 3/17/20 at 7:13 p.m. to include additional details from Gov. Steve Sisolak's press conference.

Updated 3/17/20 at 9:32 p.m. to include an additional line from a previous version of this story pertaining to professional offices.