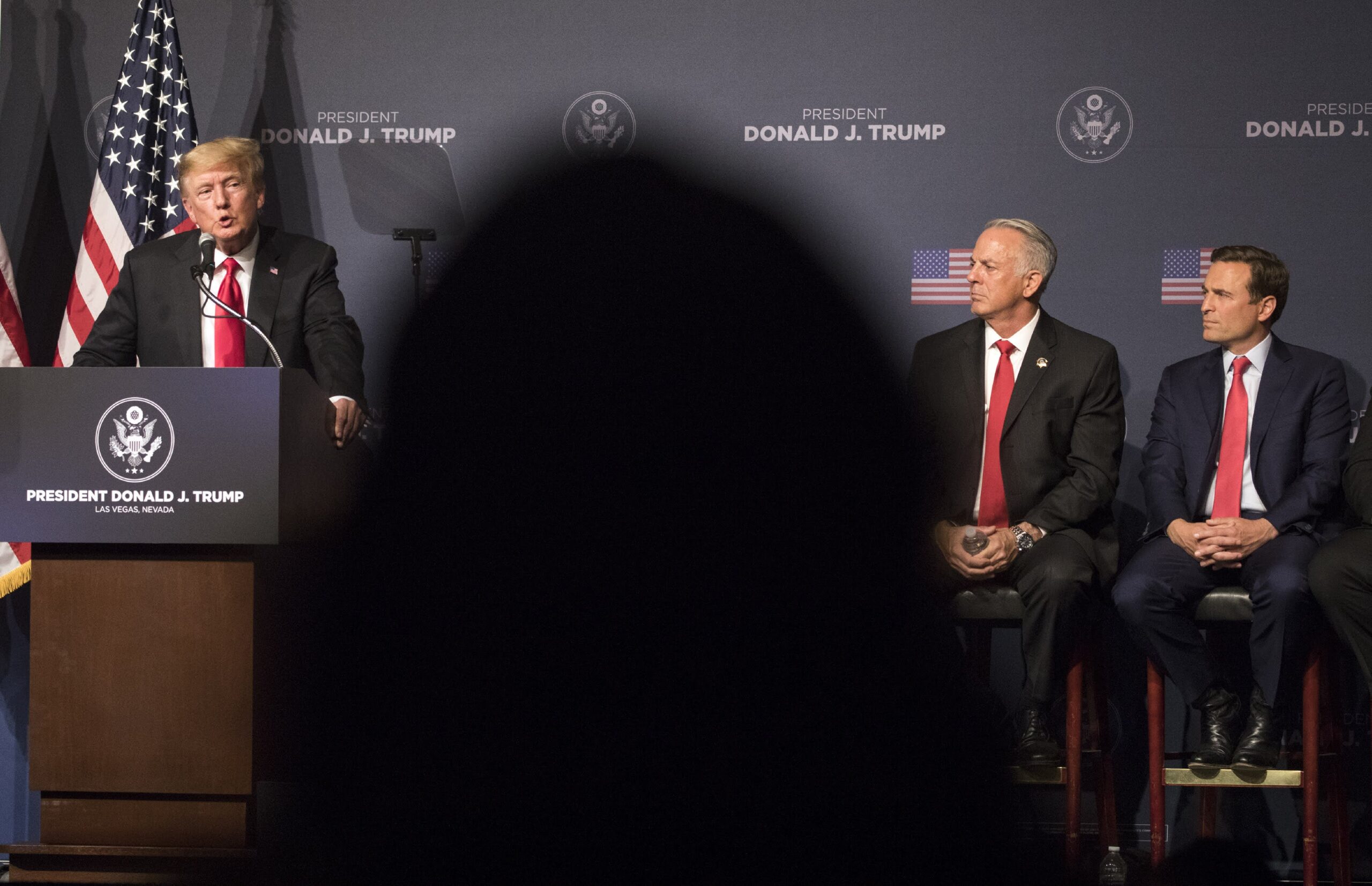 Former President Donald Trump told a Las Vegas audience on Friday that Nevada is a “cesspool of crime” and that Gov. Steve Sisolak is “letting your state go to hell” in a campaign speech focused on boosting Republican nominees for governor and Senate and promoting policies that are tougher on crime and gentler on police.

Trump’s speech at the Treasure Island resort on the Las Vegas Strip, which lasted about 45 minutes, included specific plugs of Clark County Sheriff Joe Lombardo for governor and former Attorney General Adam Laxalt for Senate. But he also shared sweeping policy goals, including suggesting the U.S. should swiftly execute drug dealers like China does, as well as put to death people who kill police officers, and human traffickers.

"Our country is a cesspool of crime. We have to give our police back their authority, their power and their prestige,” Trump said, before proposing a massive increase in the number of police officers in American cities and a vast expansion of qualified immunity, a legal doctrine that makes it harder for police to be held personally liable for actions unless they are found to be excessive.

“We need to stop conducting prosecutions of officers who make honest mistakes," Trump added. “Police officers will never be able to enforce the law if simply doing their jobs can land them in jail, take away their retirements and basically ruin their lives and the lives of their family.”

The speech came on the heels of a panel discussion featuring Lombardo and Laxalt, as well as officials in immigration enforcement and corrections, in which Lombardo criticized recent changes in Nevada criminal justice laws under a trifecta of Democratic leadership and Laxalt argued that law enforcement is “beleaguered” amid “rabid anti-law enforcement rhetoric.”

Lombardo panned criminal justice reform measures passed in the two most recent legislative sessions, alluding to provisions in AB236, a wide-ranging measure in 2019 born out of a lengthy “justice reinvestment” initiative to reduce spending on incarceration and reapply the savings to crime prevention. Among other things, it raised the monetary threshold at which a stolen item would be considered a felony, and raised the amount of drugs a person needed to possess to be charged with drug trafficking.

The bill passed with numerous Senate Republicans in support, and Lombardo has said he wouldn’t seek to repeal it, although he argued that it needed continuous evaluation.

The sheriff also pointed out that prison populations now are on par with what they were 20 years ago, even though the state has added about a million people in that time, arguing it was evidence of legislators’ lenience.

"You see the direction we're going folks, you see what the intent is? Be softer on the criminals and with no concern toward the victims,” he said.

The decline in Nevada’s prison population has been steepest in the last two years, although experts say it’s difficult to tell to what extent state laws passed in 2019 and 2021 affected it. Much of the decline comes as the pandemic altered law enforcement protocols and court processes to move people from jail to prison; dramatic prison population drops were also seen nationwide.

Laxalt centered his criticism of Democrats on the aftermath of the killing of George Floyd at the hands of a Minneapolis police officer in 2020.

"We had the most out-of-whack national media narrative that all law enforcement was systemically racist. They all needed to be scrapped,” Laxalt said. “How many Democrats that were representing this state did you see standing with law enforcement in 2020? The answer is zero … it was unforgivable.”

Laxalt, who is seeking to unseat Democratic Sen. Catherine Cortez Masto and has competed with her for the endorsement of the state’s various police unions, said he acknowledged not all law enforcement is perfect.

“But we knew this one was not bad. And we knew law enforcement in the state of Nevada was actually, all across the board, was really strong law enforcement,” he said.

Both Laxalt and Lombardo were endorsed by Trump and prominently touted his backing before handily winning their primary races last month. Laxalt was co-chair of Trump’s 2020 campaign in Nevada, and Trump lauded him on Friday as “a fantastic guy with a fantastic family” who “was an exceptional attorney general.”

He called Lombardo “a true patriot” and “a tough cookie,” contrasting him with Sisolak, who he said “signed literally one weak on crime bill after another.”

“You think he cheats on elections? Oh, really?” Trump asked rhetorically about Sisolak.

Democrats were quick to mock the event, with some activists dressing in clown outfits outside the venue. At an earlier Friday roundtable in Las Vegas focused on solar energy, Democratic Sen. Jacky Rosen and Sisolak predicted Nevadans would reject Trump and his endorsed candidates in November.

“Well, you got a former president, that was a failure and … still denies January 6, campaigning for a Senate candidate that was a failure, and his sheriff was a failure as a sheriff,” Sisolak told reporters. “So I think they all fit together very well. And, you know, let them do what they’re gonna do. But, you know, we’re interested in moving Nevada forward.”

After Nevada, Trump was set to head to Anchorage, Alaska for a Saturday rally in support of candidates including congressional hopeful Sarah Palin.

Before the event, about 300 attendees cheerfully mingled in a sea of mostly red, navy and white colors while they anticipated the speech and panel. The event was considerably smaller than some of Trump’s previous rallies in the state, which drew thousands.

Jan Moody, 65, born and raised in Las Vegas, described herself as a big Trump fan and wore a sun visor with the former president’s name stitched across the front. She said she was invited to the Friday rally after working many Trump rallies across Nevada since 2020.

“The Democrats seem to have something against the police,” Moody said. “And we can’t have that.”

Despite her focus on policing, Moody was not pleased that Lombardo won the GOP nomination for governor. She said after working for the Las Vegas police department years ago, she personally disliked Lombardo and hoped that Joey Gilbert would have won because of his Christian faith and pro-police politics.

Moody also said she did not like how Lombardo handled the Oct 1 shooting that took the lives of 58 people including a police officer.

Gilbert, a Reno attorney, has refused to concede the primary in spite of unofficial results showing he lost to Lombardo by about 26,000 votes and the results of a recount he requested showing virtually no change in the count.

Attendee Mike Parish, a resident of Nevada for 30 years, echoed the sentiment of some speakers at the event that it was time to “take back” the state. During an interview, he said that Republicans have a chance to “right this ship” in regards to American politics and the rule of law.

“I'm comfortable with where Nevada was during the 1980s into the 1990s,” Parish said. “And I'm just not happy with where it's gone over the course of the last 10 years.”

Parish said the federal government should serve a secondary role rather than primary one. He said issues like abortion should be left up to voters as a state issue and that the Supreme Court recently got it right in overturning Roe v. Wade.

Switching from Democrat to Republican as hundreds of other Nevada voters have done recently, Adam Huntington, 24, said he feels that President Joe Biden is an incompentent leader. He said Trump’s points regarding immigration, securing the border and law and order were eye opening.

He said he is against the “soft on crime policies” led by Democrats and agreed that harsher punishments should be the standard in the U.S. Huntington also mentioned that while a Democrat in 2020, he experienced racism from Democrats who hurled insults online toward the interracial relationship he has with his Republican girlfriend.

“That's the sort of hatred coming from the party that is supposed to be tolerant,” Huntington said. “That kind of hypocrisy – I just don't vibe with.”