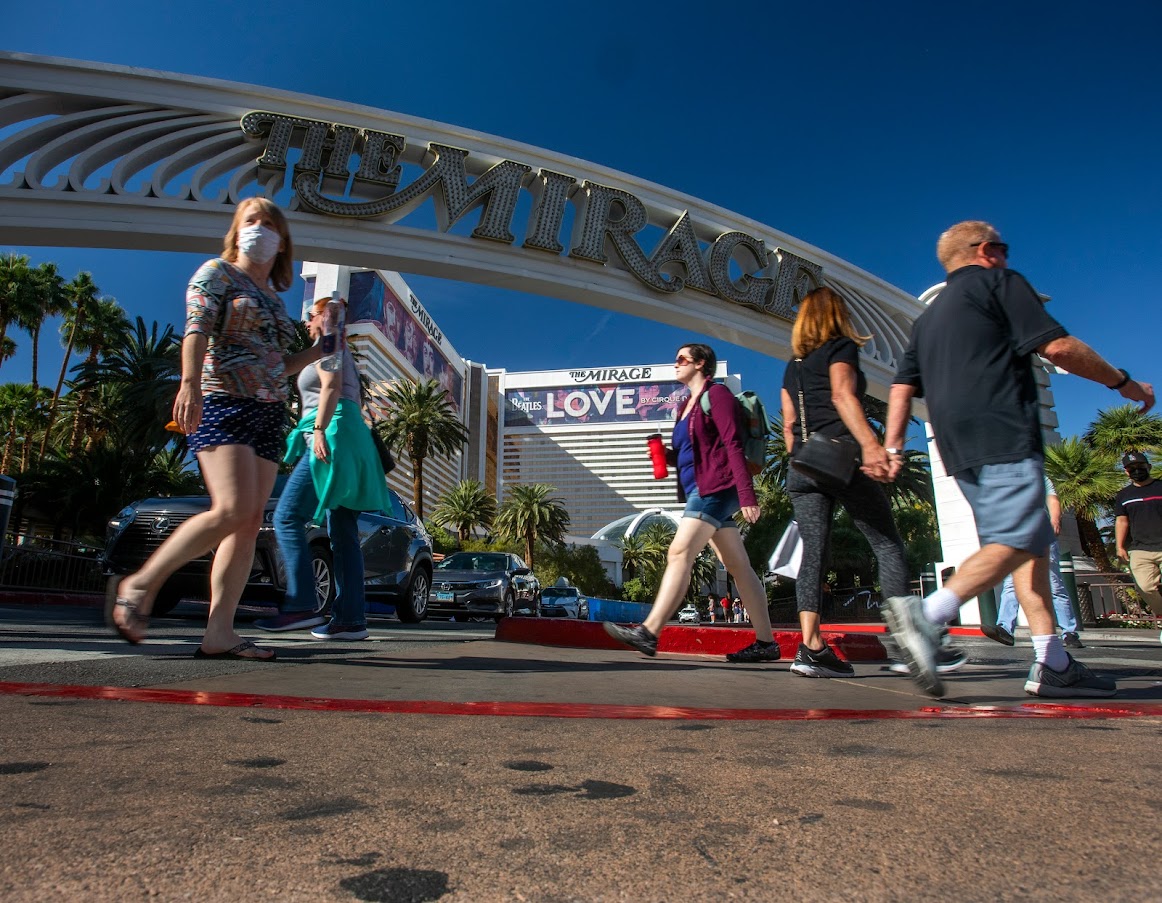 Last week, however, Caesars Entertainment and MGM Resorts International, the Strip’s two largest operators with a combined 17 properties, each said they wanted to part ways with a hotel-casino.

“Assets are not always available,” Bussmann said. “There has always been an ebb and flow to the Strip. I think we are just at the peak of one of those cycles. It’s hard to justify the cost of building a new resort with few good plots left, so it’s about trading assets with various market entrants.”

Truist Securities gaming analyst Barry Jonas noted that interest rates are low and capital markets have been accommodating toward gaming industry transactions, both in Las Vegas and regionally.

Many companies, Jonas said, want to utilize casino sale proceeds to pay down long-term debt, some of which was taken on during 2020 to help fund operations and boost balance sheets during the gaming industry’s COVID-19 closures and subsequent operating restrictions.

“Gaming REITs have enabled all time high valuations on the Strip, which has tempted sellers of both full properties and even operations to sell now,” Jonas told The Nevada Independent.

“The industry continued to move towards consolidation, and many operators, with some notable exceptions, see a Las Vegas Strip property as important for them to be seen as more than just a local or regional player,” Jonas said.

The right time to sell

The announcement that Caesars would look to sell one of its Strip hotel-casinos was the least surprising news to come out of the company’s third-quarter earnings conference call last week.

CEO Tom Reeg has said as much going back to June 2019, when Eldorado Resorts and Caesars first disclosed their $17.3 billion merger. At the time, he said nine resorts on or near the Strip was too much exposure for the combined company.

“We think this is an opportune time to execute on our strategy of a Strip asset sale,” Reeg said on Tuesday. “So you should expect us to put that in motion in the early part of 2022.”

A day later, MGM Resorts International CEO Bill Hornbuckle put operations for The Mirage on the market, telling gaming analysts and investors a transaction would allow the company “to maintain our existing Las Vegas exposure.”

That news was unexpected. MGM Resorts is central in two of the major deals pending regulatory approval, including adding the operations of The Cosmopolitan of Las Vegas to its Strip portfolio as part of a $5.68 billion sale and lease agreement that involves the gaming REIT controlled by The Blackstone Group.

Hornbuckle, who was part of the team that opened The Mirage in 1989 for Steve Wynn’s Mirage Resorts, said he was “excited for somebody to come in and make it their marquee property.”

MGM is focusing its efforts on the Strip south of Flamingo Road. With the addition of The Cosmopolitan, Hornbuckle said The Mirage became expandable as the only property it operates north of Flamingo.

“We have enough of Las Vegas,” Hornbuckle said, agreeing with Reeg on the market conditions for a sale. “We think there is an opportune time … to sell an asset in Las Vegas. (The Mirage) became for us the obvious one as we think about our portfolio.”

Bussmann said many of the regional casino operators his company consults with view Las Vegas as a desired location.

“It’s an asset that customers want as an option, not just from locations around the United States but from other spots of the world,” Bussmann said.

What will Caesars sell?

Caesars has not identified which Strip property will be sold.

Wells Fargo gaming analyst Daniel Politzer suggested Caesars could collect up to $3 billion depending on which property is sold. Macquarie Securities gaming analyst Chad Beynon said Caesars would benefit from “the scarcity value and low borrowing cost will allow for a strong asset sale price.”

Caesars sold the off-Strip Rio Resort in 2019 to a New York-based real estate group, and Caesars is still managing the hotel-casino under a lease agreement. VICI owns Harrah’s Las Vegas and Caesars Palace, which are leased to Caesars Entertainment.

“As a public company, every asset is for sale every day,” Reeg said in response to an analyst question last week. “We'd expect to sell a single property and be done, but we'll assess where we are in the market, what our balance sheet looks like afterward and how we feel about our future prospects.”

Owning a piece of the Strip

Analysts expect potential buyers for The Mirage and one of the Caesars properties include a mix of current Las Vegas operators, regional gaming companies and even tribal casino operations.

The challenge with The Mirage is that a buyer would have to negotiate a lease agreement with VICI Properties once the REIT's buyout of MGM Growth is finalized next year. The Mirage sits on 77 acres that includes Siegfried & Roy's Secret Garden and Dolphin Habitat and the Strip-front artificial volcano feature.

Penn National Gaming CEO Jay Snowden was asked about Strip acquisition opportunities on Thursday during his company’s third-quarter earnings conference call. Penn, which is selling the operations of Tropicana Las Vegas to Bally’s Corp. as part of a $360 million transaction with Gaming Leisure Properties, still owns M Resort in Henderson.

Snowden said Penn made an offer for The Cosmopolitan, calling the property “a once in a lifetime opportunity.” He said Penn, which has 41 gaming properties in 20 states, “would kick the tires if there is something out there.”

However, he said it’s not essential that Penn operate a casino on the Strip.

“I think that having representation across states throughout the U.S. is absolutely a strategic imperative for us, and we've largely accomplished that goal,” Snowden said. “If we were to find the right asset at the right location, and the right price, then of course we would be interested.”

Florida-based Seminole Gaming, which is controlled by the Seminole Indian Tribe, has been seeking a location in Las Vegas for its Hard Rock brand. The tribe owns Hard Rock Entertainment and the intellectual property rights to Hard Rock Hotel Casino Las Vegas.

Seminole Gaming CEO Jim Allen said during a media availability at the Global Gaming Expo in Las Vegas last month that the tribe wasn’t interested in Planet Hollywood. Allen wouldn’t say if he had met with anyone from Caesars.

“We recognize Las Vegas is the entertainment capital,” Allen said during a CEO keynote panel at the gaming industry tradeshow and conference. “If the opportunity comes up, yes, we would be interested.”

“It all depends on the asset and what interested parties are looking for to enhance their current portfolio but at the right price,” Bussmann said.

The first came in 2009, when he bought Treasure Island from MGM Resorts for $775 million. A year later, he told his hometown Wichita (Kansas) Eagle newspaper that he tried to buy The Mirage again because it “hooks onto my casino here. They kind of go together.”

In 2015, Ruffin said he offered MGM Resorts $1.3 billion for The Mirage, but the bid was rejected.

The Mirage never came up in discussions when Ruffin bought Circus Circus Las Vegas from MGM Resorts in November 2019 for $825 million in a “handshake agreement” with former MGM Resorts CEO Jim Murren.

Ruffin, 86, who has a net worth of $2.2 billion according to Forbes, couldn’t be reached for comment about any renewed interest in owning The Mirage.

“Never count out Phil Ruffin, especially with Mirage now on the market,” Bussmann said. “But I’m sure he would want the land as well.”

Ruffin may have answered that question back in 2015, when he said MGM Resorts turned down his offer because The Mirage was being placed into a REIT.

“We don’t have any interest in The Mirage now because we don’t pay rent,” Ruffin said.