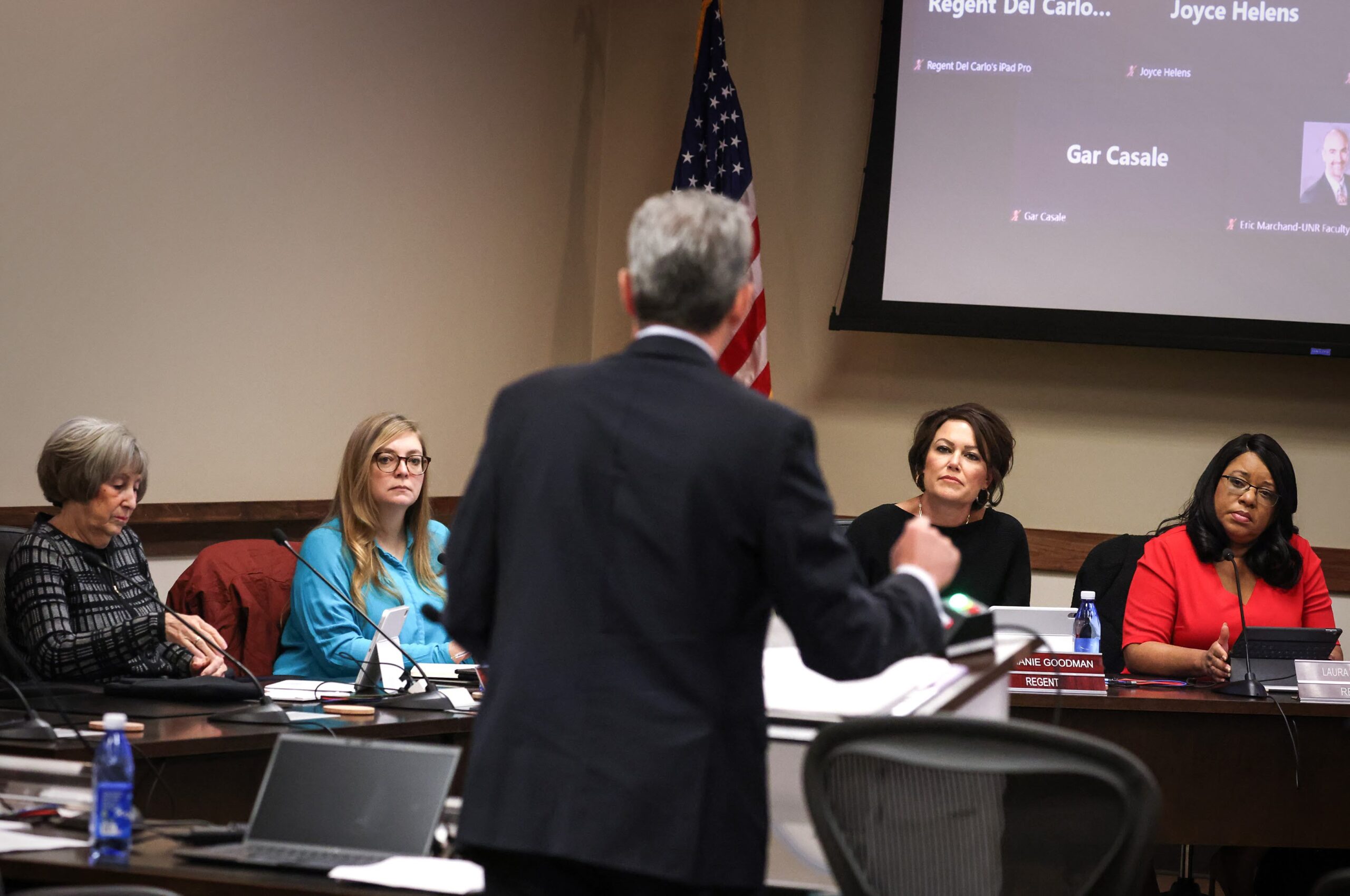 Those purchases, highlighted in three separate audits authorized by state lawmakers in 2021, include multiple instances in which individual institutions moved funds from state-funded accounts into so-called “self-supporting” accounts, or those funded by student fees, tuition and other non-state dollars. Auditors said that occurred, in part, because of “vague or insufficient” oversight from regents.

Auditors found institutions frequently moved remaining funds at the end of the fiscal year to avoid having to return the money to the state general fund as other state agencies do.

NSHE Chief Financial Officer Andrew Clinger told the Board of Regents the moves were not in direct violation of state law, but rather created a potential clash with “legislative intent.”

“Unlike other state agencies who don’t have the ability to do that, we were, I would say, maximizing the use of our state funds,” Clinger said. “And there’s nothing wrong with us doing that … and the auditors are not saying our ability to do that is wrong. What they’re saying is that this is something that the Legislature should consider from a policy standpoint.”

The audits made public last week also questioned some specific transactions, including two institutions that spent $6.7 million in “general improvement” dollars on athletics and band — transactions that auditors said required regents to tighten rules governing how such general funding ought to be spent.

In another instance, auditors flagged three capital construction projects at UNLV and UNR (out of 27 total projects) that they said should have been overseen by the state public works board but were not, in addition to roughly $200,000 worth of “inappropriate” payments to contractors.

Auditors also raised the issue of a potential conflict with the oversight of the construction of the UNLV School of Medicine’s $125 million medical education building, which was built and financed largely by a private corporation, the Nevada Health and Bioscience Corporation (NHBC), and supplemented by $25 million in state funding.

Heralded at the time as a success by the building’s private backers, former Gov. Steve Sisolak and the higher education system, auditors questioned whether state law allowed such public-private partnerships as a “procurement method.”

Clinger told regents that system lawyers believe NSHE can use such agreements, a sentiment echoed last week by NHBC CEO Maureen Schafer in an interview with The Nevada Independent.

Clinger told regents that many of the issues raised by the audits were the result of self-reporting by the institutions, which deliver financial details to his office before they are filtered to regents.

Although regents who spoke Wednesday described the recommendations as “sound,” Vice Chair Joseph Arrascada questioned the tone and characterization of potential violations in the audit summaries, which called board oversight “minimal” and the spending moves in question “inappropriate or questionable.”

“The summary of the report itself makes it as if the entire report looks horrible,” Arrascada said. “It seems that the summary was written in a way to make it publishable, to make it sound almost like a ‘gotcha.’”

Some regents described the audits as a “gift,” or characterized them as an opportunity to ask “uncomfortable” questions that might improve or expand board policy and higher education oversight. One new member, Regent Susan Brager, called the audits “amazing.”

“What’s good about this audit is everything, quite frankly,” Brager said.

In comments to the board, acting Chancellor Dale Erquiaga said the process was an opportunity for regents to more rigidly define the authority it granted to the chancellor — who is in charge of the system — and institution presidents to act on the regents’ behalf.

Those decisions are expected in the coming weeks and months in accordance with legislative deadlines tied to the audits. Erquiaga told the board he will convene three committees to review the audits’ recommendations, with each committee including at least one member from outside the higher education system.

Those committees will produce policy recommendations in tandem with the system’s finance office and chief auditor, who will present regents with recommendations at a meeting in March ahead of the legislative auditor’s first deadline for action in April. Regents will vote again on audit recommendations following a six-month mark, set to hit in early October.

A new year, a new board

Wednesday’s meeting was the first substantive one for new members of the Board of Regents, who are assuming their roles after a period of administrative tumult that has dogged the system since the start of the pandemic. Many of them staked their electoral campaigns on pledges to right the higher education ship.

Their election comes as scrutiny has increased on the board — a 13-member panel of elected officials in charge of four community colleges, one state college, two universities and a research institution. Together, they operate with a billion-dollar budget.

In 2020, a coalition of business groups, labor groups and state lawmakers pushed to remove the regents from the state Constitution through Ballot Question 1. Though that question narrowly failed, it was revived in 2021, and will be voted on by lawmakers again this year. Several of the same backers of that measure also supported AB416 in 2021, the bill which created the audits.

Now, the system gears itself for a legislative session in which the potential policy ramifications for higher education remain unknown, with the governor yet to release a budget or deliver his first State of the State address.

They replace a mix of regents, including two of the state’s longest-serving members — Jason Geddes and Mark Doubrava — who had spent a combined 28 years on the board (16 for Geddes and 12 for Doubrava), and who were both termed out at the end of 2022.

They also replaced the former chair and vice chair, Cathy McAdoo and Patrick Carter, who had drawn scrutiny during the investigation into former Chancellor Melody Rose’s hostile workplace complaint. Though the investigation into that complaint ended in Rose’s departure last spring, neither McAdoo nor Carter ran for re-election.

The last replaced regent, J.T. Moran, was the only board member to mount a re-election bid. Moran was bested by Goodman by more than 20 percentage points.

At the board’s helm are a tandem of Regents Byron Brooks and Joseph Arrascada, who have yet to signal their agenda for 2023 through the lone substantive meeting convened this year.

Brooks, however, frequently has cut a contrarian figure on the board since his election in 2020.

A Republican who ran and lost a primary bid for state Senate in 2018 before running for regent two years later, Brooks was often at the forefront of a vocal bloc of regents who opposed efforts by NSHE administrators to enact a vaccine mandate for system employees. Separately, he also opposed a similar student mandate for students, enacted by the State Board of Health.

Later, Brooks was at the center of a last-minute push in 2021 to end the employee vaccine mandate just days before it was set to take effect, amid the surprise end of the student mandate because of a technicality cited in an interim legislative committee.

During and after the investigation into the complaint from Rose, Brooks was among a bloc of regents who were highly critical of the former chancellor.

Now, Brooks takes the reins at a time of uncertainty in Carson City. Republican Gov. Joe Lombardo must contest with a near-supermajority of Democrats in control of both chambers of the Legislature.

The state’s colleges and universities are poised to push for an expansion of state funding in higher education for the first time in over a decade, buoyed by individual turnover on key legislative budget committees but wary of potential cuts  from pandemic-induced enrollment declines.

Regents are next scheduled to meet on March 9 in Las Vegas.