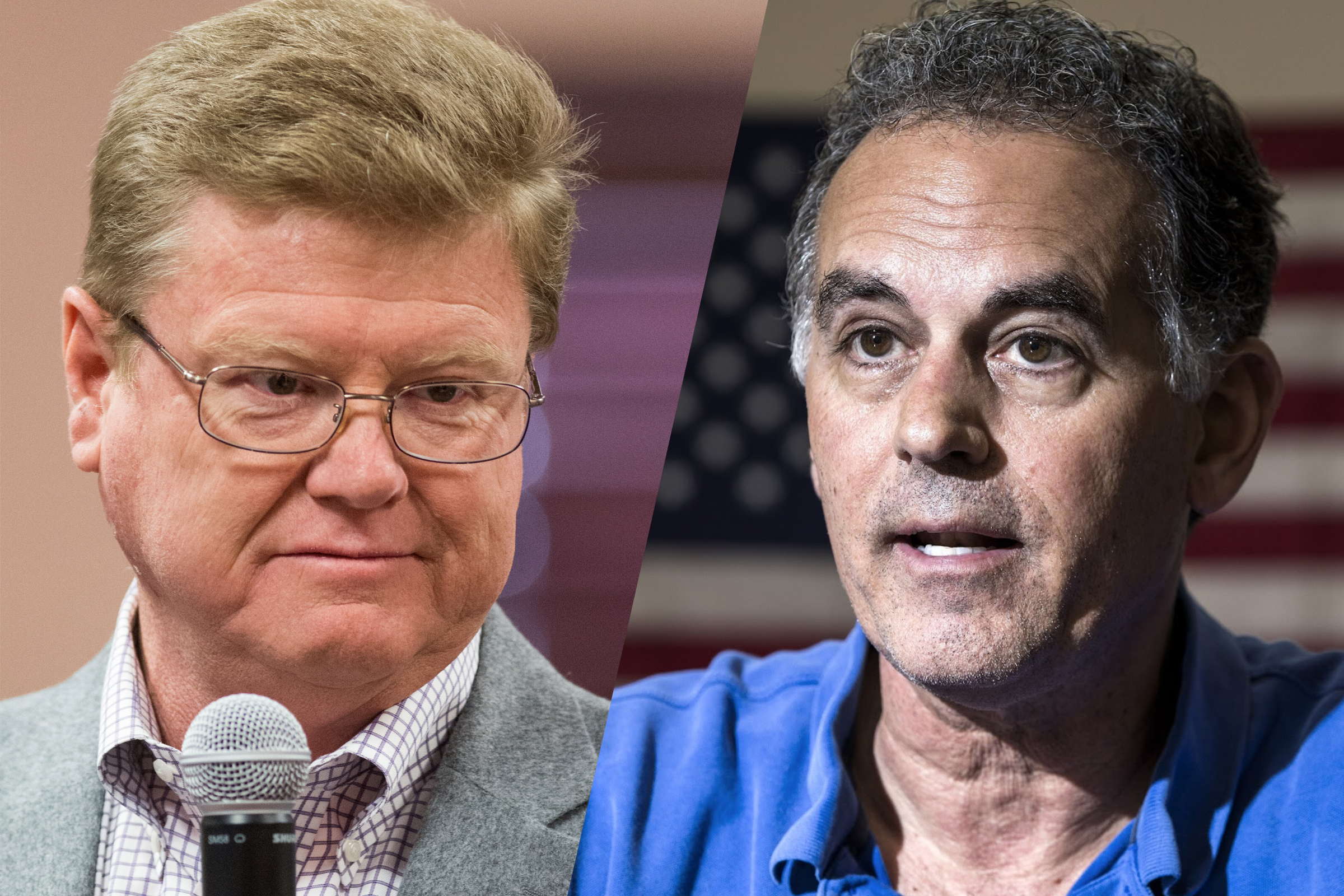 Before the candidate filing period opened, it appeared almost certain that incumbent Rep. Mark Amodei was going to have a straight shot to re-election in Northern Nevada’s safely Republican Congressional District 2.

But by the end of the filing period, three Republican candidates had jumped in to challenge Amodei in the primary, including Douglas County Commissioner Danny Tarkanian, Amodei's best-known contender. Tarkanian said his entry on the last day of the filing period in March, after weeks of alluding on Twitter to a potential run, came “because it’s crucial that the GOP retakes the House with TRUE conservative fighters.”

“Mark Amodei has been anything but America First for the past 11 years,” Tarkanian added on Twitter.

Amodei, who has held the seat since 2011, called Tarkanian “ambitious” and said he welcomed the challenge. Ahead of early voting starting on Saturday, Amodei said in a brief interview last week that he feels confident and is ready for voters to work their will.

“I feel pretty good,” Amodei said. “I can tell you this, I'm ready to hear what the voters have to say.”

He feels he’s done a good job rebutting Tarkanian’s attacks that he is not conservative enough.

“We like our approach; we like our message,” Amodei said. “I think we've been responsible in responding to the attack atmosphere that’s clearly going to present people with a choice, at least in this primary.”

Seven Democrats filed to run for District 2 this time around, including Timothy Hanifan, a former intern for late Sen. Harry Reid and UNR alumni, and educator and Native advocate Elizabeth Mercedes Krause.

The Republican primary will be between Amodei, Tarkanian and Brian Nadell, a professional poker player who previously ran for District 3.

Nadell’s website states that his experience as a poker player has “given him the skills to understand and negotiate with all kinds of people,” which has prepared him to advocate for Nevadans. He also says he’s running for Congress to “bring common sense to Washington D.C. and unite the people for the liberty” of the country.

He made a short-lived run for U.S. Senate in 2010 before successfully winning a special election in 2011 to fill a vacancy left when then-Rep. Dean Heller was appointed to former Sen. John Ensign’s seat. He’s held the seat ever since.

If re-elected, and if Republicans win a House majority, Amodei would have more seniority and could potentially chair a committee.

Tarkanian, a commercial real estate developer and the son of legendary UNLV basketball coach Jerry Tarkanian, won his current seat in the Douglas County Commission in 2020 after losing several bids for office over the past two decades. Those unsuccessful campaigns in Southern Nevada included a 2018 run for Congressional District 3 that he lost to Rep. Susie Lee by 9 points, a 1-point loss in 2016 against then-Rep. Jacky Rosen in the same district and an 8-point loss in 2012 against Rep. Steven Horsford in District 4.

The two conservatives have bumped heads and bickered about who is most qualified and appropriate for the seat. Tarkanian has criticized Amodei for his voting record in Congress, calling him not conservative enough for deep red District 2, especially for his recent vote in support of the $1.5 trillion federal omnibus spending bill.

He also criticized the use of federal bills to pass measures unrelated to one another.

“Omnibus bills, they compile everything together and they try to force you to vote on certain things you don't like and I don't agree with that,” he said in an interview with The Nevada Independent, “I think they should be based on one subject matter and your vote on that stuff, but they throw them all together … They put in these little amendments so that bills that can't pass on their own get passed, it's really not in the best interest of the country to do that.”

Amodei was originally opposed to the spending bills, but he said negotiations with the Senate improved the measures by adding a provision that prevents spending federal funds on abortions and a provision providing funding for Nevada-focused projects.

In an interview with The Nevada Independent, Amodei brushed off the criticism and pointed to a voting record that he said speaks for itself.

Amodei’s campaign has received a boost lately through key endorsements, including one from the Nevada GOP. The National Rifle Association also announced its endorsement for Amodei, giving him an ‘A’ grade, while assigning Tarkanian a question mark grade, meaning the candidate either did not answer the NRA candidate questionnaire, or has made contradictory statements or has been inconsistent.

Tarkanian told The Nevada Independent he did not receive a questionnaire from the NRA, but he has made many pro-gun statements on social media. In a tweet following a mass shooting in a supermarket in a predominantly Black neighborhood in Buffalo, New York, he said “You know what would have prevented the gunman in Buffalo? A constitutional carry law emboldening Americans’ Second Amendment right to defend themselves.”

The tweet refers to a policy of allowing people to carry guns, either concealed or in the open, without a permit.

In his television advertisements, Amodei has pushed to differentiate himself from his main opponent.

In one ad, Amodei is shown wearing a UNR jersey and leaning against a shiny pickup truck in a garage, saying he hopes voters will “stick with the home team.” It’s a subtle dig at Tarkanian’s short time living in Northern Nevada and highlights the rivalry between the two men, who are UNR and UNLV alumni, respectively

In his paid messages, Amodei also has boasted about his service in the Army, being pro-life and defending his values, saying his “opponents are spending tons of money on media ads calling [him] an awful person.”

Tarkanian’s advertisements have called for a change in leadership as “Amodei joined the Democrats’ radical agenda,” and say he has the courage to uphold America First values. He also attacked Amodei’s votes on legislation, including “to grant benefits and citizenship to illegal immigrants. He funds Planned Parenthood over $600 million per year and his reckless budget votes have caused painful inflation.”

In 2021, Amodei voted against a bill that would have provided a pathway to citizenship for DREAMers, yet in 2018 he backed “compromise” immigration legislation that would have overturned existing law preventing undocumented children from being held for more than 20 days in order to keep families together and that would have legalized DACA recipients.

Tarkanian has said that Amodei has not done enough in his time in Congress and is not conservative enough, even calling him “Nancy Pelosi with an R in front of his name” in a tweet.

He also discredits Amodei’s stated stance as pro-life for voting in favor of a federal government omnibus funding bill that preserved funding for Planned Parenthood. Amodei has defended himself, saying the funding came as part of reauthorization of the federal Violence Against Women Act, and that his choice was to either vote for it or shut the government down.

“[None of the pro-life organizations] expected you to defund and unauthorized the Violence Against Women Act in order to cut funding from Planned Parenthood,” Amodei said during an April debate with Tarkanian on Nevada Newsmakers with host Sam Shad. “Quite frankly, some days in this business, it's tough, and you have to make decisions. It's a value judgment. There was much more good in that.”

Tarkanian’s campaign website does not state his stance on abortion except for noting that he is “100 percent opposed to taxpayer funding for Planned Parenthood.”

He told The Nevada Independent in a recent interview that there should be “a uniform answer” on abortion to prevent people from going across state lines to terminate a pregnancy. But he also said abortion has become a state lawmaking issue because it's not mentioned in the Constitution and therefore is not for the federal government to regulate.

Personally, as a Catholic, Tarkanian said he believes life starts at conception, but added that he understands Nevada’s abortion protections were passed by voters in 1990 and policymakers cannot do much about it.

While Amodei has in the past been seen as a moderate voice on immigration, calling for “commonsense reforms,” he has taken a harder-line tone in the months leading up to the primary. Amodei has argued that it is “Congress’ job” to establish a system of naturalization and has criticized President Joe Biden’s handling of immigration, especially regarding reports of undocumented immigrants being released within the U.S.

Nevada has an estimated 210,000 undocumented residents as of 2016, and the highest rate of undocumented people of any state, according to a Pew Research report published in 2019.

“It has continued to present challenges for local and state officials to deal with services for people [in Nevada] … There's criminal justice, there's public assistance, there's COVID issues,” Amodei said in an interview with The Nevada Independent. “Basically with an open border for the last 14 months, all of those problems have been exacerbated, whether it's rural Nevada or metropolitan Nevada.”

During the Newsmakers debate, Tarkanian said that if Congress hasn't done its job, then Amodei is partially responsible.

Tarkanian states on his campaign website that he “will NEVER vote to give citizenship to illegal immigrants.”

Amodei has said he supports “merit-based” immigration, such as the Farm Workforce Modernization Act.

After redistricting, the Northern Nevada district was the only one in the state to maintain a GOP registration advantage — the Cook Political Report lists District 2 as “solid Republican.”

According to the secretary of state’s office, Republicans have an 11-point advantage in the district with 191,966 voters registered as Republican and nearly 135,364 Democrats.

The district has been represented by a Republican ever since it was initially created after the 1980 census, and Democrats have struggled to gain traction even when running well-funded, professional campaigns. In 2020, Patricia Ackerman won the Democratic primary, but lost against Amodei by 16 percentage points.

Nadell has not filed a fundraising summary with the Federal Election Commission.

Amodei has a significant fundraising advantage over other District 2 candidates, with almost $482,000 cash on hand at the end of the first quarter this year, after raising more than $152,000 and spending nearly $74,000 in the timeframe. He has garnered financial support from MGM Resorts International, Majority Committee PAC, the campaign of House Republican Whip Steve Scalise (R-Louisiana) and South Carolina Republican Rep. Jeff Duncan’s campaign.

Tarkanian had only two weeks to fundraise after hopping in the race at the last minute but raised nearly $132,000 before the first-quarter deadline, including maximum donations from Edward Herbst, owner of the Terrible Herbst gas station company, and five other Herbst family members. Tarkanian also loaned himself just shy of $39,000. He spent a little more than $45,000, leaving him with roughly $86,000 cash on hand.

Even if Tarkanian loses the congressional race, he will remain in his Douglas County Commission seat as the term lasts four years.

Humberto Sanchez contributed to this report.