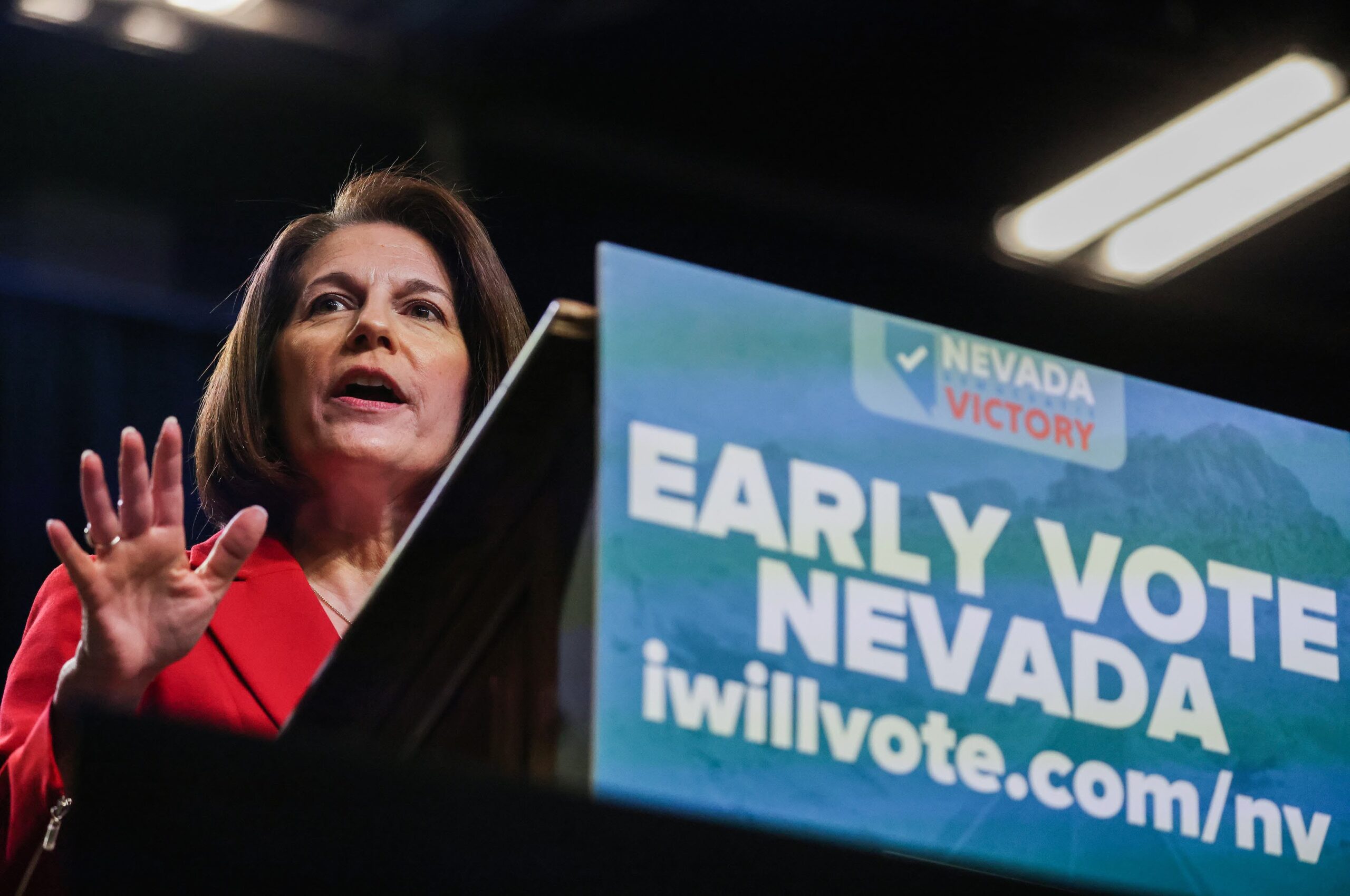 After four days of uncertainty fueled by Nevada’s lengthy vote counting process, incumbent Democrat Catherine Cortez Masto has withstood a challenge from Republican Adam Laxalt to win her second term in the U.S. Senate, securing a 50-seat majority in the upper chamber for Democrats.

One of the final tranches of ballots counted Saturday in both Clark County and later Washoe County pushed Cortez Masto to a 6,556-vote statewide lead over Laxalt, a difference of 0.7 percent.

Up to 12,000 additional ballots will be counted in Clark County next week, including more than 7,100 mail ballots still requiring “cures” and another 5,500 provisional ballots used by voters who registered on Election Day.

Many of those ballots, especially those submitted by mail, are expected to favor Cortez Masto, though both Democratic and Republican groups have sought to mobilize resources to cure ballots before the deadline.

However, not all ballots requiring cures will receive them by the deadline on Monday, and provisional ballots will only be counted once the secretary of state’s office confirms on Wednesday that voters who registered on Election Day were not already registered and did not attempt to vote twice.

Washoe County, in particular, swung to Cortez Masto after she failed to win it in 2016. It also continues a streak of success for Democratic candidates in the Reno area now stretching back both to the 2018 midterms — which saw broad success for the Democratic ticket — and the 2016 presidential election, where Hillary Clinton turned Washoe blue for the first time in decades.

The result also comes amid what appears to be a significant amount of ticket-splitting across top races, as Republican challenger Joe Lombardo defeated incumbent Democratic Gov. Steve Sisolak.

Cortez Masto’s delayed victory became clear late Saturday after the extended process of counting mail ballots submitted through the postal service and drop boxes through Election Day. Any ballots postmarked by Election Day can be collected as late as Saturday, and legal deadlines for certain procedures, such as signature curing and the counting of provisional ballots, are not until next week.

Though Laxalt had led Cortez Masto by as much as 23,000 votes on the morning following Election Day, remaining mail ballots counted in urban counties through this week have favored Cortez Masto by upwards of a 2-to-1 margin, erasing Laxalt’s lead by thousands of votes with every update of the count.

However, the long counting timeline has led some notable Republicans to, without evidence, suggest voter fraud in an echo of claims from 2020. That includes former President Donald Trump, who posted on social media Thursday that Clark County “has a corrupt voting system (be careful Adam!),” and Sen. Lindsey Graham (R-SC).

“There is no mathematical way Laxalt loses,” Graham said during a call with the National Republican Senatorial Committee (NRSC) Thursday, according to a report from Politico. “If he does, then it’s a lie.”

As late as Saturday morning, however, Laxalt did not appear to embrace the narrative of fraud, tweeting that “If [Clark County mail ballots] are GOP precincts or slightly DEM leaning then we can still win. If they continue to trend heavy DEM then she will overtake us.”

On Friday, Laxalt also took to Twitter to dispute a report from the Daily Mail that his campaign was preparing for a recount, calling it “totally and completely false.”

Laxalt did not immediately comment on the media calls of the Senate race.

The road to Election Week

Cortez Masto, a two-term attorney general, was first elected in 2016 in a bid to replace the retiring Sen. Harry Reid, long one of the most powerful electoral forces in Nevada. Opposite her in this race was Laxalt, who entered the race not only as the favored choice of former President Donald Trump, but also the wider Republican establishment, including key Senate Republicans like Minority Leader Mitch McConnell.

A historically expensive contest that drew an unprecedented amount of outside spending into Nevada television markets, the race between Cortez Masto and Laxalt was fought almost exclusively on the airwaves and on the ground, as neither campaign could agree to a televised debate for the general election.

There, with the monetary advantage — Cortez Masto cumulatively raised more than $54.5 million versus Laxalt’s $15.7 million over the course of the cycle — Cortez Masto and outside groups backing her sought to hammer Laxalt for his opposition to abortion and, later, for his links to the Trump campaign and claims of voter fraud in 2020.

She also frequently praised the passage of the Democrats’ major spending bill, the Inflation Reduction Act, and touted provisions that capped the price of insulin for Medicare recipients. However, she stopped short of campaigning with the Biden White House, which largely stayed out of the late-election rush of campaign surrogates.

Laxalt, buoyed by tens of millions in outside spending from Republican super PACs, railed against Cortez Masto as a “rubber stamp” for the Biden White House, criticizing Democrats for high inflation, rising gas prices and what he described as an “open border” immigration policy.

The pair also frequently sparred over crime and the support of local police groups, with each looking to claim support of a raft of different police unions.

On the ground, Cortez Masto also received a boost from outside groups that mobilized considerable resources to mitigate the damage to Democrats on economic issues done through a months-long tsunami of campaign ads.

That includes both the powerful Culinary Workers Union Local 226, the hospitality workers union in Las Vegas, and Somos PAC, a Latino voter mobilization group that poured millions of dollars into ads backing Cortez Masto. Both groups boasted of knocking on 1 million doors throughout the 2022 cycle, and both cited economic messages, in particular, as central to their efforts.