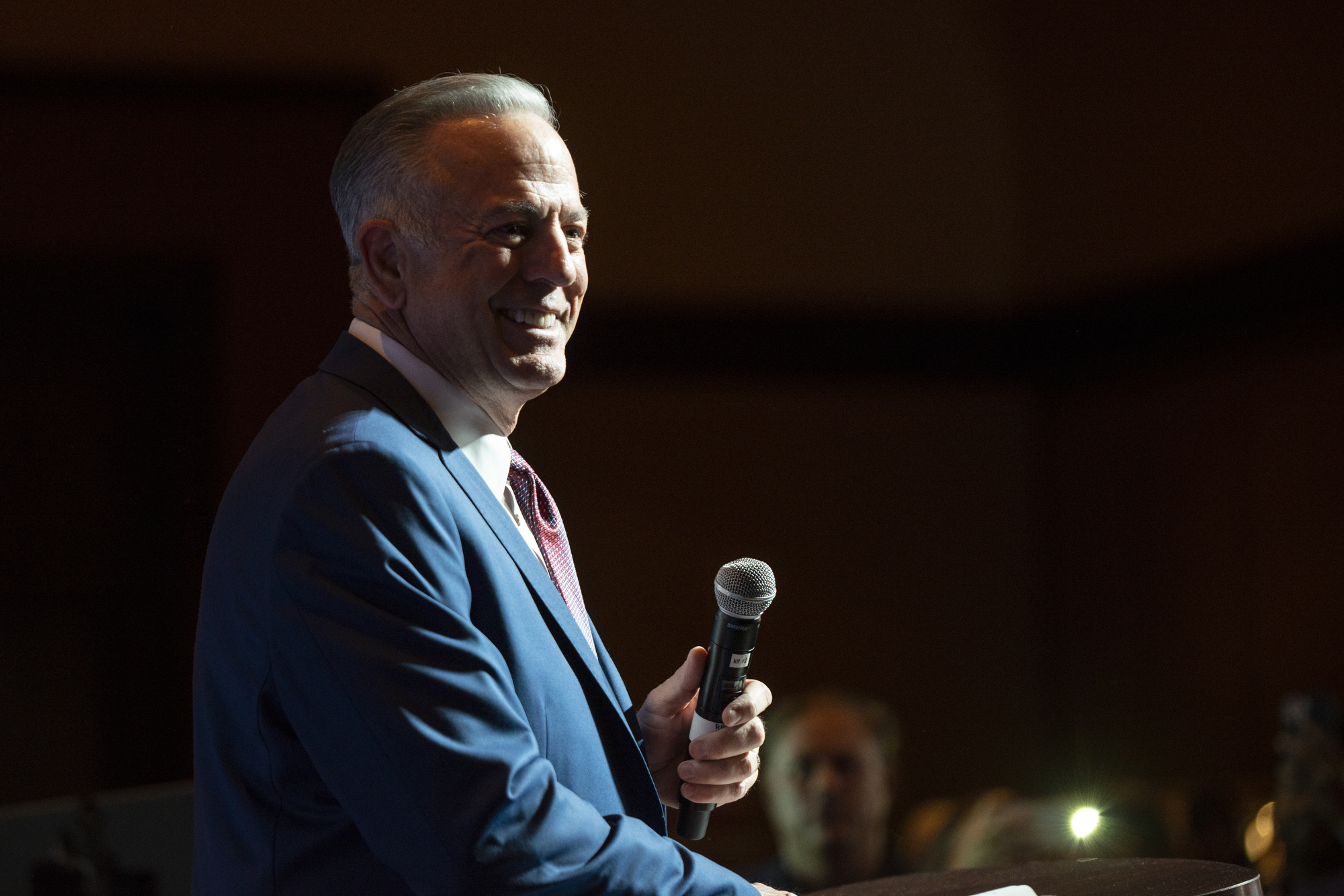 Sisolak conceded the race Friday evening, saying he believes in the state’s election system and honoring the will of the voters.

“We’ve been through a lot these last four years, from a once-in-a-century pandemic to the stresses and strains of global inflation,” he wrote in an emailed statement. “I also am proud that we made the tough decisions during COVID that helped save an estimated 30,000 Nevada lives even if those decisions sometimes had tough political ramifications.”

He concluded with this: “It has been the honor of my life to be your governor and I want to thank you for giving me this incredible opportunity to serve.”

Lombardo released his own statement later Friday evening, saying he’s “honored to have the opportunity to protect and serve our entire state as your next governor.”

He also plans to deliver his first address as governor-elect on Monday at Rancho High School in Las Vegas.

As of Friday evening, Republicans also appear likely to flip the Nevada lieutenant governor’s office and controller’s office, both of which were won by Democrats in 2018. But Republicans did not run the table — Democratic incumbents won in the state’s races for attorney general and treasurer, and the party also triumphed in the open secretary of state’s race.

The list of those projected to win statewide offices as of Friday are:

But Gov. Sisolak and other statewide Democratic candidates sought to refocus discussions on other issues, especially on reproductive rights and the role of the government in protecting access to abortions, as they hoped to tap into the Nevada electorate’s widespread support for abortion access, regardless of political affiliation.

The governor and other Democratic candidates also pushed messaging around housing and the historic investments Sisolak’s administration has made with the help of federal funding allocated to the state as part of COVID relief aid. Topics such as education, crime and immigration also rose to prominence during the election cycle.

Republican Joe Lombardo is the projected winner after having secured a roughly 2.2 point advantage, putting him ahead of Democratic Gov. Steve Sisolak by 21,200 votes. His victory would make him the second Nevada governor to assume office after serving as a county sheriff.

Though Sisolak narrowed the gap between himself and Lombardo as additional mail ballots were processed and counted after Election Day, he couldn’t muster enough votes in Democratic-leaning counties to ultimately close — and overcome — the gap.

Lombardo, whose previous political experience involved winning two county-level elections for the nonpartisan position of sheriff, has cast himself as a moderate Republican who has devoted his life to protecting Nevadans. Throughout the election cycle, he focused on the need to improve the economy, education and public safety.

Sisolak, a former Clark County Commission chairman who in 2018 became the first Democratic elected governor in Nevada since 1994, faced headwinds of an unpopular president in Joe Biden. He also had to counter negative economic conditions, including rising inflation.

But his campaign leaned heavily into key Democratic legislative accomplishments over the four years of his administration, including the creation of a state public health insurance option, implementation of several gun control measures and the adoption of an update to the state’s 50-year-old education funding formula.

As the presumptive winner of the election, Lombardo will have to navigate a Legislature controlled by Democrats. Though Democrats hold both the Assembly and state Senate, they remain short of a supermajority needed to override any vetoes that might come from Lombardo’s office.

With Lombardo in control of the state’s executive branch, it’s likely there will be more tension surrounding negotiations, vetoes of legislation and less passage of progressive policies overall in the upcoming legislative session set to begin in February. It all depends on how the governor and Legislature approach communications with one another.

After winning by fewer than 5,000 votes in 2018’s “blue wave” election, Ford has secured a second term as attorney general after defeating Chattah, a firebrand Republican and a civil and criminal defense attorney in Las Vegas.

Chattah conceded the election in an email Friday, thanking her supporters.

“For the last year and a half, I have traveled up and down Nevada, meeting the hard-working men and women of this state,” Chattah wrote in the email. “And although we did not get the outcome we were looking for, it was truly an honor to be the GOP nominee and fight for each and every one of you.”

Throughout his political career, Ford has made eliminating gun violence one of his top priorities. He has supported expanding background checks, banning bump stocks, limiting ghost guns and using Nevada’s red flag law, which allows police and family members to petition a court to temporarily take away the guns of someone deemed a threat to themselves or others.

Though Chattah often seized on individual instances of violent crime in Southern Nevada, promising to “make crime illegal again,” Ford has also been supportive of major criminal justice reforms passed by the Legislature since 2019.

That includes AB236, a criminal justice bill approved in 2019, which aimed to reduce the state’s prison population by lessening sentences for some nonviolent crimes and using diversion programs in place of prison time. Ford told The Nevada Independent earlier this year that his office plans to put forward a bill in the next legislative session to “address fentanyl and the weight limits that are associated with being able to prosecute those who have fentanyl.”

Chattah, who gained prominence through her lawsuits challenging several COVID-19 policies of Sisolak’s administration, had cast herself as an opponent to the establishment, promising to indict and convict corrupt government officials.

But her fiery rhetoric also left her without support from some fellow Republicans. In July, more than a dozen Nevada Republicans, including former state Senate Republican Leader Michael Roberson and former Nevada GOP Chairwoman Amy Tarkanian, formed a Republicans for Ford committee to support the vulnerable Democratic incumbent.

The formation of that committee came as Chattah’s campaign had been marred by controversy. In a text message leaked by Political.tips in January, Chattah said Ford “should be hanging from a (expletive) crane.” She later defended that comment, tying it to Ford’s opposition to Education Savings Accounts, a Republican-backed school voucher program, which aimed to give parents the ability to use state funds to send their children to non-public schools.

As the projected winner of the race for secretary of state, Democrat Cisco Aguilar — an attorney and former member of the Nevada Athletic Commission — becomes the first Democrat to hold the position since 2015.

He defeated Republican Jim Marchant, a former assemblyman and one-time congressional candidate who had staked his candidacy in large part on evidence-free claims of fraud from the 2020 election. The office is charged with a number of duties, most relating either to the state’s elections or to business licensing. However, this year’s race was nearly entirely consumed by the electoral side of the equation, as Marchant and Aguilar dueled over competing visions shaped by the embrace — and rejection — of election conspiracies.

Aguilar replaces Republican Secretary of State Barbara Cegavske, who was elected twice before being termed out this year.

Marchant had entered the race early last year and quickly earned the backing of prominent election-deniers both in Nevada and nationwide,including MyPillow CEO Mike Lindell and Nevada-based far-right donor Robert Beadles. He not only challenged the legitimacy of the 2020 result, but also worked to end the use of electronic voting machines in rural counties.

After being appointed to the position by Sisolak in December 2021, Cano Burkhead is poised to become one of the shortest-tenured lieutenant governors in state history, following her projected loss to Anthony.

In a relatively quiet race, overshadowed by the high-profile race for governor, Anthony, a former police officer and a Las Vegas city councilman for more than a decade, campaigned as a potential bulwark to Democratic rule in Carson City.

The lieutenant governor is next in the line of succession if the governor is unable to perform their duties. It is a part-time role with few major responsibilities, including the largely symbolic role of presiding over the state Senate, a chair role on the state’s tourism commission and oversight of the recently formed Office of Small Business Advocacy.

Cano Burkhead, a former principal, was appointed to the role less than a year ago after former Lt. Gov. Kate Marshall resigned from the post to take a position with the Biden administration. On the campaign trail, she touted her experience as an educator, and Cano Burkhead, a first generation Latina, said she hoped to remove barriers for others.

Anthony, who has promised to “advocate for conservative, constitutional values” in the position, has maintained that his 2020 electoral loss in a Clark County Commission race was stolen, despite a recount finding that Democratic candidate Ross Miller defeated him by 15 votes.

Anthony’s victory in the race flips the lieutenant governor’s office to Republican control once again, after Marshall’s 2018 win marked a rare Democratic win for the office. Prior to that, a Republican had represented the office for 28 years.

The race saw higher-than-usual spending for the statewide office, which is responsible for managing state investments and finances, as well as a record number of television ads from Conine. Conine also filed several election complaints against Fiore, accusing her of violating campaign finance law by not refunding excess contributions. Fiore filed amended contributions and expense reports just days before Election Day, but discrepancies remained.

During his campaign, Conine garnered support from people across the political aisle, including former Nevada GOP chair Amy Tarkanian, who denounced Fiore for being under investigation by the FBI and praised Conine’s leadership during “challenging economic times.”

As treasurer, Conine divested the state from assault weapon manufacturers and created and managed the state’s rental and mortgage assistance programs during the pandemic. He has also proposed addressing generational poverty by creating savings accounts for every child born on Medicaid — a program called baby bonds, where money is deposited at the time of birth and grows with interest until the child is 18 years old.

Fiore jumped from the crowded governor’s race to the treasurer’s race relatively late in the election cycle. Fiore is widely known for her pro-Trump credentials and attention-grabbing publicity stunts, including a television commercial where she shot bottles labeled “CRT” and “vaccine mandates” and a glamour calendar of herself posing with assault rifles. She has represented Ward 6 on the Las Vegas City Council since 2017.

In the race for the relatively obscure position of state controller, Republican Andy Matthews is projected to defeat his Democratic opponent, former five-term Assemblywoman Ellen Spiegel.

The controller functions as the chief fiscal officer of the state. Controllers serve four-year terms and are responsible for processing and recording the state's financial transactions, registering vendors, settling claims against the state and collecting debts owed to the state.

As far as fundraising totals, Matthews and Spiegel had similar money hauls, but Matthews was the only candidate in the race who ran ads on television.

Matthews’ projected win flips the former Democratic-held seat Republican. The last time a Republican was elected to the seat was in 2015.

Correction: This story was updated at 8:11 p.m. Friday, Nov. 11, 2022, to correct that Lombardo would be the second Nevada governor to have formerly served as a county sheriff, not the first.