“Defund the FBI” is not a new position for Nevada Republicans 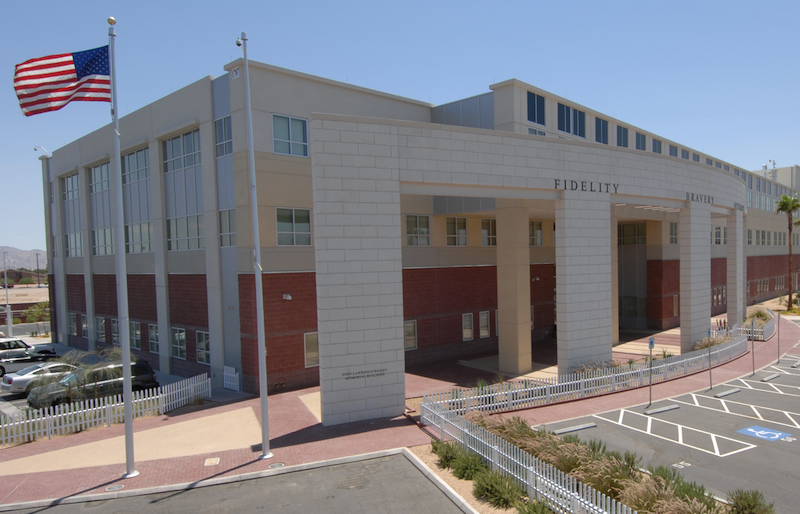 It’s admittedly tempting to chuckle at Republican concerns regarding prosecutorial discretion and the behavior of law enforcement officers in the wake of the Federal Bureau of Investigation’s search of Trump’s home at Mar-a-Lago.

When former attorney general and Republican nominee for U.S. Senate Adam Laxalt described the search as an example of something that happens in a third-world country, did he forget about the time his gubernatorial campaign manager threatened The Nevada Independent’s CEO over email a few years ago? Or what about the time he tried to vote “present” during the most straightforward pardoning in state history because he wanted to appear “tough on crime”? Is threatening the press and keeping an obviously innocent man in prison a third-world power grab, or is it just first-world political mendacity?

Speaking of past and present Republican attorney general candidates, this year’s Republican candidate for attorney general believes executing search warrants without arresting anyone is an incitement to civil war, yet also believes her chief political rival should be lynched. Sigal Chattah also compared the search of Mar-a-Lago as a slippery slope towards desaperacidos — dissidents who were “disappeared” during the rule of Argentina’s right-wing military dictatorship in the late 1970s and early 1980s — and then claimed “this is how civil wars are started.”

Don’t cry for me, boxes of classified information?

Then there’s Rep. Mark Amodei, who somehow thinks the FBI and Department of Justice are “politicized” now, yet the Border Patrol, which was promised a Mexican-funded wall to assist their efforts by the previous presidential administration, is not.

Before we all have a good laugh at the seeming hypocrisy of Republicans calling for the defunding of police, however, a little context is in order. Fortunately, Nevada is the perfect place to find it.

Conservative views in Nevada surrounding federal law enforcement have always been, to put it mildly, mixed. The rhetoric Cliven Bundy and his friends used to justify deploying snipers to “protect” his ranch in Bunkerville from Bureau of Land Management personnel in 2017 was pulled straight from the Sagebrush Rebellion, a populist rebellion of sorts that began in Nevada during the Carter administration and spread to neighboring states in opposition to steadily increasing restrictions applied against federally-owned lands.

Though the energy of the rebellion dissipated some during the Reagan and Bush administrations (they were Republicans, after all), the land use issues that motivated the original movement never completely subsided — for example, Bullfrog County, Nevada’s ill-fated attempt to tax the federally proposed Yucca Mountain nuclear waste repository out of existence by creating a state-managed zero-population county directly on top of it, was created and dissolved during the final years of the Reagan administration.

Nevada’s 1970s-era Sagebrush Rebellion, in turn, borrowed heavily from a similar land use protest movement which began in Colorado following the passage of the Forest Reserve Act of 1891, which closed large swaths of federally-owned lands off entirely from outside use — and also from outside intervention against seasonal forest fires (this didn’t end well). For over a decade, politicians and editorialists throughout the west complained, using increasingly heated rhetoric, against the new restrictions, which pulled tens of millions of acres of forests and mountains out of productive use.

Much like Nevada’s Sagebrush Rebellion nearly a century later, however, Colorado’s protests didn’t change much — though the original forest reserves of the late 19th century were renamed “national forests” in 1907 to reflect that were no longer to remain completely off limits, federal lands were never meaningfully ceded to state governments, nor were many of them privatized.

Stories like the Oregon Land Fraud Trials, in which timber and mineral extraction companies paid Oregonians to pretend to homestead federal land in exchange for the right to purchase the land after the federal government signed title to the “homesteader,” certainly didn’t increase anyone’s appetite for a more laissez-faire approach to federal lands management. At the same time, the California Water Wars — a series of increasingly violent and pyrotechnic protests from Owens Valley residents following the construction of the Los Angeles Aqueduct, which completely drained Owens Lake and drastically lowered the water table of the valley — reminded many rural residents that threats to their way of life didn’t just originate in Washington, D.C.

These events created the fertile ground which nourished first the Posse Comitatus movement — an explicitly religious and anti-semitic organization which, among other things, attempted to assassinate Republican Vice-President Nelson Rockefeller — and the modern-day “constitutional sheriff” movement. The core belief uniting both movements is the idea that county sheriffs, not federal or state law enforcement officers, are the highest law enforcement officers within their counties. Consequently, sheriffs have not only a right but a duty to refuse to enforce laws they believe are unconstitutional. This belief in the supremacy of county-level law enforcement was the logic that motivated Cliven Bundy’s demand that then-Clark County Sheriff Doug Gillespie disarm the federal officers on his ranch.

From a legal standpoint, the supposed supremacy of county-level law enforcement doesn’t have a leg to stand on. In Nevada, counties and other municipal governments are constitutionally creations of the state government. Furthermore, the Legislature is constitutionally empowered to even abolish the office of sheriff from a county’s government, should they ever choose to do so. It’s a little difficult for someone to be the chief law enforcement officer over their territory when their job and even the territory they’re protecting can both be erased with the stroke of a pen.

From an emotional and political standpoint, however, the notion that county sheriffs ought to be the chief law enforcement officers in their counties strikes a powerful chord — one which former President Trump had no problems harmonizing with, both before and while he was in office. Many laws, like state gun background checks or federal prohibitions against cannabis use, aren’t universally popular, and are frequently intensely unpopular among people who live in similar communities. Consequently, there can be political gain to be had by encouraging the best-armed local politician to announce that they will, say, refuse to perform gun background checks or recognize Barack Obama as the 44th president of the United States.

Speaking of Barack Obama’s election, Donald Trump didn’t recognize that one, either. At least he’s consistent.

To be fair to conservatives who possess a dim view of federal law enforcement, it’s not like the FBI and other federal agencies have an unblemished record of fairness and evenhandedness. Federal agents, like most government officials, are almost impossible to sue and enjoy qualified immunity, even when their actions have little to do with their jobs. Due in no small part to the lack of accountability applied to them, they’re frequently sloppy in their attempts at bringing others to justice — when that’s what they’re doing in the first place.

That sloppiness is why Cliven Bundy and his family, despite attempting to incite an armed insurrection in our state so his family would no longer have to pay range fees, remain free. Instead of following the rules and prosecuting him by the book, the U.S. Attorney’s Office in Las Vegas tried to hide evidence and suppressed potentially exculpatory documents. When both The Intercept and Slate, neither of which are exactly known for their sympathies for right-wing causes, agree that it’s better for Bundy’s family to be free than it would have been for his flawed prosecution to succeed, that tells you something about the competence and fairness of federal law enforcement.

This isn’t a new pattern of behavior, either. The Church Committee, chaired by Sen. Frank Church (D-Idaho) in 1975, famously revealed illegal spying operations against American citizens by the Central Intelligence Agency, the National Security Agency, and the FBI — including monitoring and harassment of Martin Luther King, Jr. and other civil rights organizations. Even after the illegal activities of COINTELPRO were discovered, the FBI still spied on Gary Gygax, one of the co-creators of Dungeons & Dragons. The FBI has also maintained a recurring habit of providing encouragement, weapons, and support for terrorist plots so they can prosecute those foolish enough to execute their plans — this practice of entrapment ultimately allowed the alleged attempted kidnappers of Michigan Gov. Gretchen Whitmer to go free a couple of years ago.

Having acknowledged all of that, conservative loyalty towards county sheriffs — and antipathy to federal law enforcement officials — is every bit as mercurial and situational as any Democratic cheerleading of the FBI’s prosecution of Donald Trump might be on such things right now. Before winning the most recent Republican gubernatorial primary (deal with it, Joey Gilbert), Clark County Sheriff Joe Lombardo was frequently called to the carpet over his agency’s seemingly inadequate level of cooperation with federal immigration officials. Former president Trump, meanwhile, not only launched Operation Legend, which promised a “surge” of federal law enforcement officers to several cities, but also simultaneously reduced federal funding of local law enforcement agencies.

It’s also not like local and state law enforcement officers have a squeaky clean history, either. Wikipedia maintains a list of gangs members of the Los Angeles County Sheriff’s Department have been associated with over the past five decades — the full-scale investigation of the department launched a few months ago is likely to add a few more to the list. Speaking of Wikipedia, it also maintains a fairly comprehensive list of incidents of misconduct in the Las Vegas Metropolitan Police Department — since Clark County sheriff candidate Kevin McMahill’s incident with the sex worker, and his subsequent failure to pass a polygraph test when asked about it, didn’t lead to a conviction, confession, plea bargain, or some other sort of administrative disciplinary action, it didn’t make the list.

Unfortunately, the searching of Trump’s resort isn’t going to spark a serious transpartisan conversation about the role of law enforcement in American society. It’s also not going to spark a serious conversation around the overlapping roles of federal, state, and local law enforcement, how they conflict, and how they can help hold each other accountable. Instead, the overheated rhetoric of rural social justice is being harnessed once again to try to shield yet another powerful individual who seeks to evade responsibility for his actions — along with a self-selected coterie of hangers-on who each hope that, if he can escape justice, maybe they can when their time comes, too.