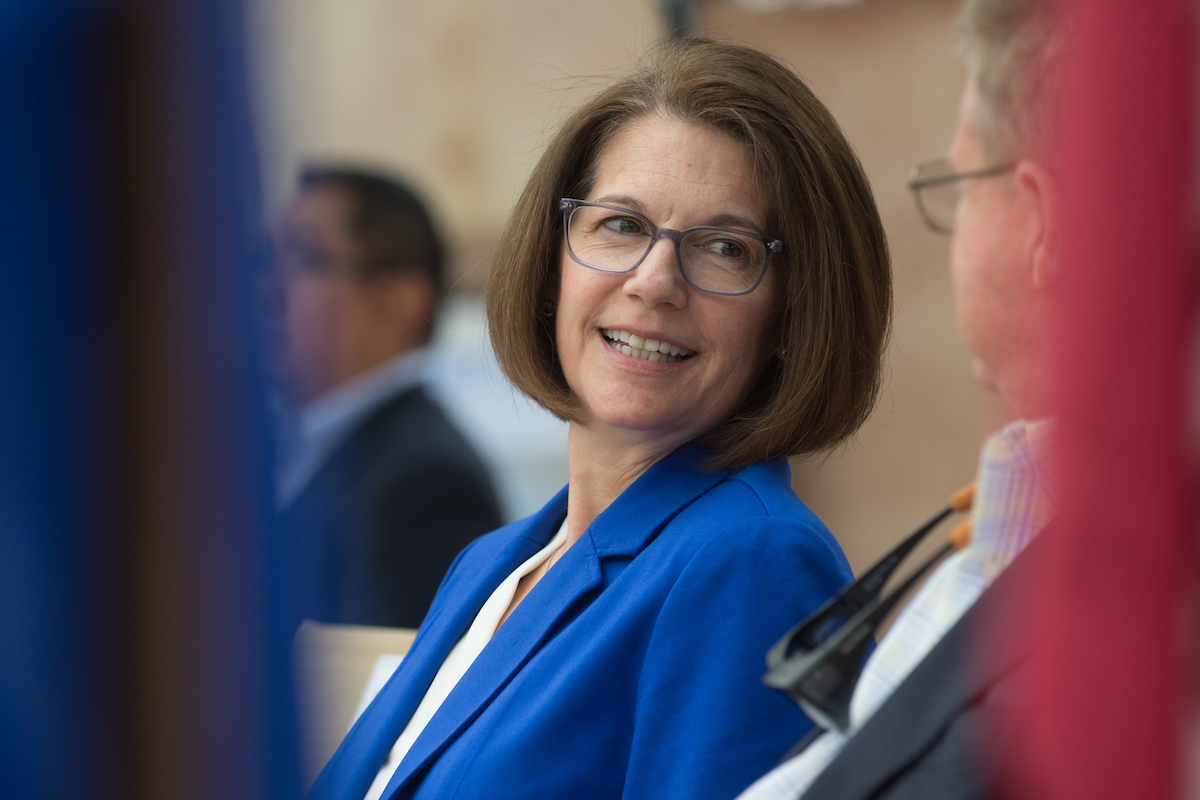 A Spanish-language TV ad funded by the National Republican Senatorial Committee (NRSC) claims Sen. Catherine Cortez Masto (D-NV) is soft on crime and pointed to her stint on the state pardons board – a message that Republicans view as potent to voters they think can swing this year’s elections.

The ad, which began airing in Nevada last week, claims that she voted “more than 75 times to minimize the sentences of violent criminals” between 2008 and 2014 as a member of the Nevada Board of Pardons Commissioners while she was attorney general.

Cortez Masto’s campaign said the claim was “demonstrably false,” because much of the board's work involves restoring certain rights to previously incarcerated people, rather than reducing the length of their prison sentence. The campaign also noted that she served on the board under two Republican governors — Jim Gibbons and Brian Sandoval. Any board decision needs a majority, including the governor, to pass.

An analysis of the voting decisions cited by the NRSC, the campaign arm of Senate Republicans, showed that Cortez Masto voted for leniency 63 times and voted against leniency 38 times over the 2008 to 2014 period, including for some nonviolent crimes.

The Cortez Masto campaign said she voted to commute the sentences of violent criminals 35 times, not 75, representing 11 percent of the 321 votes she took. Twenty-nine of those 35 votes were for larceny/burglary, which is technically a category of violent crime.

Cortez Masto voted to grant pardons 43 times during her tenure on the board, which the NRSC may be incorrectly citing as granting a reduced sentence, her campaign said. The pardons were granted once inmates were already released from incarceration or performed required service. It does not reduce a prison sentence or erase a conviction or, as the NRSC claims, return criminals to the streets of Nevada.

The pardons board consists of the governor, the seven justices of the state Supreme Court and the attorney general. Cortez Masto served two four-year terms as attorney general, beginning in 2007, before being elected to the U.S. Senate in 2016.

The board typically meets twice yearly and has wide latitude to reduce sentences or pardon individuals. Those actions include nullifying the consequences of the original conviction, such as loss of voting rights, loss of the right to bear arms, or occupational licensing restrictions.

But the NRSC stands by its claim. It noted that records were unavailable for all votes cast by each board member, but available records did show that the board took up 347 cases and voted 270 times to either commute sentences or give pardons. Those required a majority of the nine board members, and the NRSC contends that Cortez Masto helped make up that majority more than 75 times during her tenure on the board.

The research memo concedes that it is unclear how Cortez Masto voted on all board matters.

Laxalt also served on the pardon board while he was attorney general between 2015 and 2019 after Cortez Masto. Similar to Cortez Masto, records of all the votes he took during his tenure on the board were not readily available. He controversially cast the lone vote in 2017 against pardoning the wrongfully convicted Frederick Steese for a 1992 murder.

Republicans have been campaigning on crime, which recent polls show is a top issue among voters.

“Americans' concern about crime and violence in the U.S. has edged up in the past year, and for the first time since 2016, a majority (53 percent) say they personally worry a ‘great deal’ about crime,” according to a Gallup poll from April.

The ad also comes as the GOP has sought to increase its outreach to Latinos. Democrats saw a substantial vote shift in the 2020 election, with 63 percent of Latinos voting for President Joe Biden, down from 71 percent of Latinos voting for Hillary Clinton in 2016. Though Biden won Nevada in 2020, the Democratic ticket lost ground among Latinos from 2016 to 2020 and the GOP hopes there is an opportunity to further chip away at that voting bloc.

The ad also claimed the Nevada Democrat voted against legislation to prevent drug trafficking on the border.

Cast in March in connection with the passage of the American Rescue Plan in March 2021, the vote came during a marathon voting session, or so-called vote-a-rama. As part of the budget reconciliation process, the vote-a-rama is typically used by the parties, predominantly the minority, to generate “gotcha” votes for political ads.

Sen. Todd Young (R-IN) offered the measure, which would have provided $300 million to the U.S. Customs and Border Protection for technology "to detect fentanyl and other drugs," Young said on the Senate floor.

The amendment would have been paid for by striking a provision in the bill granting federal workers 600 hours of paid leave.

The provision was meant to help federal law enforcement, postal workers, and other public service workers if they became sick with COVID-19, had to care for a sick family member, or had to stay home with children while schools were closed, Cortez Masto’s campaign said.

During the debate, Sen. Chris Van Hollen (D-MD) argued that the amendment would be unfair to federal workers, many of whom he represents, partly because the bill included funding for pandemic paid leave for private sector workers.

The amendment failed, with all 50 Democrats voting against it and all 48 Republicans voting for the amendment. Two GOP senators did not vote.

As evidence for support for cracking down on crime related to crossings at the southern border, her campaign pointed to comments she delivered at a hearing last year where she stressed the need for collective effort of state, local, federal and partners in other countries to address “transnational, criminal enterprises that continue to engage in drug trafficking, human trafficking, money laundering, weapons trafficking across the border.”

The ad also claims that police groups opposed her, citing an article from the Nevada Globe and was denied by her campaign.

Laxalt is endorsed by the Public Safety Alliance of Nevada (PSAN), and the National Association of Police Organizations, which represents more than 1,000 police associations and about 241,000 law enforcement officers across the nation. The union endorsed Cortez Masto in 2016.

PSAN was formed in response to action taken by the Legislature in 2020. That year, Democratic lawmakers in a special session approved a measure to roll back parts of the state’s “Peace Officers Bill of Rights,” a move opposed by many police union groups. As those changes took place, several major law enforcement organizations, including the Las Vegas Police Protective Association (LVPPA), which represents Las Vegas Metropolitan Police Department officers, left NLEC and formed PSAN. LVPPA is the largest police union in the state.

Her campaign noted that NLEC and NAPSO represent 19 law enforcement and public safety unions in Nevada and thousands of officers across the state. Last week she was endorsed by Reno Police Chief Jason Soto, who highlighted her work to support Nevada police.

The campaign also pointed to comments to the Las Vegas Review Journal in July by an officer who works with the PSAN who said that “I firmly believe that she’s not anti-police” in reference to Cortez Masto.