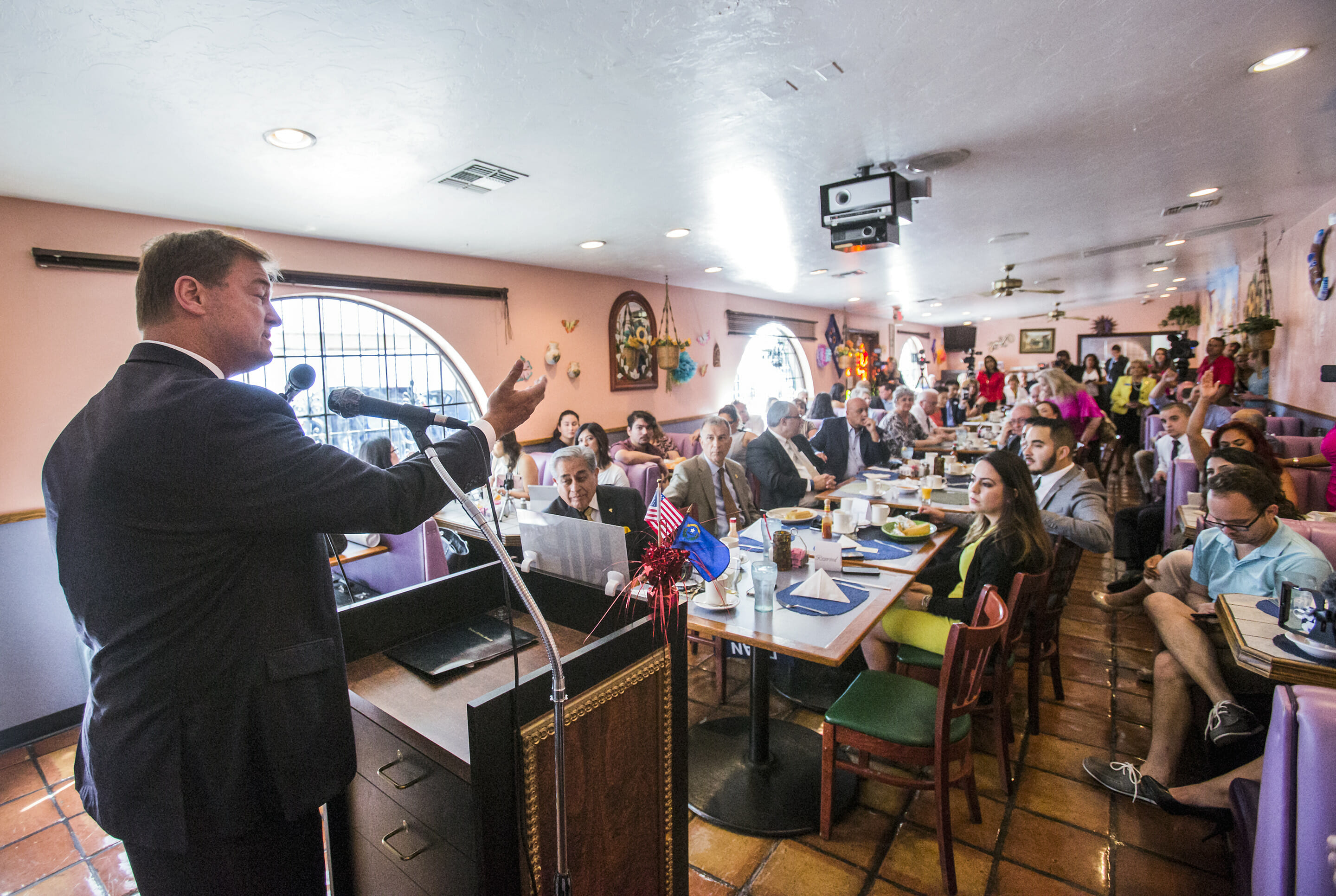 Republican Sen. Dean Heller championed a pathway to citizenship for otherwise law-abiding people in the country illegally, and said he opposed a pardon for an immigration hardliner former Arizona sheriff convicted of criminal contempt, during a talk Wednesday to the Hispanics in Politics group in Las Vegas.

But he also staked out opposition to sanctuary cities and open borders in a half-hour appearance at the breakfast event, which included pointed questions from progressive activists and a few disruptions from audience members shouting queries about DREAMers and health care out of turn.

“No Republican here in the state of Nevada has done more work ... to try to move this immigration policy forward, and I will continue to do so and that’s my commitment to you,” he told several dozen audience members at the Doña Maria Tamales Restaurant near downtown.

He took on other hot-button issues, and reversed course on a previous statement from this spring that seemed to signal support for Planned Parenthood.

“I don’t care if it’s direct or indirect. If you get federal funds and you perform abortions you don’t have my support,” he said.

And he railed about the Affordable Care Act mandates that require people to buy health insurance or face a fine. His mixed record on the Obamacare overhaul efforts this summer included a vote for a “skinny repeal” bill that left Medicaid intact but removed insurance mandates on individuals and employers.

“The individual mandate I thought was atrocious, was wrong and shouldn’t have been in Obamacare at all,” he said. “I don’t think your government should tell you to buy something that you can’t afford. And if you can’t afford it you pay a fine. Yet 90,000 Nevadans pay the fine.”

Estimates from the Congressional Budget Office indicate that about 16 million people would lose coverage over 10 years under the skinny repeal bill. In the past, he’s said he wouldn’t support a bill that takes insurance from large numbers of people.

“I cannot support a piece of legislation that takes insurance away from tens of millions of Americans, and hundreds of thousands of Nevadans,” Heller said during a press conference in June with Gov. Brian Sandoval.

But the loss outlined in the CBO estimates would come from a personal choice, he said.

The senator said he was proud to join 13 other Republicans in supporting an ultimately unsuccessful comprehensive immigration reform bill in 2013 even though he took some heat for it. He also pointed to his co-sponsorship of a border security bill backed by Texas Sen. John Cornyn and the Bridge Act, which extends the benefits of the Deferred Action for Childhood Arrivals (DACA) program.

Heller is facing a tough path to re-election that includes a primary with businessman Danny Tarkanian, a frequent candidate who narrowly lost to Democratic Rep. Jacky Rosen last year and is taking more stridently conservative positions. But in a general election, Heller would have to reckon with a sizable Latino electorate that leans solidly Democratic and has been decisive in recent elections.

Tarkanian has criticized Heller’s support of a comprehensive immigration reform bill in 2013 as “amnesty” and was quick to tweet out a rebuttal when Heller said he didn’t support a pardon for former Maricopa County Sheriff Joe Arpaio, who was convicted of ignoring a judge’s order not to detain people merely on the suspicion that they were in the country illegally. Trump hinted in Phoenix on Tuesday that Arpaio would be pardoned, but said he didn’t want to do it that night because it would cause too much controversy.

“I strongly support pardon for Sheriff Joe Arpaio. @SenDeanHeller is wrong, as usual,” Tarkanian wrote, adding a link to NeverHeller.com, a site dedicated to touting Heller’s tepid, sometimes indiscernible support for the president.

Heller left the event after about 30 minutes to head up to Reno, where he was planning to speak at the American Legion conference headlined by Trump. The president was also expected to sign a bill Heller co-sponsored to streamline the appeals process within the Veterans Administration.

The senior senator avoided direct criticism of Trump during the speech and didn’t answer a reporter’s question about his forthcoming event with the president.

Heller fielded questions about his mixed record on Obamacare repeal, which included a vote to start debate on the matter, votes against two repeal bills and support of a failed “skinny repeal” measure. The latter would have removed the Affordable Care Act’s individual mandate and employer mandate but didn’t touch Medicaid.

“There’s only one reason why Medicaid was kept in that final version and that’s because of me,” he declared. “It was because of me and my efforts that we were able to protect low-income families in this state with the Medicaid expansion.”

Asked about projections that lifting the mandates would destabilize the insurance markets and force 20 percent premium hikes, Heller said “we’re going to get together in a bipartisan effort to see if we can solve some of those issues. But under Obamacare it was going up 15-20 percent every year anyway.”

He touted instead his Graham-Cassidy-Heller amendment, which he says will boost health care spending in Nevada by $600 million, or 49 percent, by 2020. The amendment turns Medicaid expansion money into a block grant that states could use how they choose, but critics of block grants say the amount of money usually doesn’t keep up with growth in demand, and others point out that the amendment’s funding formula would leave some states hurting much more than others.

“I think ultimately the states should decide what their health care should look like,” he said. “My bill and my amendment would expand health-care spending in the State of Nevada.”

National monuments and the environment

Heller also touched on a pending review of national monuments. President Barack Obama designated the sweeping Basin and Range and Gold Butte monuments late in his final term, and the Trump Administration is now reviewing whether to reverse those decisions.

Heller said he was meeting Wednesday afternoon with Interior Secretary Ryan Zinke, who has previously toured the monuments. The senator said he supports monuments but questions whether they should be so large and believes the process should be handled through Congress and not executive order.

“I don’t believe he’s going to reverse these monuments by any means,” Heller said about Zinke.”What he wants to take a look at is it really necessary to take 1 million acres away for areas that need to be protected but may only need a few square miles.”

And he dismissed concerns about drastic cuts to environmental protection programs that are outlined in Trump’s budget, saying Congress would do its own thing on a spending plan.