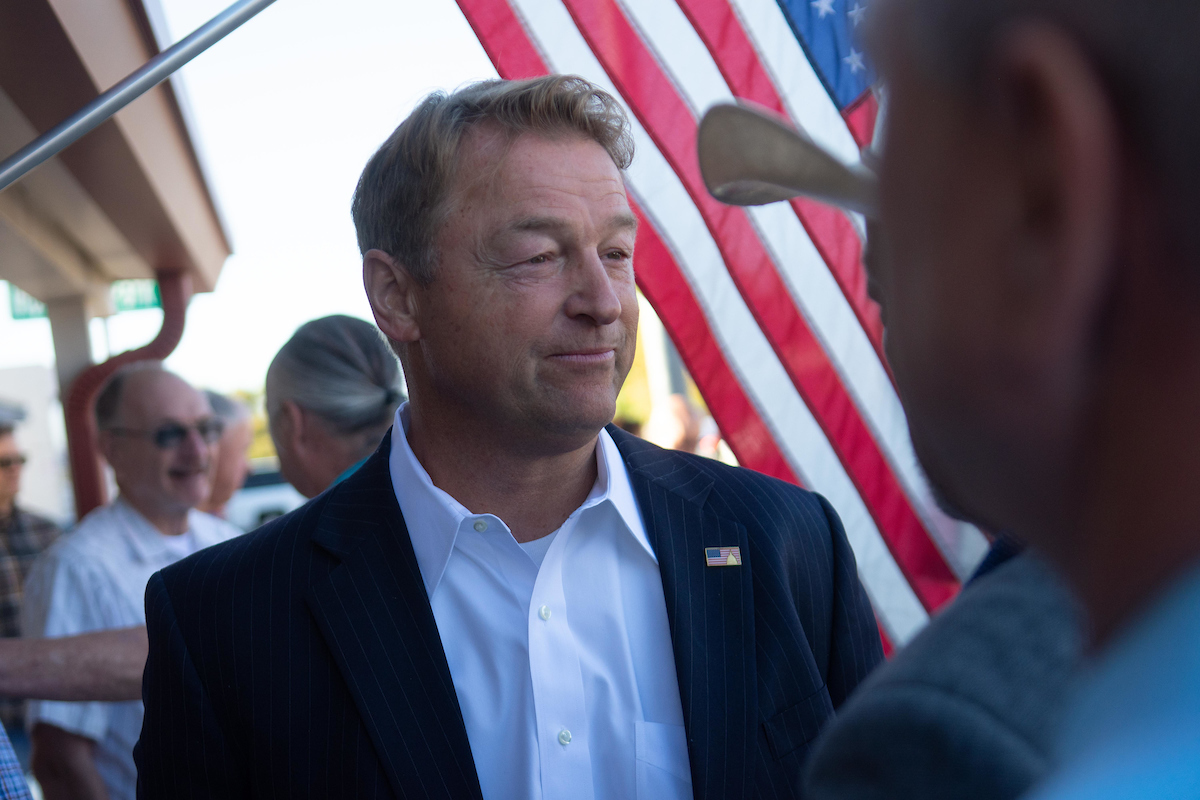 Out of a list of candidates that included Heller, Lombardo, Reno-based lawyer and former boxer Joey Gilbert and North Las Vegas Mayor John Lee, poll results showed Heller holding a lead over the other candidates, with more than 31 percent of respondents in support of the long-time Nevada politician.

Though Lombardo received the second-highest support among the candidates (23.2 percent), the results were even when respondents knew both Heller and Lombardo and a larger group of respondents (27.2 percent) remained undecided about who they would vote for during the June 2022 primary election.

In a race considered a referendum on Sisolak’s handling of the pandemic, poll results show large majorities of likely Nevada Republican voters oppose mask and COVID vaccine mandates and believe that President Joe Biden’s victory in the 2020 election was because of voter fraud. Respondents with more conservative views generally supported Heller, whereas those with more centrist views on issues such as abortion tended to favor Lombardo.

The poll, one of three conducted by The Mellman Group for The Nevada Independent, sampled 400 likely voters registered as Republicans and was conducted between Sept. 15 and Sept. 22 via landline, cellphone and text messages. The poll has a 4.9 percent margin of error.

Though polling shows Heller maintaining the lead, around half of all voters either want another candidate or are undecided, with pollster Mark Mellman on Sunday characterizing the race as anyone’s game.

“The reality is, Dean Heller does not have this primary race locked up by any stretch of the imagination. Lombardo has a real shot here,” Mellman said during a panel for IndyFest, The Nevada Independent’s annual conference on policy and politics. “If [Heller] was running, expecting he would have it locked up, and a clear shot at the general election, he needs to revise those expectations dramatically.”

As GOP candidates continue to campaign on questioning the validity of the 2020 results and future elections — an issue already raised by both Heller and Lombardo — poll results indicate that election security will be an important issue for Republican voters.

Mellman warned that pushing false messaging that the 2021 election was riddled with fraud could be a double-edged sword for candidates.

The poll results additionally show that Republican likely voters are staunchly opposed to many of the COVID-19 mitigation measures currently in place across Nevada. More than 70 percent of those surveyed said they were opposed to requiring people to get the COVID-19 vaccine in order to return to work in person, and two-thirds of respondents said they were opposed to the U.S. Centers for Disease Control and Prevention policy requiring everyone to wear a mask in public indoor settings in counties experiencing high or substantial levels of COVID-19 transmission — a policy adopted by Sisolak amid the Delta variant surge this summer and still in place across the state.

Republican Rep. Mark Amodei, who has publicly weighed running for governor since last year, was not included in the poll. Amodei says he plans to make a decision on a potential bid by the end of October.

When asked, 54 percent of respondents expressed a favorable opinion of Heller, compared with 19 percent who expressed an unfavorable view. Lombardo was also received favorably (48 percent favorable to 12 percent unfavorable) and his job performance was also rated positively — 57 percent.

Gilbert and Lee were mostly overshadowed by the top two candidates in the field. About one-third of respondents said they had never heard of either candidate, though both were overall viewed favorably by Republican voters polled. Gilbert received most of his support from respondents aged 18 to 39 and those living in Washoe County.

The ideological leanings of Republican voters in Nevada may play an important role between the two leading candidates — results show voters with more hardline conservative views generally swing more in favor of Heller.

One example is the Supreme Court’s landmark 1973 abortion ruling in Roe v. Wade.

More than 38 percent of respondents said they would be in favor of keeping Roe v. Wade in place, compared with 45.8 percent who said they would like to overturn the decision. Another 16 percent said they were unsure or did not know enough about the issue.

Statewide poll results indicated that 60.4 percent of respondents are in favor of Roe v. Wade, compared with 25.7 percent who believe the ruling should be overturned.

Among those surveyed who identified themselves as ideologically conservative, Heller carried a 10-point lead over Lombardo (33.4 percent to 23.3 percent). But among people who identified as liberal or moderate, Lombardo held a slight advantage over Heller (22.6 percent to 21 percent).

Lombardo’s less hardline conservative stances could be more appealing to the broader voting base, which may be important to some Republicans, Mellman said. The overwhelming majority of statewide voters support Roe v. Wade and may not look favorably upon candidates who are pushing to restrict or ban abortions, he said.

Though Lombardo and Heller have both pitched themselves as pro-Second Amendment candidates in favor of the right to bear arms, Heller holds an 18-point lead over Lombardo (38.1 percent to 19.8 percent) among respondents who are gun owners. In 2018, the National Rifle Association endorsed Heller in his U.S. Senate re-election, and Lombardo has at times strayed from GOP orthodoxy on firearm issues by voicing support for universal background checks on firearms sales and limits on certain high-capacity magazines.

Lombardo saw more support in Clark County, where voters elected him to the nonpartisan position of sheriff in 2014 and 2018. Among likely voters living in Clark County, Lombardo led Heller by 6 points (32.9 percent to 26.9 percent); however, Heller carried significant advantages over Lombardo in Washoe County (25 point difference) and the rest of the state (23 percent difference). Respondents in Washoe County even favored Gilbert to Lombardo by 6 points (18.8 percent to 12.6 percent).

But when the results are narrowed down to those who know both Heller and Lombardo, the primary is nearly a dead heat.

As a former statewide elected official, people throughout the state know of Heller, Mellman said, but added that Lombardo still has time to gain name recognition.