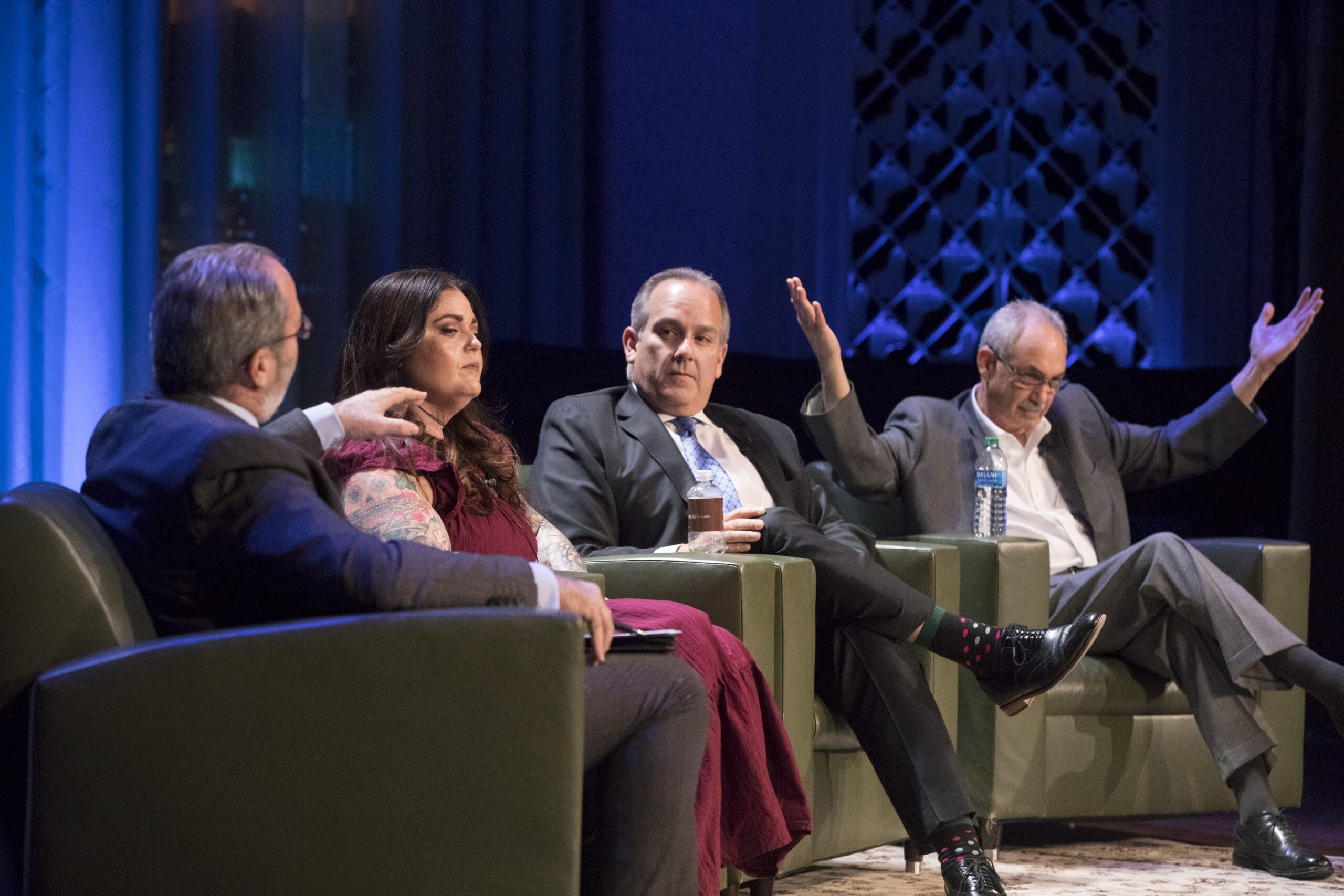 A high school teacher argued for more educator autonomy and less standardized testing to bring back joy to learning.

A superintendent called for community buy-in to public education instead of support with unreasonable strings attached.

And a union leader cautioned that the problems plaguing the nation’s fifth-largest district are state, not just county, concerns.

Here’s a look at some of the highlights from the event.

Vellardita faced pointed questions about his union’s decision to rescind sales and gaming tax hike ballot measure proposals that could have brought more than $1 billion more per year to schools, in exchange for extracting a compromise in the Legislature that will add about $165 million in new tax revenue from the mining industry to education coffers in this two-year budget cycle.

Combined, the proposals had about 400,000 signatures of approval from Nevada voters before they were withdrawn. A legal battle about whether they can be rescinded by the sponsor is ongoing.

“So we made it clear from the word go that when we filed our initiative petitions that we weren't wed to those revenue streams, that we wanted to force — and that's what we did — a discussion in Carson City around are we going to adequately fund education,” Vellardita said.

He said the difference between those discussions in the most recent session compared with others was that legislators taxed mining, with mining agreeing to the terms.

Pressed on why the union didn’t try to get more money by leaving the ballot measures in play, and instead agreed to a deal behind closed doors, Vellardita said that’s how the process works.

“We did what we said we're going to do and we're quite proud of it,” he said, adding that the initiative petition process in Nevada is “at the disposal of the public. We utilized it, and we’ll utilize it again.”

Penrod said she’s “yet to really see the full effects” of enhanced education funding in her own classroom, noting that she had survived several rounds of past budget cuts and narrowly avoided layoffs.

But she said a bigger issue was that teachers were not being rewarded for longevity service in the district, with a greater focus placed on matching the salaries of teachers out of state to entice them without rewarding those who continue to stick things out in Nevada.

“There's no incentive to stay,” she said. “At that point, you're matching people who have not even given you the service of the people who are here.”

She also criticized the district’s system of tying salary increases to a professional growth plan as “convoluted” and “so much work that nobody wants to go through it.”

That sentiment was rebuked by Vellardita, whose union nearly went on strike in 2019 over the district not including column pay in a proposed contract. He said that more than 12,000 educators had gone through the system over the last five years, and that it helped better align professional development standards with “your students that you're teaching so that your practice gets better.”

“At the end of the day, it shouldn't be a convoluted system that I have to spend hundreds of hours doing things to get a raise, and someone can move in from Texas or California and get higher pay than me, and I've been in your school district for 16 years,” she said. “Longevity matters. Knowing your students matters. Knowing the district matters.”

Vellardita used the example of 2014, when the district was able to solve a problem of 1,500 classroom vacancies by getting legislation passed to raise base salaries by $5,000 and add an incentive bonus for outside recruiting. He said those measures, and steps to retain current teachers, are what’s needed now.

“If folks think that kind of approach is not something that's needed, you're missing the significant crisis that we're in right now,” he said.

The need to improve recruitment and retention among CCSD educators is critical as the district continues to struggle with vacant positions. Penrod recently considered leaving, but said the thing that has kept her going is her students, to whom she remained dedicated even after her own mother died suddenly from COVID.

“My first concern was my kids,” Penrod said of her reaction after she received the news of her mother’s death. “The first thing I told my principal is, ‘Don't worry, I got it.’ (Students) are always at the forefront.”

Penrod’s students have made it clear to her that they also want to see her stay, she said. One instance came after they started their class with a “good news” moment — an activity Penrod said she does to ensure they all start their day on the right foot.

“I had a student – we were talking about good news – and he raised his hand and he goes, ‘And this is why you shouldn't leave. We need you,'" she said.

The Clark County school board approved a grading reform package in July 2021 that set a 50 percent minimum grade in place of a zero to 100 scale, allowed students to retake tests to better reflect what they have learned, and bans behavior, attendance, late assignments or participation from being factored into grades. The district has laid out a three-year implementation timetable, but the changes have drawn mixed reactions from students.

“They're not motivated because they know that it doesn't count for much,” Penrod said of the system, which downplays the weight of homework assignments and upgrades the weight of tests. “So all these small formative assessments don't count for much of their grade anymore, so they feel like they're constantly doing work to get to the mastery that's not counting for anything.”

She said the system seems to help “B” students move to “A” level, but has done little to stir in “D” and “F” level students the desire to remediate their grades.

Jara said the grading reform structure “came from a conversation with principals” but that he was open to making changes and had a working group dedicated to refining the policy.

“What I'm hearing, it's not new,” Jara said. “And this is why we're continuing to revise and relook … I'm not stuck on a certain way that this has to go. Children's lives are at stake.”

Jara said the district is working to address violence that has cropped up on campuses including Desert Oasis High School, which was locked down for two days in a row earlier this month for threats, fights and the discovery of a gun. The superintendent said he has a press conference planned for Tuesday where he will make announcements about how to confront the school safety challenges.

“We've seen that across the country. I mean, we see that on airplanes,” he said of unruly behavior. “I'm not making excuses for what's taking place. We're addressing the challenges.”

Jara argued that zero tolerance policies don’t work, but rather disproportionately affect children of color and shift the problem instead of changing the behavior.

“It's throwing a kid out into the streets,” he said. “Then it becomes the sheriff's problem.”

Vellardita, however, called on legislators to acknowledge the consequence of bills they pass, arguing that a push toward restorative justice practices is “unfunded, not practical, not implemented consistently” and leaves educators feeling helpless.

“You don't want to throw him out into the street, right? But you can't pass legislation that handcuffs educators and handcuffs the system to deal with disruptive behavior,” Vellardita said.

Penrod said that while she believes in restorative justice practices and ensuring the punishment fits the crime, she thinks teachers are “not authentically trained on how to handle these situations.”

“If I have a student who starts punching another student, I don't even have a protocol for that other than to call the front office and maybe a [campus security monitor] to come and grab them,” she said. “We need to have more structure in that sense, so that we know what is our next step.”

Jara defended his rocky, nearly four-year tenure, noting that the district was put under ‘fiscal watch’ for a dangerously low reserve budget by the time he arrived and that he had avoided budget cuts every year since his first. He noted that in addition to grading reform, the district had worked to develop a “leadership pipeline,” put additional support systems in schools for professional development and had been able to work with unions to successfully reopen schools and avoid conflicts that have affected other large school districts.

“There's been a lot of work, foundational things that have been put in place, that they're not sexy because you don't see them,” he said. “But it's setting us up now, to move forward in a quicker way.”

Vellardita said he would give Jara’s tenure an “incomplete” grade, noting issues including a divided school board, the COVID pandemic and Jara’s firing and rehiring late last year. But he warned that “it's easy to point a finger and say … he's the system.”

“I disagree. He’s not the system,” Vellardita said. “In fact, part of the problem isn't just Clark [County], it's a statewide problem.”

Asked why he had stayed on with the district even with the drama surrounding his attempted ouster last year, Jara said “I’m stubborn,” but wanted to continue “standing up for kids at the highest level.” Pressed on whether he will continue with the district beyond January, when his contract expires, Jara said “that's not up to me” but that he would “absolutely” want to stay.

Jara said he’s seen urban districts larger than his outperform CCSD. It’s not the size of the district that determines success, but community support — something he acknowledged can be lacking in Nevada.

“There's community buy-in in certain aspects, as long as you want to do what we want to tell you and how we're going to support you. Right? That there’s plenty of. But it's not about ‘what do you need?’”

He compared that attitude to Raiders fans who only support the team if they get to call plays and make hiring decisions.

“When you think about the work that our employees are doing for our kids, let's get behind our … 300,000 kids and our employees,” he said. “I'm just the quarterback here.”