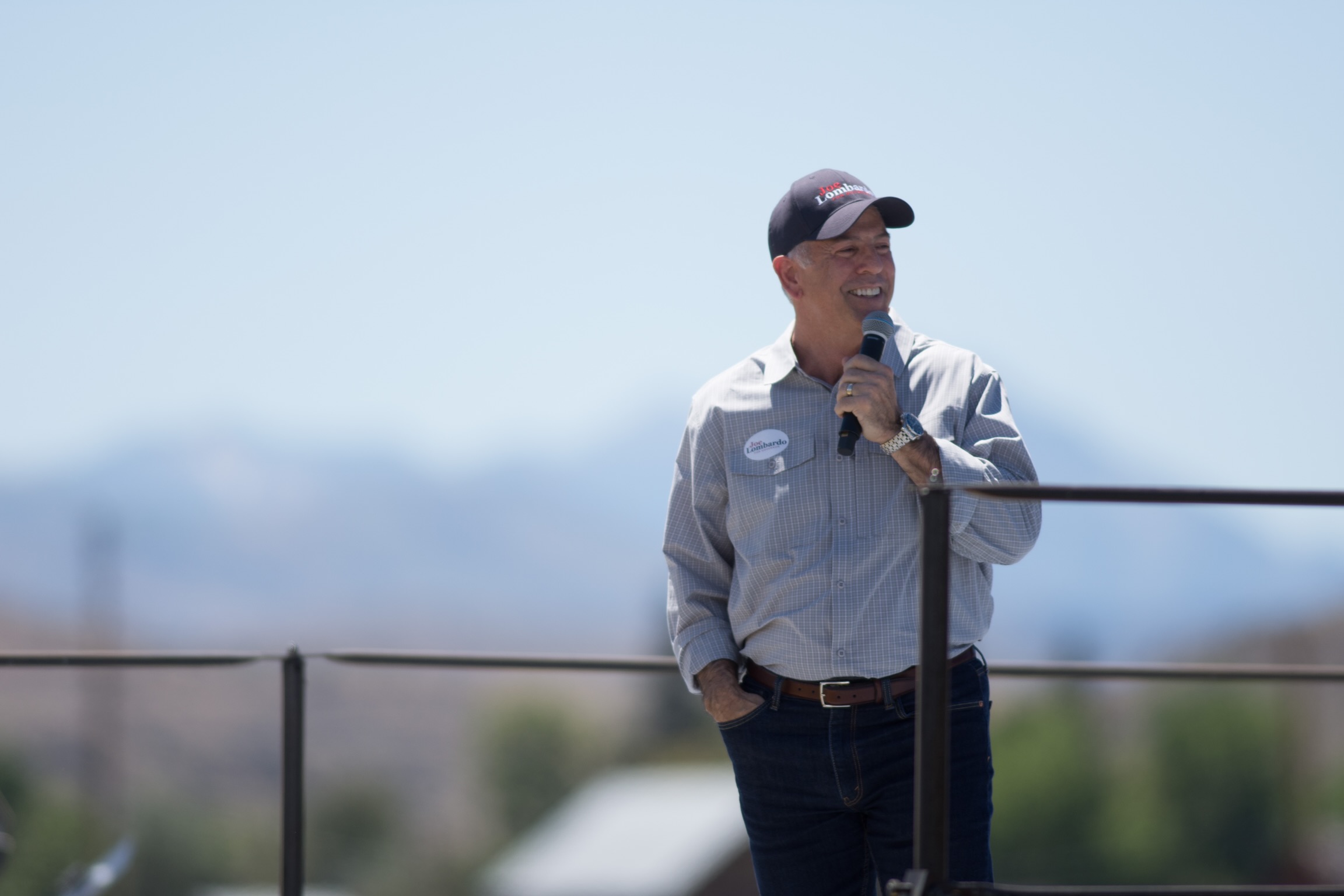 Not impressed with the state’s Pre-K-12 education system, including decisions that Gov. Steve Sisolak made for schools at the height of the COVID-19 pandemic, Republican gubernatorial candidate and Clark County Sheriff Joe Lombardo has released his priorities for Nevada schools if elected.

"Las Vegas area schools have been ranked worst in the nation for quality, and our state is ranked 49th in education – how is this acceptable?” he asked in a Tuesday press release.

The new list of ideas for reforming and improving Nevada’s education system marks an expansion of Lombardo’s position on education, as he has previously centered his focus on education around expanding school choice, promoting workforce development and preserving school safety.

He also criticized Sisolak for his leadership during the COVID-19 pandemic, though both candidates have expressed some similar goals for education in Nevada, including ensuring access to quality education regardless of ZIP code and working to curb the state’s teacher shortage.

Sisolak, like other governors across the country, temporarily closed schools statewide when the pandemic began in March 2020. But school districts were allowed to make their own reopening decisions for the following academic year. That led to the Washoe County School District bringing students back in person at a limited capacity for the 2020-21 school year, but the state’s largest district in Clark County continued fully remote learning for the majority of that school year.

In August 2021, before the start of last school year, Sisolak issued an emergency directive that required staff throughout Nevada to wear face masks inside of schools. Only K-12 students in Clark and Washoe schools were required to wear masks in schools, and they were mandatory for all students while on school buses. These mandates were similar to recommendations from the Centers for Disease Control and Prevention.

Lombardo has said Sisolak’s handling of the COVID-19 pandemic was a partial catalyst for his decision to run against Sisolak.

But the state’s negative reputation surrounding education was a problem long before the pandemic, and predates Sisolak’s term as governor. Lombardo’s plan to improve the state’s “failing education system” includes working with legislators, parents, students and educators to create a 10-year education plan with goals, objectives, and accountability measures.

Lombardo’s plan also targets school violence, an issue that was especially felt among Clark County schools last school year, During a press conference in late March, the school district’s chief of police shared that up until that point of 2021-22, his department had confiscated 25 firearms found on school campuses and reported more than 3,000 assaults, batteries and fights, which was significant for the district. The issue received national attention in May after a high school teacher was brutally attacked by a student.

After the incident, the Clark County teacher union cited a 2019 law, AB168, that seeks to reform student disciplinary practices to reduce expulsions through restorative justice, an approach that promotes non-punitive intervention and support to improve student behavior. The Clark County Education Association said the law “handcuffs” educators, and prevents them from disciplining students for violent behavior. But one of the law’s sponsors, Assemblywoman Selena Torres (D-Las Vegas), rejected that assertion and pointed out that the union had at one point supported the passage of the law.

But whether the law is helping or hurting schools and students, Lombardo has set his sights on repealing it as a way to address school violence.

“Assembly Bill 168 has been a disaster for our students and teachers,” he said. “It’s disgraceful and it never should have been passed.”

Read through Lombardo’s other education priorities below:

Restore funding for Read by Grade 3

Lombardo called for restoring funding for the Read by Grade 3 program, an effort launched in 2015 by then-Gov. Brian Sandoval, a Republican, as a way to ensure students read at grade level by the end of third grade.

The program was altered in 2019 with the passage of AB289, a bill that removed the mandatory retention requirement in the program, meaning that third-graders who had not reached grade-level reading skills were no longer required to be held back from advancing to the next grade.

“We have to have some negative sanctions associated with bad behavior. It’s not bad behavior when it comes to the kids, but it’s bad behavior as part of the policy,” Lombardo said about the program during a March interview with The Nevada Independent.

Lombardo’s statement Tuesday also asserted the program was “defunded by the Sisolak administration.” Funding for the program was previously reduced as part of pandemic-related budget cuts, but the end of the 2021 legislative session saw lawmakers restore roughly $500 million to the education budget. AB289 also added $11 million in funding to the program in 2019.

Read by Grade 3 still exists as a state program, and AB289 left many core requirements of the program intact. The program still calls for the development of local literacy plans, the presence of on-site literacy specialists at every elementary school and parental notification for students reading under grade level. Such students are also required to be provided with intervention services and intensive instruction in reading.

Even so, funds for the program no longer exist as an individual categorical grant for schools, and in 2021, were actually moved into the basic per-pupil funding amount that the state provides to schools, along with 25 other state categorical grants for education.

Lombardo’s priorities included “evaluating potential ballot initiatives that would allow for the break up of the Clark County School District and other school districts that are underperforming.”

Calls to divide the Clark County School District  in smaller pieces are not new, but those ideas haven’t gone far in the past. One of the most recent pushes came from Henderson City Councilman Dan Stewart. His political action committee hired a signature-gathering firm, and is collecting signatures for the potential statutory initiative.

Lombardo called for school board members “to have proper qualifications, obtain adequate training, and be required to spearhead community engagement efforts to better listen to the communities they serve.”

A similar idea was recently discussed at an August meeting of the interim legislative committee focused on education. A coalition of education and community advocates proposed adding appointed board members who are experienced in K-12 systems, finance and business. Clark County School Board Trustee Danielle Ford also suggested requiring more training for members.

These ideas stem from recent turmoil on the Clark and Washoe school boards, as in-person and online bickering among trustees sometimes took center stage during meetings. In Clark County, for instance, the fractured board fired and rehired the district’s superintendent, Jesus Jara, in a matter of weeks last year. And, in Washoe County, the school board considered censuring one of its own members who had been an outspoken critic of the district and was accused of spreading misinformation.

According to Lombardo, “social-reform curriculum” and “explicit, age-inappropriate books and materials” are being taught in Nevada’s schools.

The press release didn’t cite specific examples of the inappropriate books being taught or where they’re being used, and Lombardo’s campaign didn’t specify when asked by The Nevada Independent.

A spokesperson for Lombardo’s campaign told The Nevada Independent in a statement Wednesday that Lombardo “is against curriculum or school resources that push a political or ideological agenda,” but did not provide any specific example beyond that when asked.

Ensure every child has access to the best education

He defined that as “providing proper classroom resources and supplies and expanding school choice options, so that a student’s zip code no longer determines their future.” His language, in part, mirrors comments also made by Sisolak, and other politicians, including former U.S. Secretary of Education Betsy DeVos.

During a Wednesday event, Sisolak said “every child, regardless of their parents’ bank balance or ZIP code, deserves a quality education.”

Still, the two candidates disagree about how to best achieve that, as Lombardo has been a vocal advocate for school choice, including through expanding charter schools and using voucher-style education savings accounts.

Lombardo listed several priorities related to the treatment of teachers, including broadly advocating for educators to be respected and rewarded for excellence and innovation. But he also suggested the state’s chronic teacher shortage could be improved by reforming teacher licensure requirements.

He called for the licensure system “to welcome qualified teachers into our state and create an incentive system so new educators come and end up calling Nevada home,” adding that he hopes to invest “in educators trained in special needs and mental health education.”

Lombardo did not identify specific ways to change the licensing process or recruit special education teachers. Meanwhile, in August, Sisolak signed an emergency regulation that reduced substitute teaching license costs, and gave those employees more time to update their licenses in an effort to ease the state’s educator workforce shortages.

In a statement to The Nevada Independent, Lombardo’s campaign spokesperson said he would consider rewarding teachers with either salary increases or bonuses. But Lombardo previously did not commit to a broad raise for all teachers, a promise Sisolak made in his 2018 campaign for governor and accomplished during the 2019 legislative session.

Lombardo also highlighted improving school safety as a critical part of retaining and recruiting “the best and brightest teachers.”