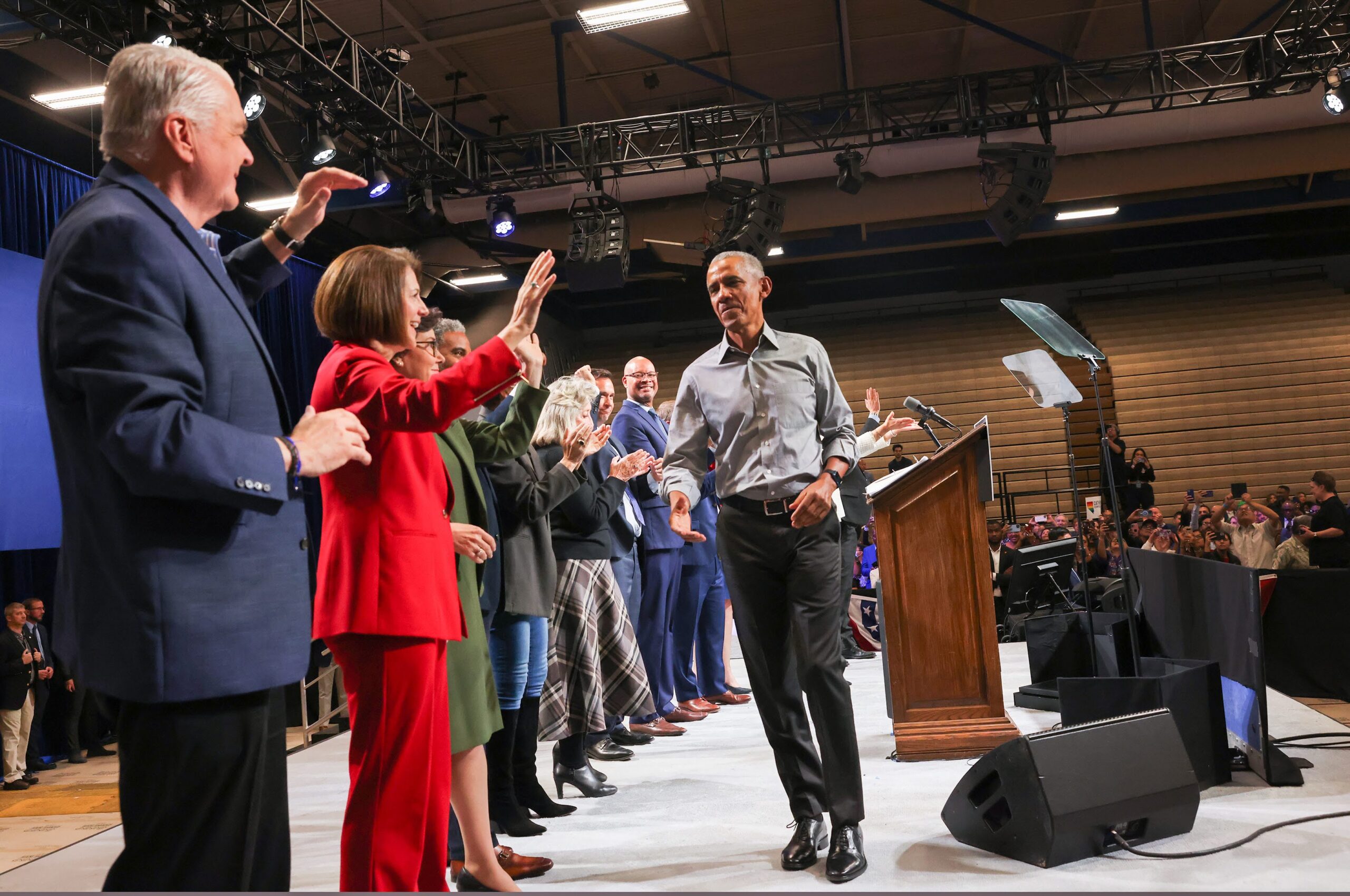 In a last-minute bid to energize Nevada’s Democratic base before a midterm election largely defined by poor economic conditions, former President Barack Obama made an existential small-”d” democratic pitch to a crowd of 2,000 in Las Vegas on Tuesday night, crystallizing his pitch for Democratic candidates by saying: “Democracy is at stake.”

“Democrats, let me tell you, are not perfect,” Obama told a packed gymnasium at Cheyenne High School, before referencing Republican attacks on elections. “But right now, with a few notable exceptions who deserve credit, most Republican politicians, they’re not even pretending that the rules apply to them. They seem to be willing to just make stuff up.”

The former president’s visit — scheduled just one week before Election Day and three days before the close of early voting — comes as a part of a nationwide campaign swing designed to boost Democratic candidates in the final window before the midterms.

It also comes at a time in which many of the most vulnerable candidates, including in Nevada, have struggled to match or exceed their Republican opponents in public polls amid rocky economic conditions and rising energy prices.

With every major Democrat up and down Nevada’s ticket standing in the wings, Obama praised the group of candidates on the issues of the day — namely economic policies, such as the Inflation Reduction Act, abortion access and democratic norms.

He also repeatedly derided Republican candidates as “not interested in actually solving problems,” but rather “in making you angry and finding somebody to blame,” and joked about Republican economic policies focused on tax and spending cuts.

“Because that's their answer to everything,” Obama said. “I'm not joking. Literally, it does not matter what's going on. When inflation is low and unemployment is high? They want tax cuts. When it's the reverse? Tax cuts … if there was an asteroid headed towards Earth right now, they'd all get in the room, they’d say, ‘You know what you need, we’ve got to cut taxes for the wealthy.”

Across his roughly 40-minute-long remarks, Obama targeted Lombardo for switching his positions publicly on issues ranging from abortion to guns to support for former President Donald Trump. He joked that the sheriff, if in Chicago, would be “wearing a [White] Sox cap on the south side, then he’d wear a Cubs cap on the north side.”

And in the Senate race, Obama praised Cortez Masto for having “gone after Big Oil for high gas prices,” and “[taken] on pharmaceutical companies” on drug costs — and went after Laxalt for his role as the Trump campaign’s Nevada co-chair in 2020, saying he helped “lead efforts to overturn the results of the last election.”

“So I think it’s fair to say that if he loses this race, he’s gonna do it again,” Obama said. “He has no actual evidence of election fraud, because there’s actually no widespread election fraud, but he’s not gonna let that stop him.”

The former president also reiterated Democratic talking points about abortion access, telling the crowd that the Supreme Court’s reversal of Roe v. Wade earlier this year was “a wake-up call, especially for young people, especially for a lot of young women who maybe took Roe for granted.”

“We can go backwards,” Obama said. “If Republicans take back the House, the Senate, we could be one presidential election away from a nationwide ban on access to abortion. And that might just be the beginning.”

Notably, Obama’s appearance comes in the vacuum of a visit from President Joe Biden, whose popularity has hovered at or below 45 percent in recent polls even after a spate of policy victories in the late summer.

When Biden officials have visited Nevada, it has often been without the appearance of top-of-the-ticket Democrats. That includes a visit to Las Vegas from Vice President Kamala Harris in August meant to tout passage of the Inflation Reduction Act. At the time, only Rep. Steven Horsford, running for re-election in Congressional District 4, appeared alongside Harris.

Republican candidates broadly took aim at the former president’s visit. On Tuesday afternoon, Laxalt took to Twitter to link Cortez Masto to comments John Legend (who also performed at the rally) made in 2020 about police funding. And in a statement released ahead of the rally, a spokesperson for Lombardo dismissed Sisolak for campaigning with “Californians and out-of-state politicians.”

Voters interviewed by The Nevada Independent said unity, bipartisanship and access to the ballot box are top of mind.

Terri Porter, 74, an education professional from California who now lives in the Southwest area, said she is scared for Democrats because the election is so close.

Her family is a mix of Republican and Democrat voters. She said she chooses Democratic candidates because they seem to care about issues important to “everyday people.”

Charles Blake, an 85-year old who retired after working for Clark County for more than three decades, said he was concerned about the Supreme Court’s decision earlier this year overturning Roe and called it “wrong” for members of the court to take away their “rights when they had worked many years to get where they were at.”

“As a woman, that’s your body, not the politicians’,” he said.

Andres Gutierrez, 20, attended the rally with his girlfriend, and said he appreciated Obama’s message.

“I just really agree with everything that he said. It really hit home,” he said.Tuesday’s visit marks the third Obama visit to Las Vegas ahead of a general election in the last four cycles, following visits in late 2016 and 2018.