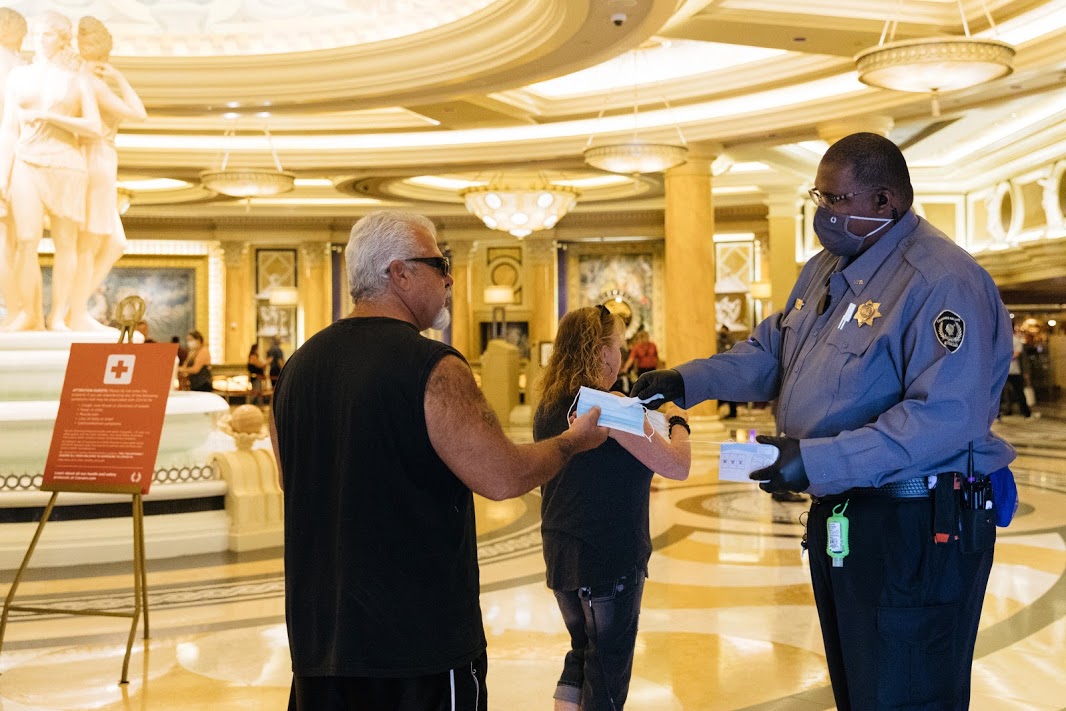 Citing a troubling uptick in the state’s COVID-19 cases and hospitalizations, Gov. Steve Sisolak has announced a new state mandate requiring individuals to wear a facial covering or mask while in public.

Sisolak made the announcement on Wednesday during a press conference in Carson City, following in the footsteps of neighboring states such as Washington and California that have issued mandates requiring people to wear masks while out in public.

The governor, who in the past has been hesitant to require mask-wearing, said he was concerned with both the rising COVID-19 caseloads in the state as well as photos and videos of crowded Las Vegas casinos with most people not wearing any kind of facial coverings.

“I don't know why, but when (did) protecting our health and our neighbors lives become a political, partisan, or even philosophical decision?” he said. “For me it's none of those. It's a medical necessity, a human obligation. And it’s good for businesses.”

The decision by Sisolak marks the first significant tightening of restrictions since Nevada entered “Phase 2” of limited business reopenings at the end of May, and nearly three weeks since the state’s casino industry was allowed to reopen for the first time since March.

The directive will take effect on Friday, and empowers OSHA, licensing boards, local governments and the attorney general to enforce the directive and if necessary impose fines or criminal penalties. Sisolak emphasized that it wasn’t his goal to heavily police individuals or businesses, but he thought a mandate was necessary in order to ensure a greater percentage of the population started to wear masks.

The directive also exempts some categories of individuals from the requirements, including:

As with the rest of the nation, the number of new COVID-19 cases statewide has ticked up significantly in the last two weeks, with the 7-day moving average of test positivity rate exceeding 10 percent for the first time since early May. In three of the last seven days, the statewide case count has jumped by more than 400, with a high of 462 new cases announced Tuesday.

Julia Peek, deputy administrator for the state’s Community Health Services division, said contact tracing efforts were continuing to get off the ground and help track potential future outbreaks. For example, she said that between June 4 and June 16, about 11 percent of people called by a contact tracer reported attending a mass gathering, and 12 percent said they had been to a “civic activist event.”

A study published earlier this month indicated that one of the most effective ways to stop person-to-person spread of the virus is through wearing a mask. Facial coverings and masks can limit the spread of the virus by preventing outward transmission of the virus from an infected or asymptomatic individual, as well as protecting a person surrounded by people who could be carriers.

Sisolak said he didn’t want to get to the point of having law enforcement walk around and ticket people for not wearing a mask, saying it was “troubling and really discouraging” that some people had made the act of wearing a mask into a political or partisan argument.

“We're hoping that they will understand the severity of the situation and voluntarily wear masks,” he said. “I mean, every responsible medical professional will tell you a mask helps reduce the spread of an infectious disease. Anyone who’s denying that is just denying reality.”

Several hours before the governor’s announcement, Caesars Entertainment made masks mandatory for anyone inside its casino properties, including guests, vendors, contractors and employees. The new rule went into effect at noon, with exceptions carved out for when people are eating or drinking. It builds upon the prior policy that required face masks for all employees and guests playing table games.

People who refuse to wear a mask after being asked to do so will be directed to leave, company officials said.

“We are immediately requiring everyone in our properties to wear masks, because the scientific evidence strongly suggests that wearing masks and practicing social distancing may be the most important deterrents to spreading COVID-19 from person to person,” Caesars Entertainment CEO Tony Rodio said in a statement.

Other top casino operators quickly weighed in after the press conference to express support for the new mandate. MGM Resorts acting CEO Bill Hornbuckle said the company supported the governor’s decision “and will begin to enforce according to his guidelines.”

A spokesperson for Wynn Las Vegas said the company “applaud(s)” the governor’s decision and that “face coverings will not diminish the unique experiences only Las Vegas can offer visitors.”

Sisolak — who said this week that a planned legislative special session to deal with the state’s budget would be pushed back to early July — said the latest figures developed by state and legislative fiscal staff indicated a $1.27 billion shortfall for the 2021 fiscal year, which starts next week. That’s about 25 percent of the approved operating budget.

The governor said that once tax revenue collection figures for the month of April are released in the next few days, he and his staff would update the projected budget shortfalls for both the current and upcoming fiscal years; the clearest picture yet of what cuts the state will have to make in order to balance its budget.

Sisolak emphasized “this is not a normal recession,” and that revenues could rebound quickly if everyone follows social distancing and mask-wearing guidelines. But he defended himself, without naming names, from criticism offered by legislative Republicans regarding his office not sharing budget cut details.

“It would be irresponsible to release every minute-by-minute revision of this budget proposal without proper vetting by our fiscal experts before receiving these numbers with the hopes of reducing the potential dramatic impacts to our state budget,” he said.

Unemployment insurance claimants who have not yet been paid, sometimes because of questions about whether they should be drawing from traditional unemployment benefits or the federally funded Pandemic Unemployment Assistance program for independent workers, have sued the state to try to speed up the benefits.

Asked about workers who are in that limbo, Sisolak said there’s no easy fix beyond waiting for the Department of Employment, Training and Rehabilitation (DETR) to work through the issues.

“Unfortunately there is not another answer,” he said. “DETR is working around the clock to resolve these issues. We’ve gotten to as many of them as quickly as we possibly can. Unfortunately, the ones that are still having trouble are usually an isolated case that they have a specific instance like you’re saying with their wages or whatnot. They have to be handled on a one at a time, case by case basis.”

Asked if there’s a way to speed the process, he noted that claims can sometimes take 30 to 60 minutes to resolve, and individual claims processors are sometimes limited to reviewing about 12 a day. Robocallers who clog the phone lines are also making it more difficult for claimants to receive help, he said.

“We are working through them as fast as we possibly can,” he said.

Sisolak also spoke to the departure last week of DETR Director Heather Korbulic, who said she was leaving because of threats to her personal safety. He declined to go into detail about threats to other state employees or himself but said there was a “whole team that tracks threats.”

“It's unfortunate that Heather was put in this position,” he said. “And sometimes people are just — I don't think they think before they go online and say some of the things that they say, and do some of the things that they do, but Ms. Korbulic really should never have had to go through what she went through and we're doing everything we can to keep her safe and all of our state employees safe.”

A moratorium on evictions is set to go through at least June 30, but Sisolak hasn’t yet announced whether that will be extended or how it would be lifted when the time comes. He said he expected the question would be addressed in the next three to five days.

“We’re still gathering some data and talking to some of the groups that are involved with this and should have an update on this in the next few days,” he said.

He did confirm that the moratorium’s protections would not disappear all at once.

“There’s a lot of anecdotal stories about individuals that unfortunately haven’t gotten their PUA or their [unemployment insurance]. It’s definitely something that we’re considering and we will have a phased in or rolled back approach,” he said.

School districts in Washoe and Clark counties have proffered plans on how to reopen that suggest staggering student schedules and mixing in-person and virtual learning. The possibility of children staying home for days or weeks when they would usually be at school has concerned parents who wonder whether they can return to work or afford child care to accommodate such an arrangement.

Sisolak said he was confident that state Superintendent Jhone Ebert would be able to work with districts, parents and teachers to develop individual reopening plans.

The governor said it was highly unlikely there would be any “infusion of state money” to help the state build up its child care capacity to handle the expected increase in demand, given the state’s ongoing budget shortfalls.

Jackie Valley contributed to this story.