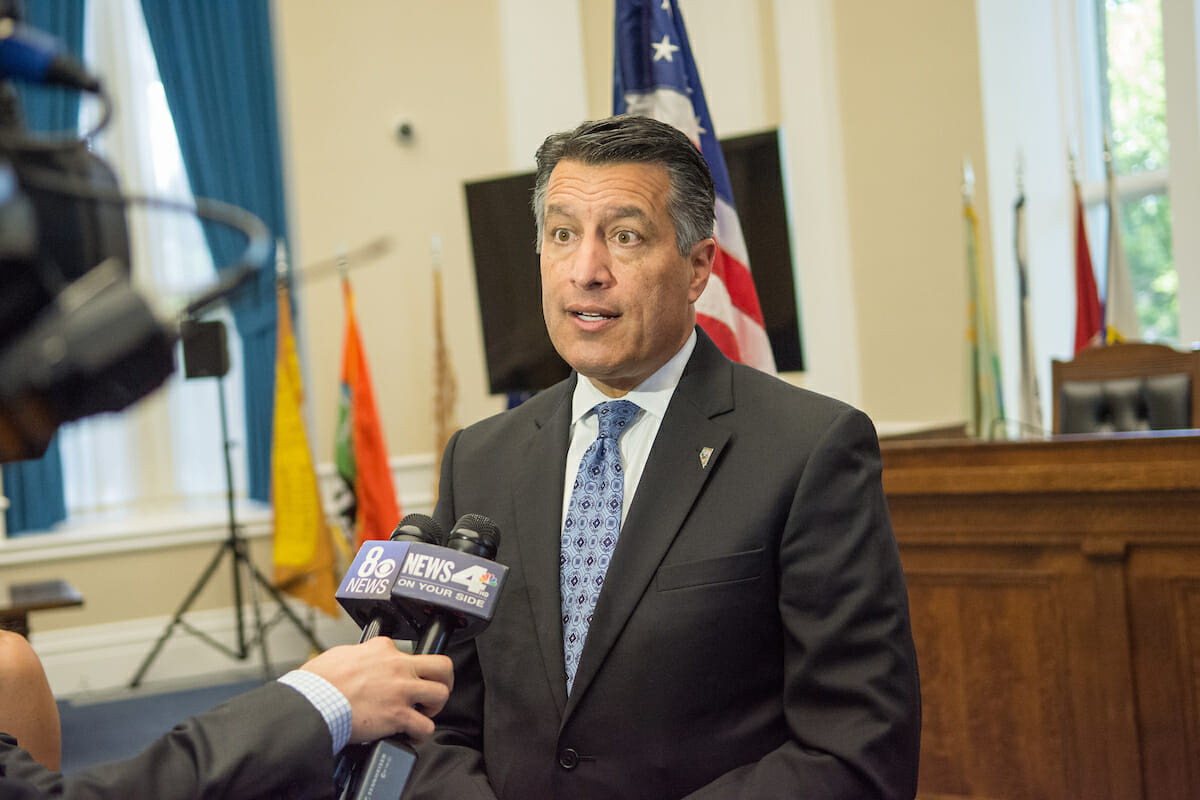 Gov. Brian Sandoval said Friday it’s too early to take a position on a major federal health insurance reform proposal backed by Republican Sen. Dean Heller, but he expressed concern about its impact on Nevada.

In an interview, the governor also questioned the necessity of a 2018 ballot question proposed by fellow Republican Michael Roberson banning so-called “sanctuary cities.”

Outside of an unrelated event with JAG students (a state-run dropout prevention program) at Silverado High School in Las Vegas on Friday, the Republican governor detailed his positions to The Nevada Independent on a number of issues ranging from his office’s suggestions on modifying the boundaries of a recently created national monument in Nevada to continuing efforts to replace the federal Affordable Care Act.

Sandoval declined to take a position on a measure backed by South Carolina Sen. Lindsey Graham, Louisiana Sen. Bill Cassidy and Nevada Sen. Dean Heller that would substantially change the federal Medicaid program by keeping most of the Affordable Care Act in place while moving to a block grant system and altering the funding states receive from Medicaid to a per-capita cap.

Although Heller told a conservative talk show host last week that Sandoval — the first Republican governor to expand Medicaid under the ACA and a vocal opponent of efforts to roll back funding for the expanded population —  was on board with the Graham-Cassidy-Heller concept, the governor said it would be “premature” for him to comment until a final version of the bill had been introduced and his staff had a chance to analyze the bill.

“I don’t want to commit to one thing or the other other, but I do have a litmus test, which is that Nevada be held harmless,” he said.

But the governor did say that reports like the one by left-leaning Center on Budget and Policy Priorities showing Nevada could lose more than $250 million in federal funding under the amendment had concerned him.

“That’s a problem,” he said. “I’ve said all along that I want the state to be held harmless. I want to ensure that those 210,000 people who were the beneficiaries of the opt-in and the newly eligibles are covered.”

Sandoval also said he would be in Las Vegas this weekend and had no plans to attend Attorney General Adam Laxalt’s annual Basque Fry, a fundraising event that’s attracted some of the biggest names in the Republican Party but has yet to attract Sandoval during its three years of existence.

On Laxalt, an expected gubernatorial candidate for 2018, Sandoval played coy and said that he would be happy to talk with any candidate for governor but had not had a direct conversation with Laxalt about running for the office, while noting that it was “no secret” that he and Laxalt had at times clashed over the last three years.

“We’ve had our differences, and we’ll see how it goes,” he said.

Sandoval also said he hasn’t been approached by any candidates — including Sandoval ally and state Sen. Scott Hammond — in the state’s 3rd Congressional District about an endorsement. He said Senate Republican leader Michael Roberson hasn’t asked him for an endorsement in his recently announced run for lieutenant governor, but had nothing but praise for the state senator.

“Senator Roberson was a warrior in terms of getting the Commerce Tax passed, and ensuring that what I introduced in 2015 got done, and I’ve had an opportunity to work with him through the years, so I have a lot of admiration and respect for him,” he said. “I think he will make a great candidate and he certainly has the background to serve as lieutenant governor.”

Sandoval also expressed skepticism toward the idea of a 2018 ballot question focused on so-called “sanctuary cities,” saying he would reserve judgement until seeing the ballot language itself but had spoken with Attorney General Jeff Sessions in April and didn’t think Nevada had that problem to worry about.

“I’m not aware of there being any issues in this state associated with sanctuary cities,” he said. “And so I don’t know if the ballot question is needed.”

Other Nevada Republicans, including Roberson and Laxalt, have made opposition to sanctuary cities a major point in their actual or potential 2018 ambitions. Roberson is chairing a political action committee spearheading the ballot initiative, and Laxalt in June filed a brief supporting an executive order punishing sanctuary cities.

The governor also expanded on his reported conversations with Interior Department Secretary Ryan Zinke on Wednesday over a federal national monument review, saying that his office had recommended some minor border adjustments in the national park near the town of Mesquite but was unsure if those recommendations made it into the final report.

“There’s some private water that is within the boundary right now that has complicated things for the city of Mesquite, so we wanted to redraw the boundary to take that into consideration,” he said. “At least in terms of the conversation, he was very receptive to that, but he wasn’t committal on what Interior is going to do.”