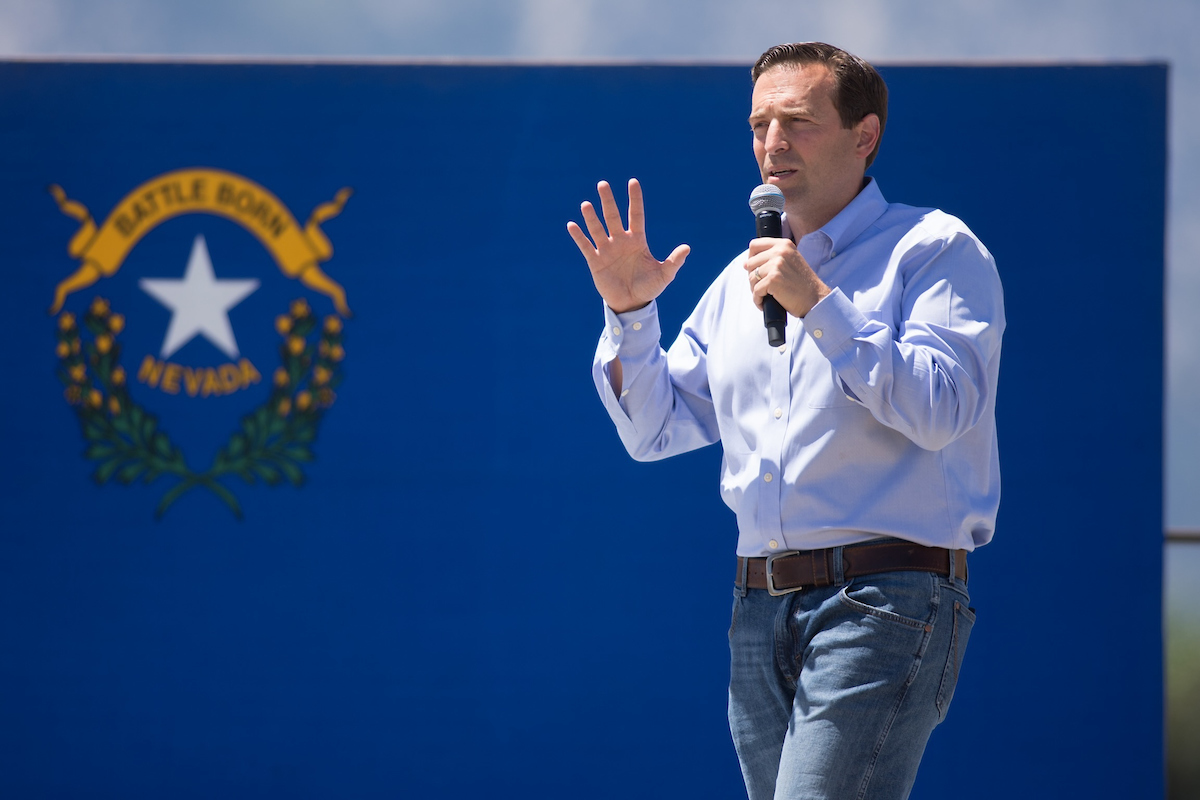 As late as last September, former attorney general and Republican U.S. Senate candidate Adam Laxalt had urged a rural county election official to pursue an audit of the 2020 presidential election results, according to an email from that election official sent at the time.

Douglas County Clerk-Treasurer Amy Burgans told a top state elections official in a September 2021 email that Laxalt had approached her during a local event with a request for the county to audit ballot signatures, saying that “he felt that Douglas County should take the lead.” The email was first obtained in February by the left-leaning watchdog group American Oversight.

Burgans recounted telling Laxalt that the signatures could not be released under state law. Laxalt then, per the email, said he had not heard of such a provision, and declined an offer by Burgans to later receive the relevant statute over email.

“More than anything, I am just letting you know due to the amount of misinformation that is out there,” Burgans told Deputy Secretary of State Mark Wlaschin. “I am sure you are aware of it, but I was baffled as to why he wouldn’t want me to educate him on election laws, especially since he was the former Attorney General!!! [emphasis, Burgans] I believe next year ALL candidates will be running on ‘election integrity’ as a platform without a basic understanding of what the law requires.”

She then ended her email: “And so it begins…”

Though Biden won Nevada by 2.4 percentage points, Trump won all of Nevada’s rural counties, including Douglas County — part of the “quad-county” cluster of rural counties nearest Washoe — where voters broke for Trump nearly 2-to-1, or a margin of more than 10,000 votes.

Laxalt, who served one term as Nevada’s attorney general before losing a bid for governor in 2018, is now running as the Republican nominee for Senate against incumbent Democrat Catherine Cortez Masto. Expected to be among the closest contests in the country this year, the race could be the “51st” seat that decides control of the Senate.

In a statement on Monday, Laxalt spokesperson Brian Freimuth said: "This is absurd. Adam has never had a concern with the integrity of elections in Douglas County."

The timing of Burgans’ email and the event, Douglas County’s Heritage Days, places Laxalt’s request roughly around the release of an audit of county-level Arizona election results on Sept. 24, 2021. It also places the conversation with Burgans roughly five weeks after his official campaign launch last summer.

That much-criticized Arizona audit, conducted by the Republican-linked firm Cyber Ninjas, still confirmed the victory of President Joe Biden. However, it was also later rebutted by Maricopa County election officials in a lengthy report as inaccurate, misleading or misunderstanding of election law.

Still, the high profile of the Arizona audit prompted calls for “Arizona-style” audits in other swing states, including Pennsylvania, Wisconsin and Texas. Election audits in all three states found no evidence of widespread fraud.

Other emails, also obtained in a records request by American Oversight, showed a group of more than two dozen people pushing Douglas County officials for a “forensic audit” of 2020 election results since at least June of 2021. That demand came as part of an “affidavit of maladministration,” which threatened election administrators with $10,000 in fines per day for ignoring the affidavit — though it was unclear how such a penalty would be enforced — and that a denial of the demand was tantamount to “maladministration, treason and insurrection.”

However, those emails do not show that county officials ever seriously considered such an audit, with one email from Douglas County Commissioner Danny Tarkanian noting that there was “no way” Nevada results would be audited while Democrats controlled the state Legislature.

Amid the crush of requests for an audit last year, the secretary of state’s office provided a standardized reply — also obtained by The Nevada Independent — that said in part: “At this point, there is no legal process by which election officials may cause a post-election audit of voting machines and election equipment.”

“Based upon our own review of voting machines and election processes and protocols, we are certain that Nevada’s voting machines were not sabotaged or otherwise compromised by election workers, foreign actors, or anyone else,” the letter said.

In the run-up to and immediately following the 2020 presidential election, Laxalt — then the Trump campaign co-chair in the state — was among the most front-facing Trump officials challenging Nevada’s election results.

In a press conference two days after Election Day in 2020, Laxalt and other Trump allies alleged that “illegal votes” had been cast, including from voters who were deceased. However, it was ultimately a Republican man and vocal critic of the state’s election laws, Donald Kirk Hartle, who was charged with voting with his deceased wife’s ballot.

Later, Laxalt spearheaded a lawsuit in state court alleging that Secretary of State Barbara Cegavske’s office failed to keep non-citizens off Nevada voter rolls. That lawsuit was eventually dismissed, and an investigation into broader fraud claims lodged against Cegavske, also a Republican, found no “evidentiary support” of widespread voter fraud in the 2020 election.

Still, Laxalt has continued to cast doubt on the election, and has long positioned “election integrity” as a critical campaign issue. In 2021, he told conservative news outlets that 2020 challenges had failed in the courts in large part because they were filed too late, and that his team would be ready to execute challenges in 2022 early to “try to tighten up the election,” according to the Associated Press.

In campaign events this year, Laxalt has walked a finer line, most often decrying the legal changes made to Nevada’s election system by state Democrats in the wake of the pandemic — especially the implementation of universal mail-in ballots — rather than machine-based election conspiracies espoused by some other Republican candidates.

Correction - 8/30/22 at 8:19 a.m. — An earlier version of this story incorrectly identified the Douglas County clerk-treasurer as Amy Bergans, rather than Amy Burgans.