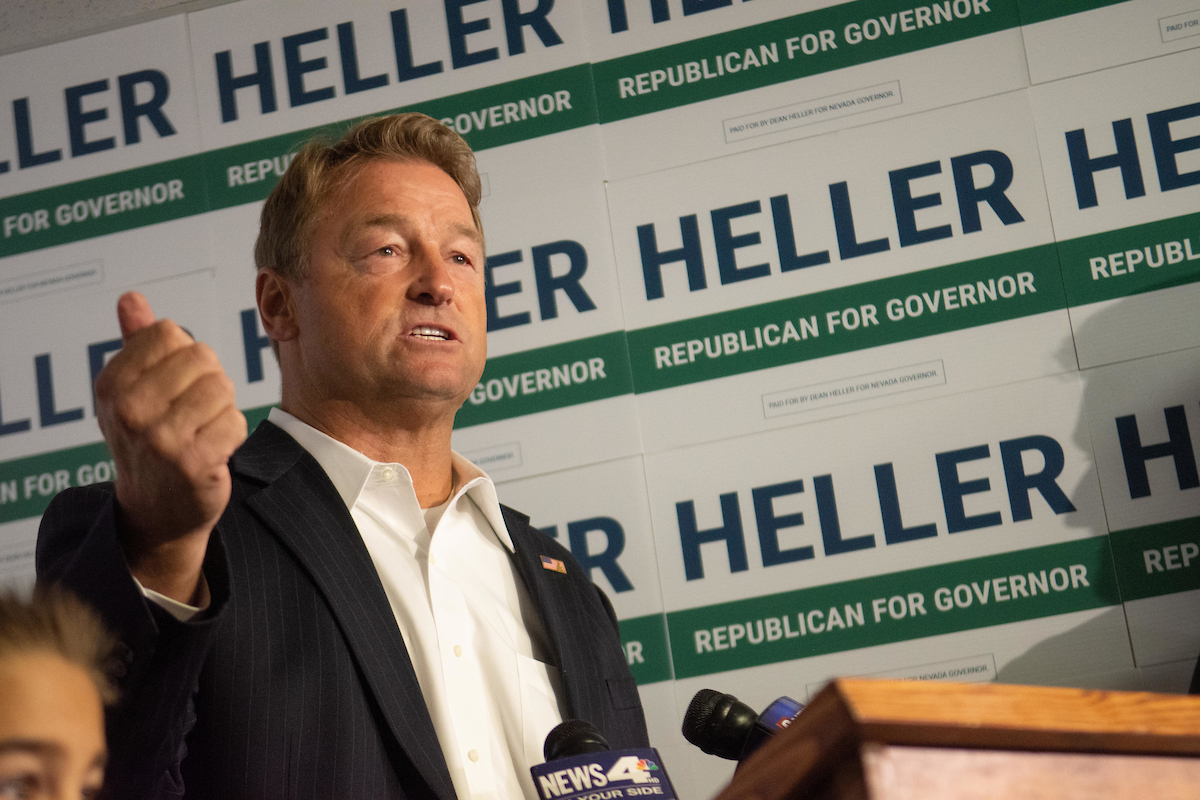 Former U.S. Sen. Dean Heller drew a line in the sand between himself and fellow Republican gubernatorial candidate Clark County Sheriff Joe Lombardo Thursday evening, referring to Lombardo as a “liberal” and expressing support for allowing Nevadans to carry weapons without a permit, a policy the sheriff opposes.

Heller took a hardline stance on firearms, taxes and election reform during an hour-long Zoom question-and-answer session with members of the Nevada Firearms Coalition, the state affiliate of the National Rifle Association in an effort to bolster his conservative bonafides. Moderator Randi Thompson, the association’s lobbyist, noted during the event that conservatives have, in recent years, viewed Heller as somewhat of a RINO, or Republican in Name Only.

“People who say that, I think, are misguided. I am a very affable person. I’m not a bomb thrower, and some people think that only conservatives throw bombs and I disagree with that,” Heller said. “I passed over 100 pieces of legislation when I was in Congress and I didn’t do that because I upset everybody every opportunity I got. I did that by working with people.”

During the wide-ranging interview discussing topics from guns to taxes to school choice, Heller reiterated his belief that he is the only proven conservative running for office — a talking point he pushed during his campaign launch in September.

He also sought to position himself as the strongest candidate to take on Gov. Steve Sisolak in the general election in 2022. A poll conducted by The Mellman Group for The Nevada Independent showed Sisolak beating Heller by a 2.5 percentage point margin in a head-to-head match up, compared to a 0.5 percentage point lead for the governor over Lombardo, numbers that fell well within the margin of error.

Below are some of the highlights from the forum.

Heller stressed his support for a policy known as “constitutional carry,” the ability to concealed carry weapons without a permit, and for no limits on high-capacity magazines. Both policies stand in stark contrast to Lombardo’s more moderate stances discussed in the same forum almost four months prior.

During the June forum, the sheriff shared his support of universal background checks and limits on certain high-capacity magazines. Both Heller and Lombardo spoke against several gun control measures passed during the last legislative sessions, including the state’s ‘Red Flag’ law and a measure banning so-called “ghost guns,” which are homemade firearms without serial numbers.

In a response about preserving Second Amendment rights, Heller noted that in the aftermath of the shooting on October 1 in Las Vegas, “the first thing the media wants to talk about is what gun controls should be enacted.” The event was terrible, but the solution was not gun control, Heller said.

“My response was that we're not going to water down the Second Amendment because some lunatic decided to get up on the 30th floor and shoot down a bunch of concert-goers,” Heller said. “That's not me and that's not what I will support.”

Though Heller acknowledged officials on both sides of the aisle support gun control measures, he said lawmakers are either “adamantly pro-Second Amendment” or “you radically want to water it down.” He added that mental health problems are real but said he doesn’t believe that means lawmakers should make changes to the Constitution.

Heller reiterated one of his promises to issue an executive order that would require every voter to show identification at the ballot box, as well as his belief that laws passed during the 2021 legislative session “made it easier to cheat.” He promised to reverse those laws, which include making widespread distribution of mail-in ballots permanent and expanding automatic voter registration, falsely asserting that those laws were enacted via executive order.

In March 2020, Secretary of State Barbara Cegavske, a Republican, announced the state was effectively canceling in-person voting and moving the state’s June primary election to mail ballots as a result of the COVID-19 pandemic. For the general election, the state followed legislation passed by lawmakers during a special legislative session creating new rules for elections conducted under state of emergencies or declaration of disaster.

Many of those pandemic-related election changes were made permanent through legislation passed during the Legislature’s regular 2021 session and signed into law by Sisolak.

It is unclear whether the governor could enact a voter ID law by executive order.

Heller promised that as governor, he would repeal the Commerce Tax, which he described as “onerous,” “dumb” and cost-ineffective. The tax, which is levied on businesses that gross more than $4 million annually, was championed by then-Republican Gov. Brian Sandoval as part of a tax package to fund education passed by the Legislature in 2015.

The policy, however, is reviled by conservatives who saw its passage as a reversal after voters rejected a margins tax on the 2014 ballot.

“When it comes to taxes, the worst tax we’ve implemented in the last five years has been the Commerce Tax,” Heller said. “I’ll make this promise: When governor, and I submit my first budget to the Legislature, it will not include the Commerce Tax.”

Heller pitched the repeal of the tax as a way to reduce the burden on businesses and added that the state needs to make it easier for entrepreneurs to establish businesses in Nevada and thrive here.

“If you're in California and you want to get out of that state, and I don't blame you, you're not coming to Nevada because of dumb taxes like that,” said Heller, who was born in California, raised in Carson City and went to college at USC. “We need to make it easier for businesses to license. We need it easier for doctors and nurses to license, we need to make sure that we have a regulatory system that actually works with these small businesses.”

In addition to easing the burden on small businesses, Heller said high schools should offer vocational training, from welding to woodwork, so that individuals who may not want to attend college have a skillset with which they can earn money. He added that attending a liberal college and graduating with thousands of dollars in debt does not make sense today.

As for Heller’s defeat by then-Rep. Jacky Rosen in a 2018 re-election campaign that found him struggling to navigate a tense relationship with then-President Donald Trump, Heller said that if Trump runs for office again, he would vote for the former president and believes that Nevadans are looking for someone to protect conservative values.

“It’s all a tough race, but I think I have what Nevada needs right now,” Heller said, adding that Nevadans want jobs, safe neighborhoods and excellent schools. “I'm going to continue to push my conservative values for this group .. and support the Second Amendment. And those issues simply are going to be what makes a difference in this race.”