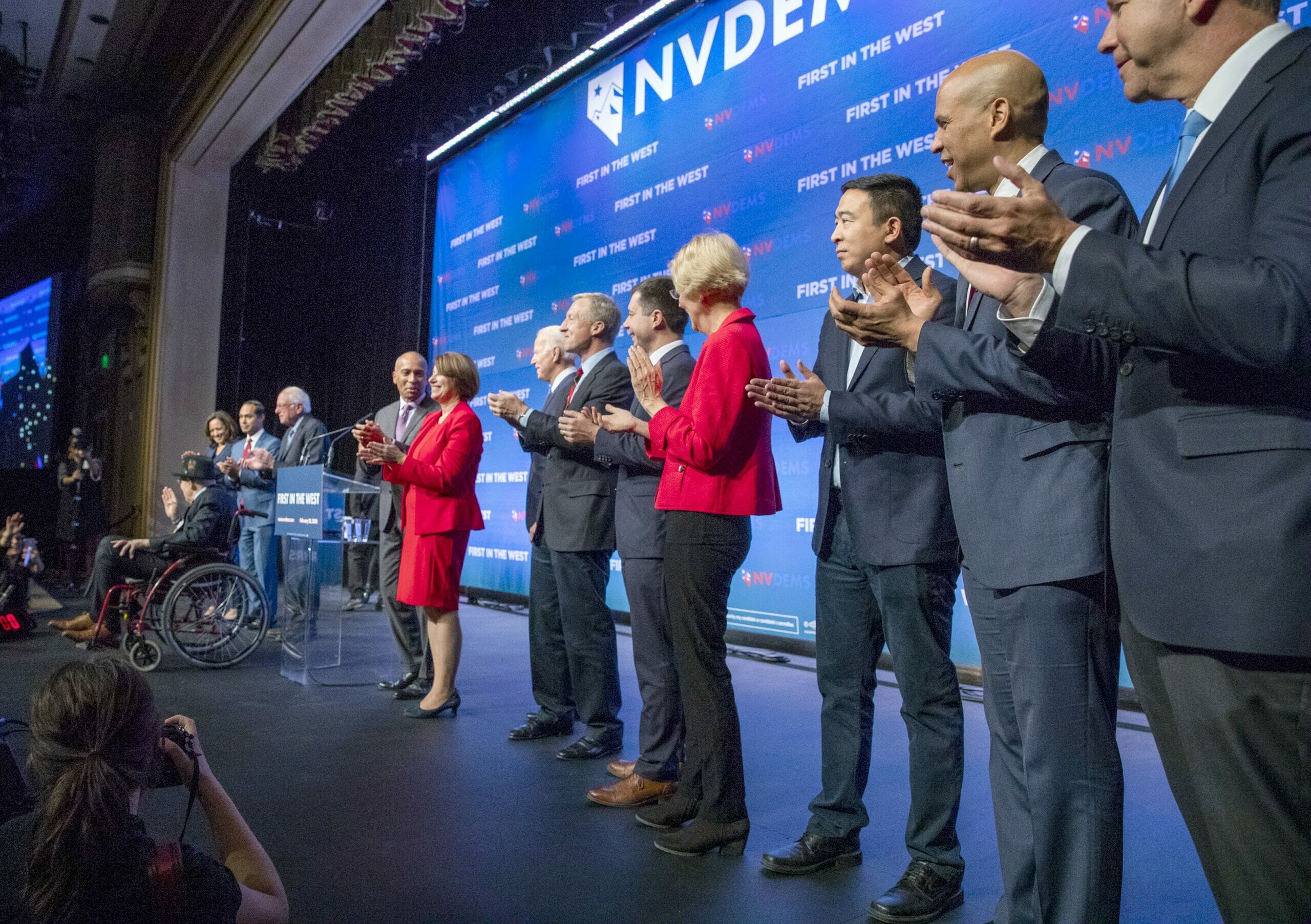 With temperatures dropping, rain in Las Vegas, snow up north, the twinkle lights, that hum of excitement in the air, it’s beginning to look a lot like... the caucuses. (Didn’t say those twinkle lights were on trees, did I?)

Sing it with me: “Caucus time is here, happiness and cheer. Fun for all that campaigns call, their favorite time of year.”

Happiness. Cheer. Fun. I know, I kid. But it does feel like we’ve entered a new phase of the campaign since the last newsletter. We crossed the 100 days out threshold two weeks ago, and are now 88 days away from Nevada’s Democratic caucuses. Almost all the Democratic presidential hopefuls were in town recently for the Nevada State Democratic Party’s First-In-The-West Event, where a rainbow of campaign supporters (in “Heartland Yellow” t-shirts for Mayor Pete and “Liberty Green” for Warren) packed the room and the thrum of thundersticks filled the air. Team Kamala even brought a drum line and Team Biden a marching band. It was, dare I say, a festive occasion.

But, with an actual holiday upon us, let’s get to the actual newsletter.

As always, a reminder to reach out to me with any tips, story ideas, comments, suggestions, and your favorite holiday song at [email protected]. (I know, I couldn’t even wait until after Thanksgiving to start the Christmas music, and I put my tree up last week.)

Titus endorses Biden: The big news Monday morning was that Rep. Dina Titus is backing former Vice President Joe Biden for president. She's the first major elected official in the state to come out in support of Biden.

One interesting highlight of her statement in support of Biden: "I am a proud progressive champion and I believe that nominating Joe Biden gives us the best chance to enact the progressive reforms that our country desperately needs."

You can read more about her endorsement here.

Biden and pot: Biden’s position against legalizing recreational marijuana on the federal level has been quite the story over the last couple of weeks.

His position isn't new. He's talked about it before, including in an interview with me in July. He told me that he wouldn’t, as president, restrict state decisions to legalize marijuana recreationally, but that he would not legalize it on the federal level without further research.

I even pressed him on why the decision should be left up to the states when studies have shown that people of color are disproportionately incarcerated for marijuana-related offenses. He told me that it’s a “state law” and tried to argue, essentially, that the federal government was powerless in the matter.

“The federal government cannot impose state law. You can’t come, in the federal government, and say that this is what you do,” Biden told me. “What you do is you hold accountable those departments and those agencies which in fact do not in fact enforce the law equally.”

The former vice president’s position on the issue came into the national spotlight, however, after he was asked whether his position on recreational marijuana has changed at a town hall-style event before Nevada State Democratic Party’s First-In-The-West Event two weekends ago. Biden said it hasn’t, and that there "hasn't been enough evidence that has been acquired as to whether or not (pot) is a gateway drug." (It was the use of the phrase “gateway drug,” reminiscent of the “Just Say No” campaign of the ‘80s and ‘90s, that earned Biden the most criticism.)

Then all of that led to a moment of incredulity from New Jersey Sen. Cory Booker over Biden’s position on marijuana on the debate stage last week. (Remember, most Democratic presidential candidates do support legalizing marijuana on the federal level.)

“This week, I hear him literally say that I don’t think we should legalize marijuana,” Booker said, turning to Biden. “I thought you might have been high when you said it.”

Finally, on a press call with Biden on Monday, I asked the former vice president whether he was wrong to suggest marijuana might be a gateway drug.

"I don't think it is a gateway drug," he said. "There's no evidence I've seen that suggests that."

Marijuana policy is not likely to be a make or break issue in the campaign, but Biden’s position against legalization is one distinct difference between him and not only his progressive competitors in the race — Vermont Sen. Bernie Sanders and Massachusetts Sen. Elizabeth Warren — but also the moderates who are gunning for his supporters, including South Bend Mayor Pete Buttigieg and Minnesota Sen. Amy Klobuchar.

Klobuchar staffs up in Nevada: Nine months into her presidential campaign, Klobuchar has finally hired staff in Nevada. She’s brought two members of former Rep. Beto O’Rourke’s presidential team here in Nevada: Marina Negroponte will be state director and C.H. Miller will be political director. It’ll be interesting to see how her campaign ramps up here as she plays catch up over the next couple of months.

Delegate selection: On a press call Monday morning, Nevada State Democratic Party Chair Will McCurdy announced that the party's delegate selection plan has officially been approved by the Democratic National Committee. The plan includes major changes to the caucus process, including four days of in-person early voting and offering presidential preference cards in Tagalog. It also includes provisions continuing the practice of offering at-large caucus sites on the Strip to make it easier for casino workers to participate.

On the call, DNC Chair Tom Perez projected "record turnout" in Nevada's upcoming caucuses because of the changes the party has put forward. (In 2008, roughly 118,000 Democrats, or 27 percent, participated in the caucus, compared to only about 84,000 people, or 17 percent, in 2016.)

You can read the most current version of the party's delegate selection plan here. One interesting detail: Participants will be required to choose at least three candidates, in order of preference, and no more than five when early voting. This is because caucusgoers' early votes will flow back to their home precincts and be counted as if they were actually voting in-person on Caucus Day with their neighbors. If there isn't enough support for a given candidate at that precinct to be considered "viable" in the caucus process, caucusgoers will be given an opportunity to realign in favor of a second (or third or fourth or fifth) choice candidate — which is why having those backup choices will be important, since caucusgoers who early voted will not actually be there in person to take part in that realignment process.

First in the West: I don’t know that any hearts or minds were changed at the Nevada State Democratic Party’s big event two weekends ago. But it was a good opportunity to see the candidates whittle their stump speeches to 10 minutes and give them in rapid fire succession. Warren talked about “big, structural change” and Sanders talked about a “political revolution,” while Biden warned that Democrats have to be “real careful about who we nominate, because the risk of nominating someone who wouldn’t beat Trump is a nation and a world our children and our grandkids won’t want to live in.” I was there, as was my colleague Jackie Valley.

Latinos for Trump: I went to a Latinos for Trump event a couple of weeks ago at the East Las Vegas Community Center, where Second Lady Karen Pence was speaking. A fairly diverse crowd showed up to the event, which highlighted the kind of pitch that the Trump campaign will be making to Latinos. Part of it is economics (including record low Hispanic unemployment), and part of it is religion (Pence talked about faith-based providers in foster care and adoption, as well as abortion.)

“The power you have as Latinos, this room could be the difference,” Pence told the group.

Pete on the radio: Some news for you first in the Indy — Buttigieg’s campaign started running ads on Thursday on urban contemporary radio stations in Las Vegas. His campaign, which did not specify the size of the buy, said that this is the first radio ad of the campaign in Nevada, and that they plan to expand the buy to include more stations across the state in the coming weeks, including Spanish music and talk stations.

Presidential candidates spend campaign cash in Nevada: Stays at the Bellagio. Catering from Lotus of Siam. Democratic presidential hopefuls spent more than $2.1 million in Nevada in the first nine months of the year. I combed through the campaign finance reports so you don't have to.

Harris on the pod: California Sen. Kamala Harris joined me on the podcast last week to talk about an array of issues — from internal campaign dynamics to Medicare-for-all. She told me that, despite her low polling numbers in Nevada and nationally, she is still “very much in the game.” On her Medicare-for-all plan, which retains a role for private insurers, she insisted that “everybody’s going to have to have to compete, and, you know, the beauty of competition is that the best will rise.”

She also told me that she’d like to see uniform federal regulations on marijuana instead of leaving it up to individual states to regulate it. Read the full interview here, but if you want to hear her favorite movie with a scene in Nevada or what casino game she’d be, you’ll have to listen to the full podcast here.

Reid not ruling anyone out yet: Former Democratic Senate Leader Harry Reid, talking with reporters before the First-In-The West Event, said he wasn’t ruling any presidential hopefuls out yet — even those getting into the race late in the game.

“I think it’s way too early to start crossing people off the list,” he said.

He also rejected the notion that any of the candidates are too liberal for Nevada.

“You can go back many, many decades. It’s always the same argument,” he said. “So, obviously, people are looking for reasons why people are doing better or worse in any given week. I think that it’s now very fluid who’s going to be our nominee.”

Full details of that conversation here.

First-In-The-West sponsors: Many Democratic presidential campaigns sponsored the Nevada State Democratic Party’s big event. Others did not. I took a look at all of that — and whether it means anything — here.

Indy Video on weekend of campaigning: Videographer Jana Sayson traveled around Las Vegas to many of the candidate events scheduled around the First-In-The-West event, including town halls hosted by Biden, Warren and Sanders and a “Westside Pride” Black Community Summit, which was put on by Rep. Steven Horsford and attended by former House and Urban Development Secretary Julián Castro, Harris and Warren. Check out the video she put together here.

Stop the Madness comes to the Strip: The Republicans took their anti-impeachment “Stop the Madness” campaign to a digital billboard truck the night of the Democratic event.

Lee defends impeachment inquiry at town hall: Lee told a crowd at a Las Vegas town hall this weekend that she was upholding her oath to the U.S. Constitution when she voted in support of an impeachment inquiry into President Donald Trump. (Roughly a dozen pro-Trump demonstrators tried to heckle her at the event.) My colleague Jacob Solis has more.