His termination in limbo, Jara acknowledges missteps while defending other decisions 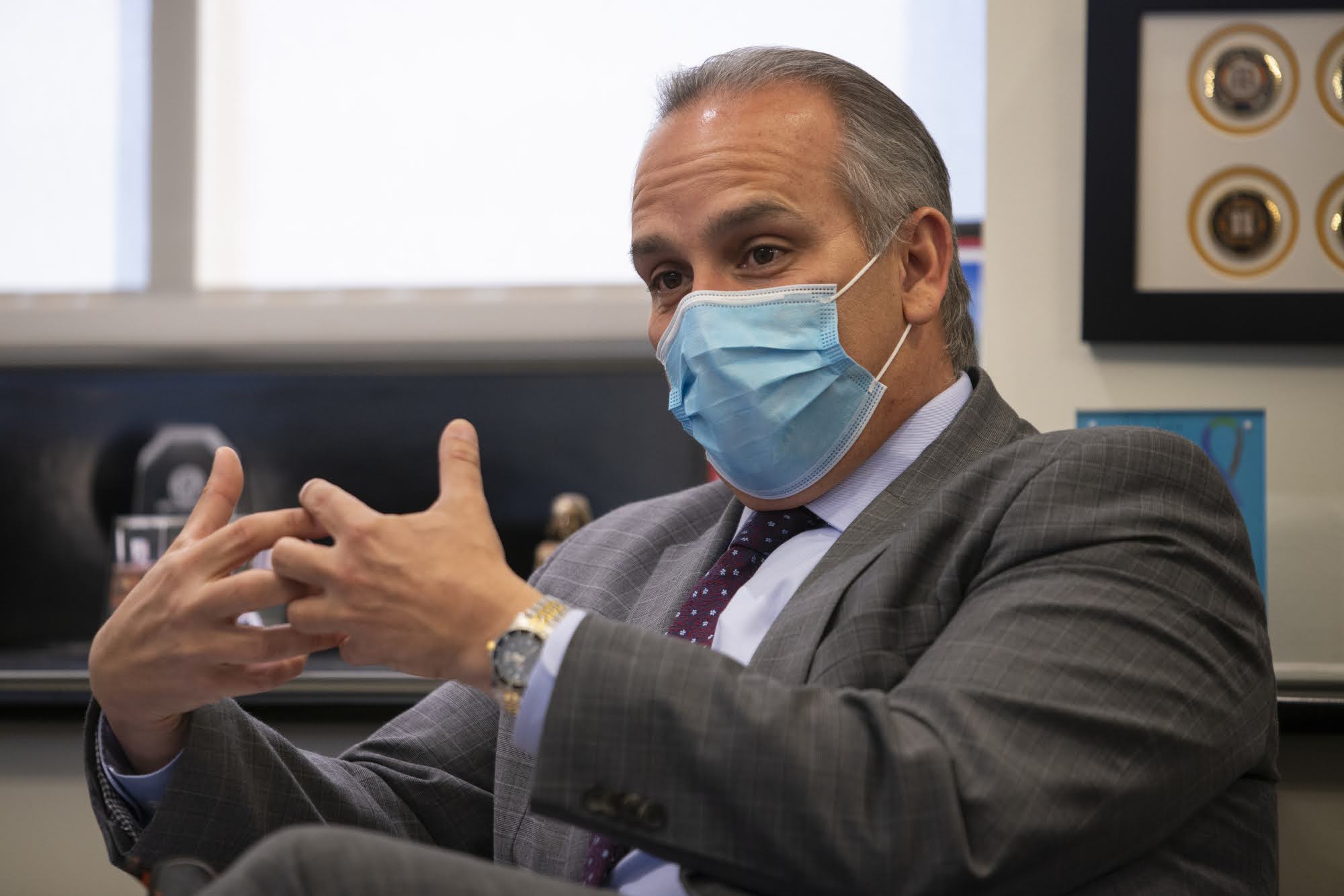 Potentially days away from the end of his three-year tenure leading the Clark County School District, Superintendent Jesus Jara rebuffed accusations of a polarizing, top-down management style while acknowledging a failure to forge unity during a divisive time in the school district’s history.

“I hope we can put all our differences aside on behalf of children,” he told The Nevada Independent during a wide-ranging interview on Monday. “And I guess that would be my biggest regret — that I wasn’t able to bring everybody together.”

The interview comes more than two weeks after the Clark County School Board of Trustees terminated his employment in a split vote Oct. 28. Now, he’s a leader in limbo: The board is expected to reconsider its termination decision Thursday.

Trustee Irene Cepeda, who cast the swing vote severing his contract, and two fellow board members — Lola Brooks and Evelyn Garcia Morales — have requested an agenda item that would pave the way for a possible reversal of the board’s original decision.  But as it stands now, his departure date is two weeks away — Dec. 1.

The majority of the board must agree to a reconsideration vote before proceeding. And even if the board undoes his termination, it’s unclear whether Jara would stay. For now, his plans remain under wraps.

“The board has the decision to make,” he said. “I’ve been committed to this community since I got here from day one because I see the potential, but I can’t speculate on what the board is going to do.”

The fractured board terminated his employment for convenience, meaning trustees did not have to cite a particular reason for doing so. But the move — brought forward by Trustees Linda Cavazos, Danielle Ford and Lisa Guzman — wasn’t entirely out of left field.

Cavazos and Ford had initiated a similar request that fizzled out in July 2020. Earlier this year, the board extended Jara’s contract through Jan. 15, 2023, with opposition votes from Cavazos, Ford and Guzman, indicating ongoing tensions between several trustees and the superintendent that appeared to worsen over time.

It also exposed a deepening rift on the board, as trustees battled over governing approaches and support or opposition for Jara.

Though trustees have not entirely articulated reasons underpinning the recent termination vote, Jara has faced criticism from a broader audience than just trustees, including employees, parents and community interest groups. The complaints have been about communication problems, decisions related to COVID-19, ongoing operational difficulties and staffing shortages, a dictatorial management style and overall low morale among staff, some of whom have expressed fear of retaliation if they speak out.

Jara, meanwhile, has accused Cavazos, Ford and Guzman of creating a “severe and pervasive hostile work environment,” according to a letter his attorney sent to Board Counsel Mary-Anne Miller on Nov. 5. The letter also requested $2 million on top of the $657,131 owed under his contract terms to avoid litigation.

Last week, Cavazos said she was “mystified” and “caught off guard” by the contents of the letter and monetary request.

Jara did not elaborate on the hostile work environment allegation aside from saying, “If you read some of the comments from the board, other board members, it speaks for itself.”

He also defended the payout request, calling it a figure he and his lawyer determined to be “fair.”

But the embattled superintendent said uproar over certain operational decisions, such as diverting Title 1 funding to the neediest schools and cutting dean positions, point to “micromanaging” tendencies by some board members. It reached a level, he said, where some trustees wanted to vet press releases or statements before they were sent to the public.

“Their role is to provide a vision, to set goals and set targets and provide the fiduciary support and governance and accountability — not to manage the district,” he said. “My job is to make sure that I manage.”

His tenure as superintendent hasn’t been without communication blunders, though. A video message announcing the elimination of dean positions angered employees, and, a year later, the superintendent found himself in a brouhaha with Gov. Steve Sisolak and state Superintendent Jhone Ebert over a controversial piece of legislation that would have allowed the school district to sweep back unspent dollars from individual schools.

At the time, the governor accused Jara of trying to “mislead the communities he represents and blame others in order to avoid the repercussions of his poor decisions.”

Jara said he and the governor now have a “great working relationship,” but acknowledged his management of the situation was a misstep.

But the superintendent didn’t make amends or express regret for every controversial act.

For instance, Jara stood by his decision to significantly increase salaries for members of his executive cabinet, which occurred days after they signed a letter throwing their support behind him ahead of the Oct. 28 board meeting. The move didn’t sit well with several trustees and members of the public, some of whom took their discontent to social media.

Ford previously told The Nevada Independent she was “infuriated” by the timing of the raises, given that they happened on the heels of Jara’s termination vote, when many of the same cabinet members walked out of the board meeting before business matters had been completed.

Jara said the board had been involved in discussions about the compensation increases for months. He described it as a “right-size” pay increase that would aid in recruitment and retention efforts, noting that it took eight months to hire a new chief communications officer and that all employee bargaining units received raises as well.

Even so, the executive pay increases ranged from 5 percent to 28 percent, in some cases placing them well above the 3 percent pay raises given to teachers this year.

Jara said he knows teachers are “tired” and “frustrated” from the extra burdens placed on them during the pandemic. He cited use of federal funding to purchase better instructional materials as one attempt to lighten their workload.

The district is "hurting just like everybody else in the nation," he said, when it comes to hiring. More than a quarter into the school year, the district still has more than 700 teaching vacancies, not to mention other difficult-to-fill but critical positions, such as bus drivers. Jara said the Teacher Recruitment and Retention Commission he formed last year meets again Wednesday.

As for employees’ concerns about not being heard or being afraid to speak up, Jara pointed to an anonymous reporting portal called EthicsPoint Incident Management System as a tool to gather more feedback, though he said its use so far has been low.

The superintendent also defended his decision this year to implement principal improvement plans, which he described as supportive rather than punitive, during an already chaotic time in education.

“Our kids can’t wait,” he said, echoing a sentiment he expressed even before the pandemic upended education delivery models.

Ultimately, accountability for student success falls at the door of the superintendent, and the COVID-19 pandemic certainly didn’t help Jara’s quest to dramatically improve academic outcomes.

Statewide standardized test scores from the spring show a precipitous drop in Nevada students’ math and reading skills compared with the 2018-2019 school year. The Clark County School District operated in distance-education mode for much of the 2020-2021 school before gradually bringing back students in the spring.

Jara said the board will consider approving a multi-tiered systems of support (MTSS) policy, and the district will be launching a literacy plan, too. The board agenda item for the MTSS policy describes it as a “data-informed problem-solving process to ensure continuous school improvement by matching multiple tiers of instruction and intervention to meet the needs of every student.”

Jara, however, has encountered pushback for appearing to flout the state-mandated reorganization law known as AB469, which was supposed to give principals and school communities more decision-making autonomy in a bid to boost student achievement. The theory was that principals and school communities better know the needs of their students and what it will take to make them succeed.

Critics say his top-down leadership style doesn’t mesh with that law. Jara contends the large district needs coherent curriculum, professional development and assessment practices, especially given the student transiency rate. About 19 percent of Clark County students do not finish the academic year in the same school where they started it.

“There some things that ... should be standardized,” he said. “I stand by them because the research calls for that.”

In the end, Jara’s legacy as superintendent may boil down to a question dividing trustees and community members alike: Is he a headstrong leader, incapable or unwilling to accept direction, or a disrupter fighting a system resistant to change?

“I’m never going to apologize for my drive for our kids,” Jara said. “I want the parents in this community to know that I lost many nights of sleep because I felt like in some cases the system wasn’t doing enough.”