Supreme Court: Ranked-choice voting can go to ballot, but not tax petitions, vouchers 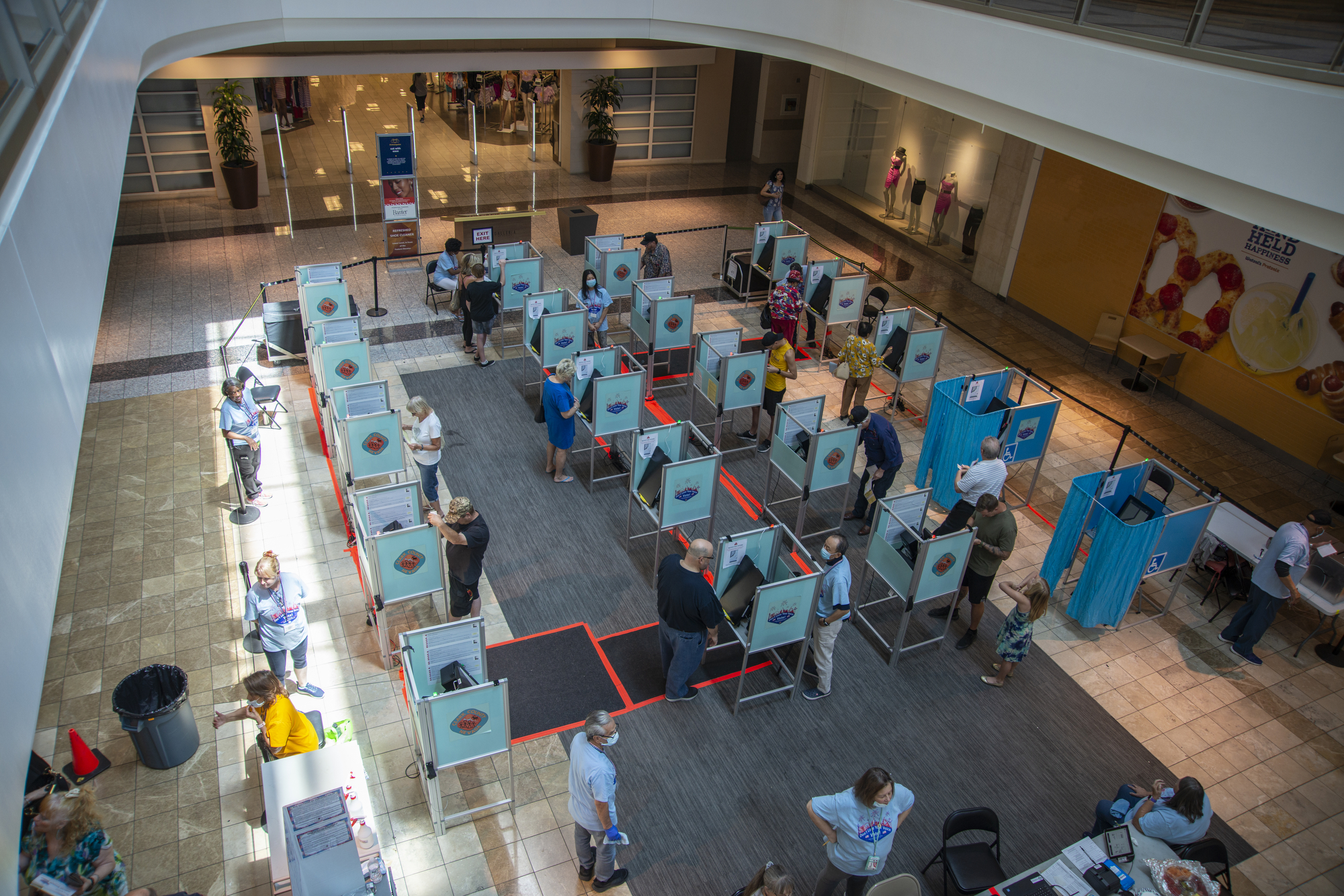 The court also ruled that a pair of ballot initiatives seeking to raise taxes and backed by the Clark County teachers union can be withdrawn from the 2022 ballot. The decision by the justices went against the position of Secretary of State Barbara Cegavske that the initiatives could not be withdrawn even after the union and Legislature reached a compromise to raise a tax on mining instead of taking the matter to the voters.

The rulings arrived just before a statutory June 29 deadline for groups to submit the necessary signatures to qualify an initiative for the November general election ballot.

Aftershocks of the rulings will be felt on the 2022 ballot and beyond. The tax initiatives proposed by the unions had the potential to raise up to $1 billion of new tax revenue annually, while the voucher-style education programs held the potential to upend the state’s system for funding education.

If approved by a majority of voters in 2022 and 2024, the voting initiative would overhaul elections in the state, opening primaries to all voters regardless of party registration and providing voters with an opportunity to rank multiple candidates by preference during general elections. The initiative still faces staunch opposition from prominent Nevada Democrats, including Gov. Steve Sisolak.

The Nevada Supreme Court ruled in favor of Nevada Voters First, allowing the ranked-choice voting initiative to proceed to the ballot and shutting down Democrats’ legal opposition to the measure.

That 4-3 ruling backs up a lower court ruling from January, in which Carson City District Court Judge James Wilson rejected three claims raised against the initiative. Wilson concluded that changes to both primary and general elections did not violate a rule that ballot initiatives must focus on a single subject.

Proponents of the initiative argued the changes would empower Nevada’s growing share of nonpartisan voters, who make up nearly a third of the state’s registered voters and are unable to vote for partisan offices in primary elections.

In the majority opinion written by Justice Douglas Herndon, the court determined the initiative did not violate the single-subject rule as long as its provisions were “functionally related and germane to each other.” He said claims of logrolling — including a less popular, unrelated provision unlikely to pass by itself with a more popular idea or provision — fell short in persuading the justices, as plaintiffs were unable to point to which of the two provisions “is the primary, and thus, the more popular, change proposed.”

“[T]he changes are necessarily connected and pertaining to each other and to the subject of how specified officeholders are presented to voters and elected,” the opinion states.

Herndon disagreed with concerns that the initiative's 200-word description of effect included on signature petition forms had “briefly, but clearly and nonargumentatively” summarized how the initiative would change the state’s election system.

Three justices — Elissa Cadish, James Hardesty and Lidia Stiglich — dissented, saying they believed the initiative violated the single-subject rule and had a faulty description of effect.

The effort has been spearheaded by the Institute for Political Innovation, a nonprofit founded last year by Katherine M. Gehl, an author, philanthropist and former CEO of a Wisconsin-based high-tech food-manufacturing company.

Since November, Democrats have mounted opposition to the initiative, including via a legal challenge filed by Nathan Helton, a Democratic Party-aligned Churchill County voter, who was represented in the case by attorneys well known for representing Democratic candidates and causes in court, including Bradley Schrager and Marc Elias.

High-profile Democratic politicians in Nevada, including Sisolak and Sens. Jacky Rosen and Catherine Cortez Masto, have also voiced their opposition to ranked-choice voting. In May, they joined the “Let Nevadans Vote” coalition in decrying the proposed voting changes as overly confusing and time-consuming.

In a statement, a spokesman for Nevada Voters First said the organization was "thrilled" with the court's decision and that it would ensure "a robust conversation over the coming months about our outdated election system."

"We believe this is a victory for all Nevadans as it will allow voters the opportunity to have more choice and more voice in the electoral process," the statement read.

Following the court’s rulings Tuesday, two teacher union-backed ballot initiatives seeking to raise the sales and gaming tax will not be on the 2022 ballot.

The two measures, sponsored by the Clark County Education Association (CCEA), initially qualified for the ballot in 2020 and would have raised an estimated $1 billion annually in new taxes for school funding.

But after the union reached a compromise with lawmakers in the 2021 legislative session to send more mining tax revenue toward K-12 education, the CCEA asked Cegavske, whose office is charged with overseeing elections, to withdraw the petitions from the 2022 ballot.

Cegavske refused, saying the language of the state Constitution prevented her from removing the ballot questions. That led the union to file a lawsuit against her last year to remove the petitions from the ballot. A district court judge in Carson City ruled in favor of the union in March.

Nevada Supreme Court justices handed down a 4-3 decision on Tuesday upholding the lower court’s ruling, allowing the petitions to be withdrawn. The majority, led by Stiglitch, wrote that the Constitution allows the Legislature to “facilitate the operation” of the people’s initiative power, and that allowing sponsors to withdraw their proposals in response to changing circumstances is part of that legislative duty.

The majority did rule that the lower court’s writ of prohibition telling Cegavske not to put the matter on the ballot was unnecessary.

In a dissent, three justices led by Justice James Hardesty argued that allowing withdrawal adds an extra step into the ballot measure process outlined in the Constitution and obstructs, rather than facilitates, the exercise of initiative power.

CCEA Executive Director John Vellardita said he wasn't surprised the court allowed the withdrawal, although he expected the decision to be unanimous. He noted that no voters who signed the petition were a party to the lawsuit or had been asking for the measures to proceed to the ballot.

The new mining tax passed in the 2021 legislative session raises considerably less money than  proposed sales and gaming tax increases. The tax on gold and silver brings in about $130 million to $150 million a year.

The Nevada Supreme Court’s third ruling dashed a political action committee’s hope to create a voucher-style education program by upholding a lower court determination that the proposed initiative would create an unfunded mandate.

In January, Education Freedom for Nevada — a PAC chaired by Erin Phillips, who serves as president of the advocacy organization Power2Parent — filed a statutory and constitutional initiative with the secretary of state’s office. The goal: Revive a form of education savings accounts, which allow parents to use state funding to pay for their children’s educational services outside of the public school system.

For years, voucher-style programs have been mired in controversy in Nevada — and this one was no exception.

Beverly Rogers and Rory Reid of the public education-oriented Rogers Foundation quickly filed lawsuits to prevent the so-called education freedom accounts from becoming a reality. They described the PAC’s attempt as a “voucher scheme that hurts public schools, promotes discrimination and ignores accountability.”

A Carson City senior judge in April struck down both initiative attempts, saying they could create massive unfunded mandates. Education Freedom for Nevada appealed the lower court’s decision for the constitutional initiative, which would amend the Nevada Constitution.

But in a 5-2 vote, the high court agreed with the lower court’s decision that it does not comply with constitutional requirements related to unfunded mandates. Justices Cadish, Ron Parraguirre, Abbi Silver and Stiglich concurred with Hardesty, who wrote the majority opinion.

An attorney for the PAC had argued that the constitutional initiative didn’t need to comply with the funding provision because it only proposed a constitutional change. The Supreme Court disagreed.

“Initiative proponents cannot be permitted to create a hole in the state’s budget merely because they proposed changes via constitutional amendment, rather than statutory amendment,” the opinion states.

The Supreme Court also found the initiative’s description of effect — a 200-word description included on signature forms — to be “misleading” about the state budget effects.

“The inevitable ramification of this initiative is either an increase in taxes or a reduction in public school funding or other government services, and the description of effect’s failure to address this substantial impact is a material omission,” the opinion states.

Herndon and Kristina Pickering dissented in part, disagreeing with the interpretation regarding the description of effect and the constitutional amendment.

Per the high court’s ruling, the initiative is void and cannot proceed.

“It’s clear this group was trying to push its controversial scheme by deceptively mischaracterizing its impact on our public schools," Reid said in a statement after the ruling. "Nevada's highest court has halted their effort, rightly finding the public deserved to know the full truth."