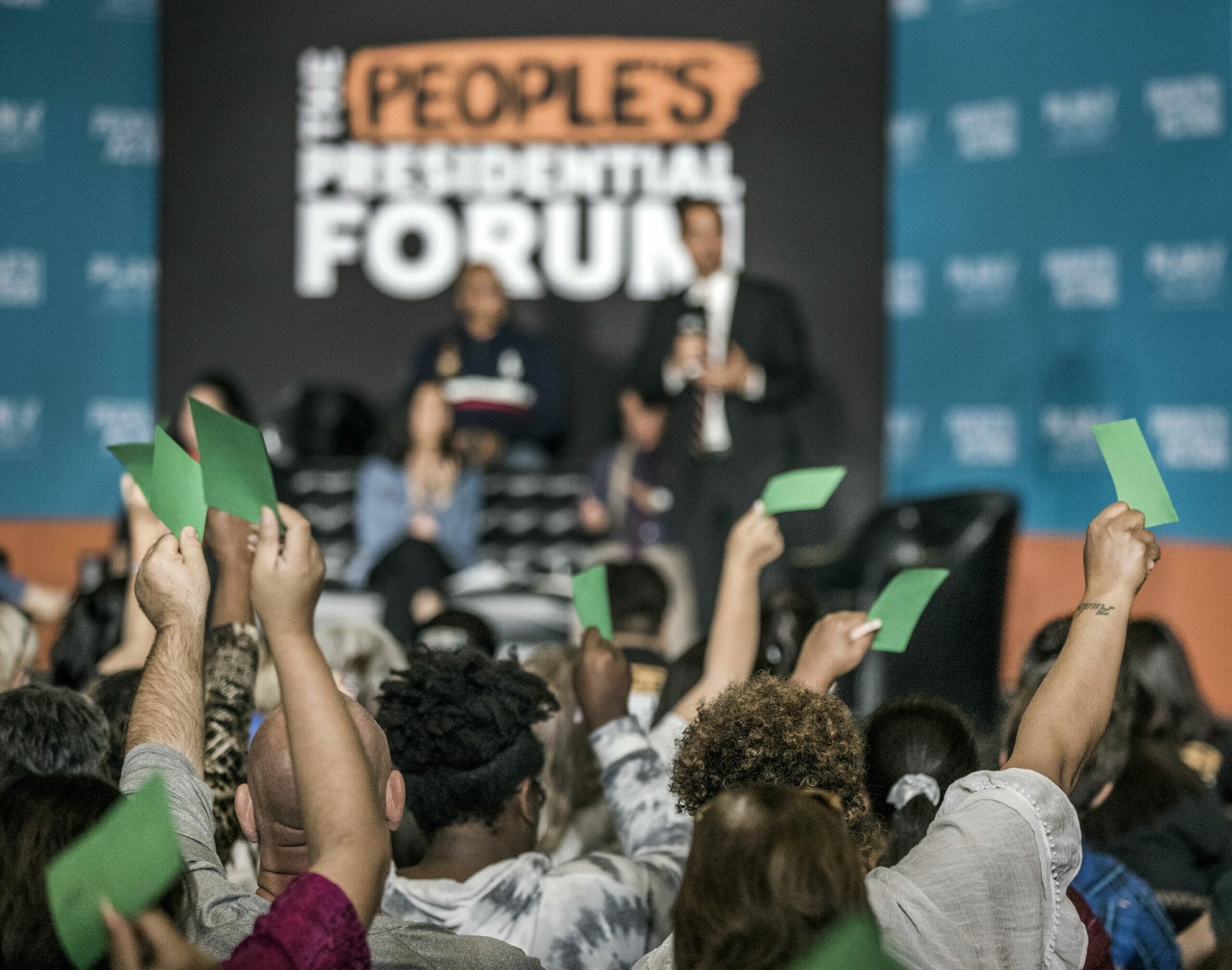 There are 97 days until the Iowa caucus, 116 days until Nevada’s first-in-the-West caucus, and 258 days until the start of the Democratic National Convention, where the winner takes it all.

Until then, the Democratic presidential hopefuls are continuing to voyage out west asking Nevadans voulez-vous support their campaigns in the hope that the state’s Feb. 22 caucus won’t be their Waterloo. The Super Trouper beams were trained over the last two weeks here on South Bend Mayor Pete Buttigieg, tech entrepreneur Andrew Yang and former Housing and Urban Development Secretary Julian Castro — who has continued to ask Nevadans to take a chance on him despite sending out an SOS last week. (Sorry, Fernando, one non-ABBA song link with more details on that here.)

At least 12 candidates will ask Nevada Democrats to lay all their love on them when they return to the state on Nov. 17 for the state party’s First in the West dinner. (“Gimme! Gimme! Gimme!” would be a little demanding, honestly.)

But it really won’t all be said and done until the general election, which is a year from this Sunday. Until then, not a lot of sleep for political operatives or journalists. But that’s just the name of the game.

As always, a reminder to reach out to me with any tips, story ideas, comments, suggestions, and your favorite ABBA song (or just an eye roll emoji) at [email protected].

Knowing me, knowing you: Eager to prove themselves to Nevadans, several Democratic presidential hopefuls have been weighing in on a number of Nevada-specific issues. In no particular order, they are:

The Las Vegas homeless ordinance: Following in the footsteps of former Housing and Urban Development Secretary Julián Castro, Massachusetts Sen. Elizabeth Warren came out last week against a proposed Las Vegas ordinance that would effectively criminalize homelessness. “We should be fighting back against measures that criminalize homelessness – not proposing ones that will only perpetuate it,” she said in a statement. “I strongly oppose this proposed ordinance, which caters to the interests of business groups rather than our families and our communities.” (Her campaign also gave a nod to Castro when releasing the statement, which earned plaudits from his team on Twitter.)

Two days later, billionaire Tom Steyer came out against the ordinance too. “It is immoral and counterproductive to criminalize homelessness. I stand in solidarity with those in Las Vegas who oppose a proposed ordinance that would make it illegal for homeless residents to encamp or sleep in certain areas of the city,” he said in a statement.

The 287(g) program: A few candidates weighed in last week on the announcement that the Las Vegas Metropolitan Police Department had decided to end its controversial 287(g) program with U.S. Immigration and Customs Enforcement. The agreement had allowed Las Vegas Metro police officers to carry out certain immigration-related functions.

A proposed military expansion into Desert National Wildlife Refuge: I reported last week that Buttigieg was against the proposal, which would would remove nearly 300,000 acres from the largest wildlife refuge in the contiguous United States. But he officially addressed the subject while in town this week, promising to appoint an Interior secretary who “believes in protecting public lands, including the Desert National Wildlife Refuge.” (If you read that article, you’ll see the South Bend mayor peppered his speech at Battle Born Progress’s dinner with quite a few Nevada-specific details.)

Steyer also came out against the proposal on Monday. “It is imperative that Congress hear the voices of Nevadans and reject the proposal to expand the Nevada Test and Training Range,” Steyer said in a statement. “It is critical for our government to protect public lands that belong to the American people and refrain from policy decisions that could impact local communities.”

Others against it: Booker, Castro, Sanders and Warren.

The Anaconda Copper Mine: Castro weighed in on groundwater contamination issues related to the Anaconda Copper Mine near Yerington while discussing the issue of tribal consultation at a progressive forum over the weekend. Castro promised to require local governments to seek not just consultation but consent from tribes, including on future mining projects with the potential to contaminate local groundwater.

One candidate who struggled with Nevada-specific issues this weekend: tech entrepreneur Andrew Yang. While at the same progressive forum on Saturday, he struggled to answer a question on building a long-term, high-level nuclear waste repository at Yucca Mountain and wasn’t familiar with the 287(g) program. (He did, however, tweet his support for online gaming over the weekend.)

Organizing in the Latino community: Harris is today announcing her “Latinos Para Kamala” committee here in Nevada. The committee will, according to early details I obtained, focus on recruiting new members, offering guidance on how to mobilize Nevada’s Latinx community, developing caucus education tools and participating in Latino-focused trainings. This comes on the heels of other Latino-focused outreach efforts by the campaign, including its Camp Kamala en Español program. Harris even made waves earlier this year when she offered headsets with real-time Spanish-language translation at a townhall in Las Vegas.

Castro has also been heavily investing in direct outreach to the Latino community while visiting the state. When he was here two weekends ago, he toured Broadacres Marketplace, a gathering place for members of Las Vegas’ Latino community, who come to the open-air market for food, entertainment and shopping.

My colleague Luz Gray and I will be bringing you more coverage of Latino-focused outreach efforts soon, so stay tuned.

Update on Biden ad reservations: It’s still unclear exactly how big Biden’s pre-caucus TV ad reservations are. I told you in the last newsletter that KTNV was the only station in Las Vegas to have filed its paperwork with the Federal Communications Commission, showing a $14,275 buy. Only one more Las Vegas station has filed paperwork since then, KVCW, showing two $75 buys for one spot each on Feb. 14 and Feb. 21.

Nothing has changed on the Reno front either, with KRXI showing a $2,430 buy and KOLO showing a $23,755 buy. Will keep you updated as I learn more.

All quiet on the Labor front? Listening to presidential candidates talk about their myriad health care proposals as they came through Las Vegas, I noticed a common thread — lots of talk about how their proposals would help unions, whether they were pitching a single-payer Medicare for all plan or a public option. But the unions themselves here on the ground haven’t been that publicly vocal on the issue (even as it’s been raised in closed door discussions with presidential hopefuls.)

So, I called many of them up to ask their thoughts. Many of them — particularly those with their own health trusts — are opposed to or have significant concerns with Medicare for all. Others voiced openness to a single payer plan if it could somehow take into account the needs of unions or outright support it.

One interesting detail: The Culinary Union wouldn’t rule out endorsing a candidate who supports single-payer, but Geoconda Arguello-Kline, the union’s secretary treasurer, told me how hard it would be to sell a candidate like that to her union members. (Buttigieg, who favors a public option plan, met with the union while in town last week.) More from me here.

Money, money, money: Democratic presidential candidates received more than half a million dollars in itemized contributions from Nevadans in the third quarter. Biden raised the largest total sum, while Sanders received the most individual itemized donations. If you missed it, I would recommend exploring the graphic I put together that shows which candidate had the most individual donors in each zip code in the quarter.

Mayor Pete + me: I sat down with Buttigieg on our podcast this week to talk about Medicare for all, his relationship with Big Tech, and how he’s positioning himself in the 2020 race. Come for the politics, stay for me asking him his favorite movie with a Nevada scene and what casino game he’d be. Article here and direct link to the podcast here.

Steyer + me: The California billionaire and I also chatted on the phone recently about his debate performance and criticisms that his money would be better spent elsewhere helping Democrats.

Amodei blames ‘fake news’ for Trump campaign snub: Rep. Mark Amodei, the lone Republican member of Nevada’s congressional delegation, blamed a “fake news story from a few weeks ago” on why he was passed over as President Donald Trump’s Nevada campaign chair — a position he held in 2016. It is unclear which story Amodei was referring to, though he did come out in support of Congress exercising its oversight authority through the ongoing impeachment inquiry.

The biennial legislative reshuffling: Five Assembly members are foregoing re-election bids and setting their sights on higher office. Three are running for state Senate, one is running for County Commission and one is running for a seat on the Nevada Supreme Court. All you need to know from Indyterns Shannon Miller and Mark Hernandez and my colleague Michelle Rindels here.

Laxalt beats Amodei in hypothetical head to head: As I mentioned above, it’s been tough sailing for Amodei after he came out in support of the process of the impeachment inquiry. Now, the conservative Club for Growth is out with a poll that shows Laxalt beating Amodei in a matchup by four percentage points. (Laxalt told the Las Vegas Review-Journal that he’s not interested in Amodei’s seat.)

Updated 10-29-19 at 11:17 a.m. to include details of a tweet from New Jersey Sen. Cory Booker about the Las Vegas Metropolitan Police Department ending its 287(g) agreement with U.S. Immigration and Customs Enforcement.