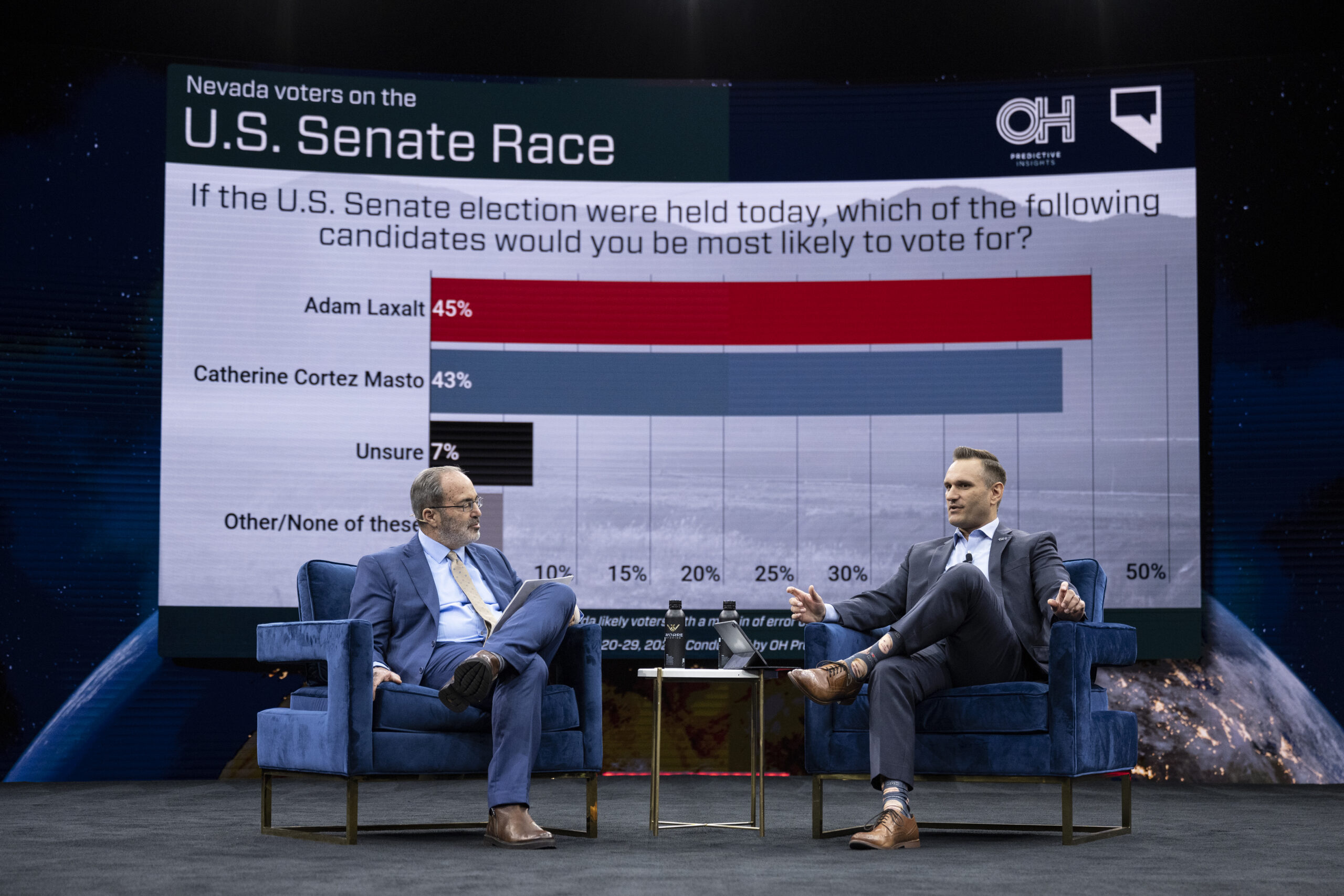 In the high-profile U.S. Senate race, where outside groups are spending tens of millions of dollars to try to swing control of the upper chamber of Congress, Laxalt leads Cortez Masto by 2 points (45 percent to 43 percent).

In the fiery governor’s race, filled with barbs over abortion and crime, Lombardo leads Sisolak by 3 points (45 percent to 42 percent), with likely voters in populous Clark County split evenly at 44 percent apiece between the two candidates. In both races, only a small share of voters remain undecided — 7 percent in the Senate race, and 5 percent in the governor’s race.

The poll surveyed 741 likely Nevada voters via live phone calls and text messaging from Sept. 20-29. The survey had a margin of error of 3.6 percentage points, and surveyed 36 percent Republicans, 36 percent Democrats and 28 percent independents or third parties (the most recent statewide voter registration numbers are 33 percent Democrats, 30 percent Republican and 36.8 are nonpartisan or affiliated with a third party).

Poll results were released at Sunday’s IndyFest, the two-day policy- and politics-focused conference hosted by The Nevada Independent.

“I would say midterm elections are arguably the most difficult to poll because that is truly the guesswork of who is going to show up?” said Mike Noble, chief research and managing partner of the Arizona-based OHPI. “And that truly matters.”

Down the ticket, Republican candidates for statewide office by and large are leading their Democratic general election opponents, including in races for attorney general (where Republican Sigal Chattah leads incumbent Democrat Aaron Ford by 2 points, 39 to 37 percent) and secretary of state, where Republican Jim Marchant leads Democratic challenger Cisco Aguilar by 8 points, or 39 percent to 31 percent. Throughout those down ballot races, roughly a fifth of voters said they were still undecided.

The economy could be a driving force in voters’ decision-making for those races. Thirty-five percent of respondents identified jobs and the economy as a top issue, followed by education (18 percent), health care (12 percent), something not listed (12 percent) and immigration (11 percent). Abortion, a key issue to Democrats’ campaigns since the Supreme Court overturned Roe v. Wade earlier this year, was not listed among the issues.

Click on one of the following subjects to jump to a specific section:

As Lombardo and Sisolak have traded blows over topics such as the Northshore labs testing failure and abortion rights, polling indicates that Lombardo holds a slim lead over the incumbent. Still, as has been the case for months, that lead is within the margin of error.

Forty-five percent of survey respondents said if the election were held today, they would be most likely to vote for Lombardo, while 42 percent said they would most likely cast a ballot for Sisolak. Five percent were unsure, and another 5 percent said “none of these candidates,” which is an option on Nevada ballots.

The results also largely track with a trio of polls released earlier this month showing either a tied race between Sisolak and Lombardo, or a slight lead for the Republican.

Noble emphasized that polling randomizes a sample of likely voters and “sometimes you can get a little bit more Democrat or a bit more Republican.” Plus, as Election Day draws closer, more voters hone in on their choice.

Voters also viewed Sisolak less favorably than Lombardo. Only 43 percent of voters said they viewed the incumbent Democratic governor favorably, compared to 55 percent who said they viewed him unfavorably — a 12-point underwater mark.

The governor is the head of the executive branch in Nevada and is constitutionally granted the “supreme executive power of this State.” This person is elected every four years by popular vote and limited to two terms. Nevada’s governor has the power to approve or veto laws approved by the Legislature, grant pardons and is considered the commander in chief of the state’s military forces.

The newest OHPI result adds to a growing body of public polls that show a race within the margin of error, but also with a consistent — if narrow — lead for the Republican Laxalt.

Still, with just weeks remaining before early voting, the results also show that enough voters remain on the margin to swing the election in either direction. An additional 7 percent of respondents said they remained unsure of their choice for Senate, and another 3 percent signaled they would select “none of these candidates.”

The poll results also show margin-of-error races between Laxalt and Cortez Masto in both of the state’s population centers, with Cortez Masto leading 45-44 in the populous Clark County, and the two candidates in a 43-43 dead heat in Washoe County. The state’s rural counties show a more stark difference, giving Laxalt an apparent lead, as Cortez Masto trails Laxalt 56 percent to 27 percent in those areas.

Complicating the political environment for Cortez Masto is the continuing unpopularity of President Joe Biden, whose approval rating among Nevada voters remains deep underwater even after a late summer bump appearing to stem from the passage of the Democratic spending bill, the Inflation Reduction Act.

Nationwide, Biden’s approval rating peaked at around 43 percent early this month — a surge from a low of 37.5 percent — but has since steadied closer to 42 percent, according to an average tracked by FiveThirtyEight, amid sputtering economic signals and high inflation.

OHPI’s survey results show Biden’s Nevada numbers just under that mark, with 41 percent of respondents giving a favorable view of the president. His unfavorables remain much higher than the national average — 57 percent in Nevada compared to 52 percent nationally.

Republicans have sought to tie Cortez Masto to the White House throughout the campaign, with Laxalt often referring to her in recent months as a “rubber stamp” senator. Still, the OHPI survey showed Cortez Masto with stronger favorable numbers than Biden — if still underwater, 45 percent favorable to 52 percent unfavorable.

Though Republicans candidates for down-ballot statewide offices, including lieutenant governor and secretary of state, all carried leads over their Democratic opponents, the race between Democratic Attorney General Aaron Ford and Republican challenger Sigal Chattah, a civil and criminal defense attorney, marked the closest of the races.

Chattah led Ford by 2 points (39 percent to 37 percent) within the poll’s margin of error, while 17 percent of respondents said they were unsure how they would vote in that race. The close margin marks a continued trend from 2018, when Ford defeated his Republican opponent by less than 5,000 votes out of nearly 1 million cast.

In the race for Nevada’s top law enforcement job, Chattah has repeatedly sought to cast Ford as weak on crime, denouncing Democratic policies that reduce sentences for nonviolent crimes, while Ford has largely avoided direct confrontation with the Republican candidate. In light of a leaked text message from Chattah saying she thought Ford “should be hanging from a (expletive) crane,” Ford has declined to debate Chattah.

Republican election-denier Jim Marchant led Democrat Cisco Aguilar by 8 points (39 percent to 31 percent) — greater than the poll’s margin of error. But another 21 percent of respondents said they are unsure how they will vote in the race, while 3 percent said they would not be voting for any of the listed candidates. Libertarian Ross Crane received support from 2 percent of respondents.

As Lt. Gov. Lisa Cano Burkhead pursues her first full term since being appointed to the role in December, she trails Republican Stavros Anthony, a Las Vegas city councilman who has also ran for Clark County Commission and Las Vegas Mayor, by a significant 11-point margin (29 percent to 40 percent). A large share of respondents — 23 percent — were undecided in the race for lieutenant governor.

The lieutenant governor serves on the governor’s cabinet along with several state working groups, including chairing the Nevada Commission on Tourism. The lieutenant governor also serves as president of the state Senate, a largely symbolic role that involves presiding over daily proceedings and, in rare cases, casting a tie-breaking vote.

Poll results showed Democratic Treasurer Zach Conine trailing Las Vegas City Councilwoman Michele Fiore by 8 percentage points — 38 percent to 30 percent. Fiore, a Republican, initially launched a campaign for governor last year but withdrew and switched races to challenge Conine. A small minority of respondents (5 percent) said they would not vote for any of the candidates, and another 20 percent said they were unsure who they would vote for come November.

In the race to replace outgoing Controller Catherine Byrne, Republican Andy Matthews was favored by 39 percent of poll respondents, while Democrat Ellen Spiegel trailed by 8 points at 31 percent. Like the other races, a sizable percentage of respondents said they were still unsure (21 percent) or planned to support a third-party candidate or the “none of these candidates” option (a combined 10 percent).

Typically one of the least-visible races on the ballot, the state controller serves as the chief fiscal officer of the state, responsible for administering the state’s accounting system, registering vendors, selling claims against the state and collecting any debts owed to the state. Matthews, a one-term Assemblyman, has taken the historically unusual step of running ads in the race.

The first two ballot questions facing Nevada voters appear to have strong support heading into the general election, but Question 3 — which would fundamentally change the way people cast votes — could come down to the wire.

Sixty-two percent of survey respondents said they support Question 1 — known broadly as the Equal Rights Amendment — while 23 percent opposed and another 15 percent were unsure. The ballot question asks voters if the Nevada Constitution should be amended to guarantee equal rights regardless “of race, color, creed, sex, sexual orientation, gender identity or expression, age, disability, ancestry, or national origin.”

Question 2, which would enshrine into the Nevada Constitution a $12-per-hour minimum wage, found similar support, with 63 percent of survey respondents saying they back it. Twenty-nine percent of respondents opposed it, while 7 percent said they were unsure.

Unlike the first two, Question 3, which would implement open primaries and ranked-choice voting, appears the most up for grabs. Forty-percent of survey respondents oppose the question, while 38 percent support the proposed changes. Another 20 percent said they’re unsure, meaning those people on the fence could easily swing the question in either direction come Election Day.

That indecisiveness regarding Question 3 comes despite millions of dollars poured into it. Initiative backers raised more than $2.4 million during the first two quarters of this year, while

Protect Your Vote Nevada, a PAC set up to oppose the ballot initiative, has reported raising more than $1.2 million so far this year and made several million dollars worth of TV ad reservations ahead of the general election.

The latest poll results also show a shift since August, when another The Nevada Independent/OH Predictive Insights poll found that 42 percent of respondents supported Question 3 and 27 percent opposed it, with nearly a third of respondents saying they neither supported nor opposed the ballot initiative.